Get Charged by a Pronghorn

# To the uninitiated, pronghorns may seem like cowards—critters that will turn tail for the horizon at the first hint... 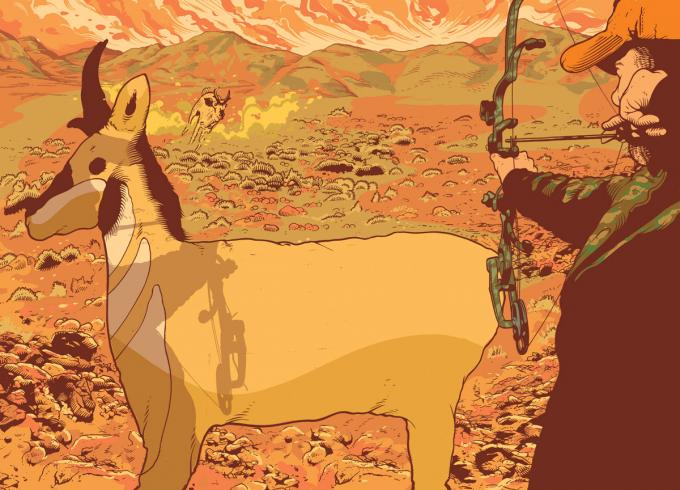 To the uninitiated, pronghorns may seem like cowards—critters that will turn tail for the horizon at the first hint of danger. That all changes during the rut. A dominant buck will run over any interloper looking to steal one of his does. Here’s how to exploit that aggressiveness and bring a pronghorn into bow range.

Take His Temperature
Spend a bit of time watching how the buck tends his harem. Often, he’d rather gather up his ladies than fight a rival. But a buck that’s actively chasing off satellite bucks will be more susceptible to a decoy.

Close the Gap
You want the buck to consider you a threat. Before deploying the deke, get in his wheelhouse by crawling as close as you can. In my experience, 200 yards is the line at which a buck will either fight or take flight.

Don’t Show Your Whole Hand
Pronghorns have remarkable vision and can spot a fake from a long ways. Use a hill, coulee, or other change in contour to keep the lower half of the decoy, and you, hidden from the buck. Presenting a smaller silhouette also gives the charging buck confidence he will win the fight.

Fire When Ready
Three things can happen when a rutting buck gets too close: He’ll see you, wind you, or run you over. If any of those occur, the jig is up—so take your shot as soon as he steps inside your maximum comfortable range.

Must-Have Gear
Sometimes a buck won’t run off a challenger, but he almost always will round up a stray doe. The Antelope Buck & Doe combo ($120; ­montana​­decoy.com) offers options. The collapsible dekes are light enough that both will fit in your pack.

Watch a Pronghorn Wake Up

➞ Sandbur thorns—each good for a blister—are stuck in my legs and arms. I started the day with a pair of kneepads, but this buck was in a perfect spot when I saw him—a little flat at the base of a bench—and in my haste to get on top of that bench, I left the kneepads in the truck.

That was three hours and a miss ago. After I shot over his back, the buck and a dozen other pronghorns with him ran 100 yards and bedded at the head of a shallow drainage. I made another circle and crawled into the drainage, where the sandburs were especially lush. I kept going. When the ditch played out, I could see the buck’s curled horns 70 yards ahead. I rested the muzzleloader across my pack.

I’ve been at this now since daylight. An inner voice—one sounding like an impatient little boy—tells me: Throw a rock at him. Make him stand up so you can shoot him. I ignore the voice, comforted by the fact that antelope seem to bed frequently during the day, but rarely for long. After 15 minutes, I see the horns sway about, and then the buck’s rear end comes up. His shoulder appears beyond my front sight a second later. All I have to do is aim and squeeze the trigger.