Shadowing a herd and saddled with little more than a sleeping bag and tarp, a backcountry hunter increases his chance... 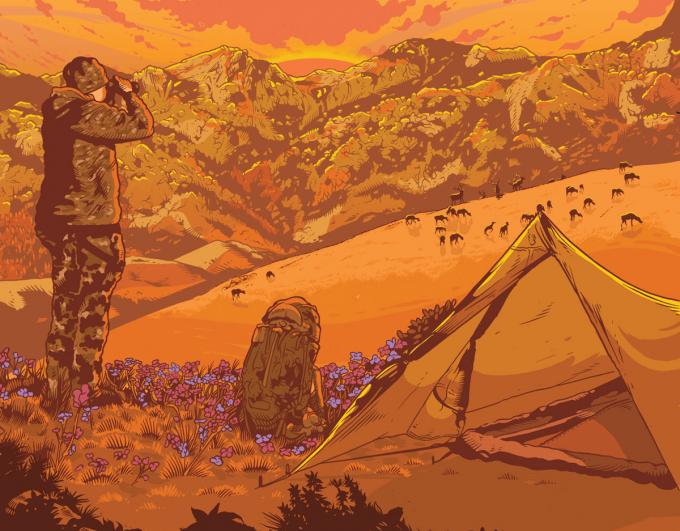 Shadowing a herd and saddled with little more than a sleeping bag and tarp, a backcountry hunter increases his chance of killing a world-class bull. The real thrill of a bivvy hunt isn’t about the score of the antlers. Instead, it’s the experience of living with a herd for days until the perfect shot presents itself.

Go Deep
One mile from the trailhead, you’ll leave most of your competition behind. Three miles or more, you’ll have the mountains to yourself. On day one, hike as far as you can, then spend the rest of your hunt shadowing the herd.

Camp Close
Pitch your tarp within earshot of the herd—no farther than 1⁄2 mile. Pay attention to the wind: Cool air will seep down the mountainside through the night, taking your scent with it. Set up accordingly. If you have an idea of which way the herd will head in the morning, camping in front of them increases your odds dramatically.

Catch a Nap
Elk typically bed down for the day from 10 a.m. to 2 p.m. Slip in close, find a spot with a steady wind, and rest up. When the elk start moving again in the late afternoon, you’ll be in a great spot to catch a trophy bull off guard.

Hit a Track
One of the best things about hunting elk with camp on your back is following a trail wherever it goes. Post-rut, a single set of tracks in the snow often indicates a bull that has separated from the herd to rest and recover. Slow down and step lightly through thick timber to catch a glimpse of what may very well be the biggest bull you have ever seen.

Must-Have Gear
At just 26 ounces, stakes included, the Tarptent ProTrail ($209; tarptent.com) delivers maximum coverage at an amazingly light weight. It pitches quickly and easily with just one walking stick or stout branch, yet offers ground protection thanks to an innovative bathtub-style floor.

Cook the Best Wild Game of Your Life

➞ In the cool drizzle, I fished two thin strips of meat from the pack leaning on a nearby fir. The tenderloins were still warm, fresh from the caribou whose bones now lay scattered on the tundra. I rinsed them with water and skewered each along a length of willow. My friend Mark and I hadn’t thought to pack any salt or pepper, but tenderloins this fresh don’t really need any; they require for seasoning only the excitement and satisfaction of a difficult hunt. Some char from a hot fire doesn’t hurt.

Delicate tenderloins don’t age well; it’s as if they were made to be eaten immediately, at the site of the kill—a tribute to the animal and gift to the hunter for his honest work. I passed a willow to Mark. We held them over the fire, just close enough to get the outside crisp in places. Neither of us waited long before taking the first bite. The tender meat tore away easily, revealing a perfectly cooked center, red with the life’s blood of the bull. —D.D.