The Homestead Hunt: When People Move Out, Bucks Move In

Illustrations by Mike Sudal The sight was surreal. I was still-hunting when I stumbled upon an abandoned, ramshackle home with... 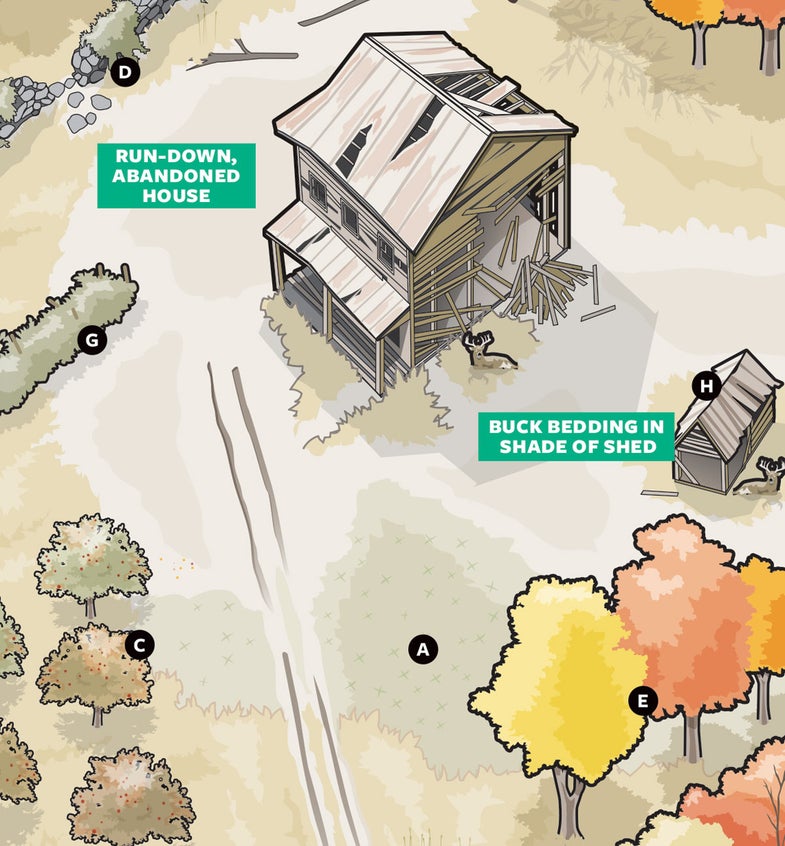 The sight was surreal. I was still-hunting when I stumbled upon an abandoned, ramshackle home with one wall missing, no windows, and a caving-in roof. As I looked at the dilapidated building, an 8-point buck exploded out of the living room and disappeared into the woods. I stood there, stunned.

That was my introduction to hunting abandoned homesites. Although I’ve rarely found bucks inside them since then, these neglected properties have proved to be magnets for bucks. Typically they’re bedded in the shade of the building or hunkered in nearby shrubs, hedges, and grasses.

What Attracts Them?
Bucks seem to be drawn to the building itself, much like bass hang out near structure. They find three important things there: edge habitat (where the homestead adjoins surrounding woods), a variety of leftover foods in the yard, and prime cover. But not all sites are equally productive.

Those that are far from roads and parking areas are most likely to harbor deer. Also look for ones that have been neglected for several years and have become overgrown with cover. Those in or bordering woods are best.

Find them by scouting and poring over topo maps and satellite images. Plot their locations on a map or GPS. When you visit one, look for the key features below. The more a site has, the more likely you’ll find a mature buck in residence:

(A) Some yard left with clover
(B) Privet hedge, viburnum, rhododendron, or other edible shrubs
(C) Fruit trees
(D) Stone walls overgrown with honeysuckle and greenbrier
(E) Oak trees that produce lots of acorns because they’re not crowded
(F) Tall grasses that a buck can bed in while soaking in warm winter sunlight
(G) Grapevines that offer both food and cover
(H) Sheds and barns (sometimes several worn-out bucks will share such a site following the combative rut period)

Morning and Evening Hunts
While a buck may make an abandoned farm his home base, he will leave to feed and chase. That’s your chance to intercept him.

For a morning hunt, plan a route to the site that you can navigate in the dark, such as an old driveway you could walk partway. Settle in before he returns from his night’s feeding and make sure you have a clear view of where the trail enters from surrounding fields.

In the afternoon, find tracks leading toward the nearest food plots, cropfields, or woods with acorns remaining. Set up downwind nearby, as close to the structure as you dare.

If you kill the resident buck, expect another one to fill the vacancy by next season. Miss? He’ll likely be back in a few days. That’s how long it took the 8-pointer that I mentioned earlier to return. This time I was ready.