The Rut Drive: How to Give Bucks a Little Bump

Photograph by Peter Bohler Most hunters save drives for the late season. Deer are holed up in pockets of cover... 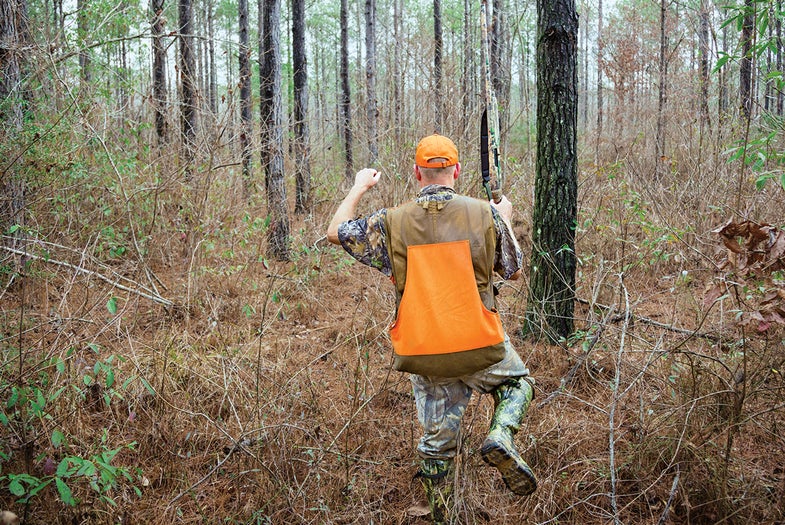 Most hunters save drives for the late season. Deer are holed up in pockets of cover then and aren’t moving much—perfect circumstances for organizing a drive to get those bucks out of hiding.

But the peak breeding period presents a nearly identical situation. Bucks are hunkered in cover, and not moving much, because they have what they want: an estrous doe. Their urge to stay with that doe and breed her can actually make drives during lockdown even more productive than late-season ones.

When those late drives occur, survival is a buck’s only goal. But during the rut, he has conflicting urges—breeding and survival—which make him less likely to abandon his mate and slip out some overlooked escape route.

Two kinds of drives work now: a two- or three-hunter “bump,” used when you have pinpointed a breeding pair in an isolated pocket of cover or have encountered them there before; and one that targets large areas of doe habitat that bucks are visiting now.

Think small for these drives. Likely spots include islands of tall weeds in a field, thickets of saplings and deadfalls, brushy cover behind a dam, clusters of cedars in a fallow field, brier patches next to a farm driveway, points of cover jutting into a field, or patches of brambles next to a rut chasing area.

Determine wind direction as well as the nearest thicket where the pair may seek refuge. Place a hunter downwind near that spot. Have one or two hunters sneak toward the pair or the suspected lie, with the wind blowing crossways or toward the deer. Their job: Bump the doe. The buck will follow. Since these are isolated cover patches, the pair will naturally flee to the next thicket.

For these drives, rely on your scouting knowledge of where different doe family groups hang out in semiopen pockets of pines, shrubs, plum thickets, laurel, raspberry, and honeysuckle near major food sources or stream borders. Bucks weren’t here a month ago, but now they’re dropping in between breeding sessions to hook up with another estrous doe.

These 2- to 5-acre core doe areas aren’t as tightly defined, so you need four to six hunters to drive them. Put standers where the cover peters out, at the starting point, and on any side ditches, fingers of vegetation, or funnels where an estrous doe may bail out from the group and entice a buck to follow. Push slowly with a crossing wind or tailwind.

Most bucks will stay with the estrous doe when she jumps, but be alert. Some older bucks will hunker down because they know where the doe will go and can find her later.

Work the area thoroughly, and pause occasionally so that you’ll cause any nearby skulking buck to break out. And be ready at the end. These educated bucks may burst out minutes after the drive, when most hunters are downing sandwiches with their guns propped against trees.