The Trophy-Room Chart: Size Up Your Prize

Size Up Your Prize Your down-and-dirty guide to field judging a shooter Elk The wider the “whale tail,” formed by... 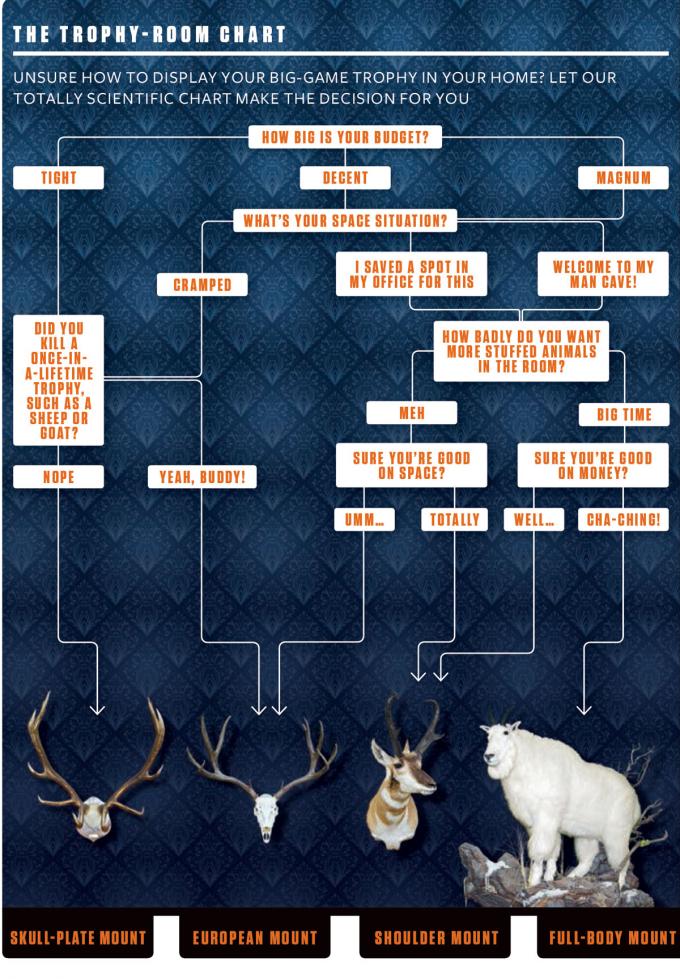 Size Up Your Prize

Your down-and-dirty guide to field judging a shooter

Elk
The wider the “whale tail,” formed by the split of the fifth and sixth antler tines, the better the bull.

Bears
Big boars have a lot of space between their ears. If there’s a crease down the middle of his forehead, stop judging and shoot.

Pronghorn
Don’t get fooled by length on a pronghorn buck’s rack. Paddles that fork high up the horns are where inches add up.

Mule Deer
Four points per side is standard, but look for an inside spread outside the ears, generally 20 inches apart or more.

Bighorn Sheep
Be prepared to spend a lot of time glassing. You want to find a ram with deep, heavy curls that fall below his jaw.

Moose
Not hunting under any antler restrictions? Shoot the first mature bull. It may be the only one you see. Trust me. —D.D.

Where to Draw a Dream Tag

★ As manager of Cabela’s T.A.G.S. license application service, Eric Pawlak has the inside scoop on some of the West’s best hunts. Here are his top three picks.

New Mexico Ibex: Native to the Middle East, bezoar ibex now make their home high in the rugged Florida Mountains. “A fabulous opportunity for a species you normally have to travel thousands of miles to hunt,” says Pawlak.

Arizona Elk: Hunters need at least 16 points to draw an early elk tag, but late rifle hunts typically require just 6 to 8. “After the Wallow Fire a few years back, these eastern Arizona units are absolutely amazing.”

Utah Mule Deer: Drawing a tag in the Henry Mountains can take a lifetime of applying, but the unit offers an opportunity at a 200-plus-class muley. “Without a doubt the best place in North America to hunt giant mule deer.” —D.D.