Back Outside: A Wounded Soldier Returns to the Field

Editor’s Note: This interview is excerpted from a piece that originally ran in the Dec./Jan. 2009 issue of Field &... 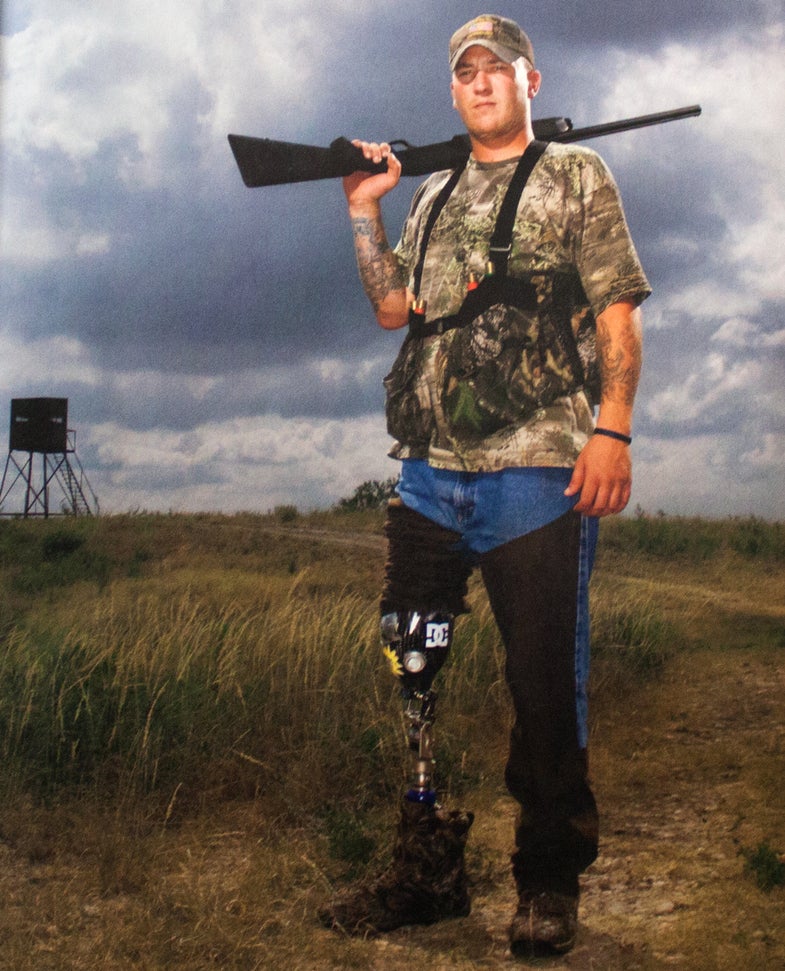 Editor’s Note: This interview is excerpted from a piece that originally ran in the Dec./Jan. 2009 issue of Field & Stream. We’re sharing portion of it here in honor of Veterans Day. Photograph by Brent Humphreys.

Beintema, 26, grew up hunting pheasants and doves in Lodi, Calif. A 19D Cavalry Scout, Beintema was injured by an improvised explosive device (IED) in Tal-Afar, Iraq, and returned to the U.S. in May 2005.

I grew up bird hunting—mainly doves and pheasants—due to the fact that there’s not huge deer or anything like that in California. Bird hunting was fun because I’d compete with my dad or my cousins. And once I started eating these birds, I realized they tasted good, too. The best part was just going out with my dad or my buddies and getting away. There was no b.s. out there—just whatever you bring with you.

My favorite gun would have to be my Remington 870 pump. I’ve had it since I was 16. There’s nothing fancy about it, but the things I’ve done to that gun: I’ve dropped it out of the truck. I’ve dropped it in the water. And it still works.

It was supposed to be just a regular convoy patrol. I remember punching one of my buddies as I smoked a cigarette in the back of the vehicle, and that’s about it. My friends who were there said I was screaming and yelling after the IED exploded, but I don’t have any remembrance of that. I woke up about a week later, and I couldn’t talk because my jaw was wired shut. I saw my mom, and I started writing on a dry-erase board, telling her to get out of Iraq. That’s when I found out I was in the U.S. at Walter Reed.

The tried surgeries on my right leg during the first eight months, but it was pointless. I was never going to have feeling in it again. Finally, I told them to take it off.

My desire to hunt kicked in even more after I got hurt, because I had nothing but time. And I didn’t wait to get my prosthetic before I went on my first hunt. They had me sitting in a handicap blind that uses hydraulics to rise about 15 feet in the air. We saw some does, and I was going to shoot one, but then a 4-pointer appeared and stopped about 20 yards from the blind. I pulled the trigger and then let out that last deep breath. I couldn’t see with all the smoke from the black powder, but I could hear the buck kicking in the bushes, so I knew he was down. My hands were shaking. It was really exciting. That was my first deer—the first time I’d shot anything larger than a bird. Since then I’ve shot does, teal, doves, my first Rio Grande turkey, and javelinas.

Getting outside in general felt great. I was more mobile than I’d been in eight months, and I thought, If my ass can crutch out here in the snow, I should be able to go do anything with my prosthetic.

Everyone and your mother came to visit it me in the hospital: President Bush, Donald Rumsfeld, Tony Hawk, Henry Rollins, Drew Carey, Toby Keith—even Niki Taylor, the model. She got in my bed next to me, and I never wanted her to get out. I’ve got pictures to prove it.

After I’d gotten my prosthetic, I was pheasant hunting in Minnesota and I misplaced my foot and fell into a creek. It was colder than hell. After that, I learned real fast to watch where I’m walking.

I’ve had to make a few little adjustments when I hunt. Pants can be annoying to put on because of where the socket is on my prosthetic. I like hunting in Texas because I can wear shorts. Boots with flat bottoms are the best to walk in, because ones with an arch make it tough to know when to kick my prosthetic out. And waders are a real pain in the ass. I was wearing them on a duck hunt, and to have to pick my right foot out of the mud and kick my leg through the water didn’t work out well.

Once I got my prosthetic, I found the best physical therapy is just living your life.

My favorite thing to do is dove hunting. That and pig hunting—I love pork.

Those mornings before a pheasant hunt back home when I go downstairs and my dad’s drinking coffee, and our black Lab, Jake, is going psycho because he knows what’s coming…and when I sit down and Jake won’t get off me, or when I bend to put on my boots and he jumps on my back: Those are the things that make me happy and make me laugh every time I think of them.