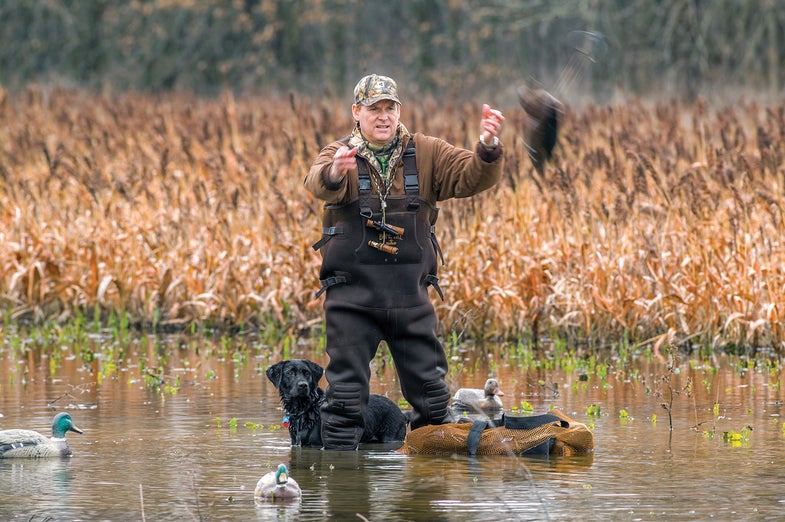 His Secret
For Soderquist, it’s all about providing a season-long buffet. In a major wintering area like the Texas Gulf Coast, ducks frequently pile into favored spots and stay put. He and his buddies make their lease into one of those hangouts by surrounding a large roost pond—a 90-acre flooded field—with smaller satellite ponds that are full of duck food. “We try to set up our habitat so that there are different foods maturing throughout the season,” he says.

The lease is a working rice farm; two yields are the norm in South Texas. The first crop is cut in late July or August. The second—called the ratoon crop—is usually cut in October. Because flooding is a part of the rice-agriculture process, the fields are magnets to ducks.

But Soderquist doesn’t stop there. He manages other ponds for moist-soil vegetation and plants still more crops like Japanese millet. “Many hunters are intimidated at the thought of planting and flooding crops for ducks because of federal baiting laws,” Soderquist says. “But if you simply adhere to the language, which isn’t complicated, there’s nothing to worry about.”

His Method
For fields to be planted, Soderquist starts plowing in late June and begins planting by the Fourth of July. As he broadcasts the seed and rolls it in, he leaves an open hole for decoys directly in front of the typical blind locations.

Ideally, the millet is 14 to 16 inches tall with a good seed head by the September teal season. And just as that hunt begins, the landowner begins flooding the ratoon rice crop. “Timing is everything,” Soderquist says. “When the farmer floods his second crop, we get our duck water, and a new food source.”

✖”We use stand-up blinds on skids and layout blinds to move to where the ducks want to be.”
✖”Texas-rigged decoys let you set up and pick up fast. The sooner you can get out of a field and let the ducks have it, the better.”