Kill a Superbuck: The Old Phantom 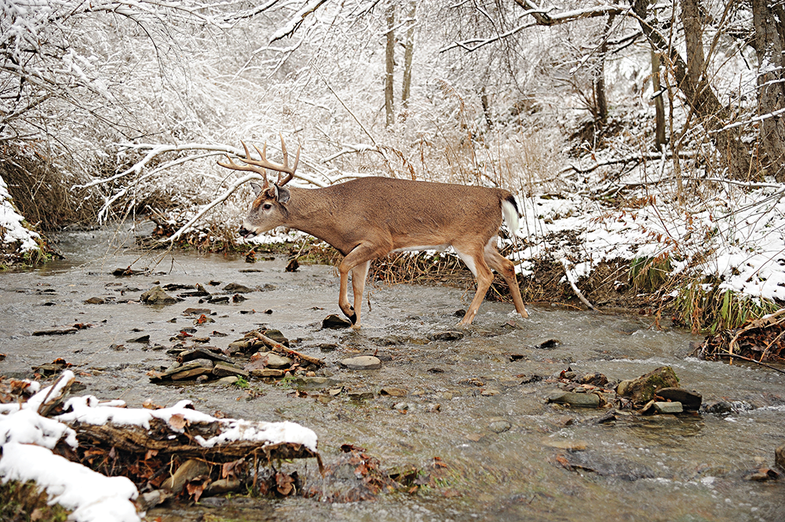 ■ “During the 2006 season I started getting trail-cam photos of a really nice buck for our area,” says Adams. It was a clean 8-point with a big body, and easy to spot on camera because he had a damaged right ear that hung down along his neck. Although photos showed that for two years straight the buck was all over the 700-acre tract ­Adams hunts, none of his hunting party ever laid eyes on him.

When the 2008 rifle season opened, ­Adams decided he needed to try a different area on the farm. “I own 35 acres behind our cabin that everyone usually ignores. On the fifth day of the rifle season I headed to that area.” There was a standing cornfield and a small creek flowing along one edge, with very dense brush on the other side. “I set up right along the creek; I just stood behind a big boulder and looked downstream at a crossing that deer would use heading out of the brush to the cornfield.”

Right at last light, Adams heard a deer coming to the crossing. “When it got to the bank I could see it was a good buck. I took the shot, and when I walked up to the deer I knew instantly it was that broken-ear buck.”

Later Adams pulled the jawbone and sent a tooth in to be aged; the buck was 81⁄2 years old. “That was more exciting to me than any antler score.”

■ Adams’s buck is a perfect example of a hard-hunted deer that was hyperaware of its environment. “I think he did a wonderful job of patterning us,” Adams says. “He knew exactly where our areas of greatest activity were, and he adapted. Shooting him in that overlooked spot totally changed how we hunt the property.” Since then, his group has gone out of their way to hang stands in new spots, and it’s made a huge difference. Sixteen of the last 17 shots at bucks have come from new stands. As hunters, it’s very easy to fall into a routine, but super­bucks will simply relocate. “That buck taught us to be less predictable, and to constantly search for new spots.”