Now Is The Time to Stalk Mule Deer With a Muzzleloader

The sun is a hint below the horizon, but already the wind is howling. In December on the plains, the... 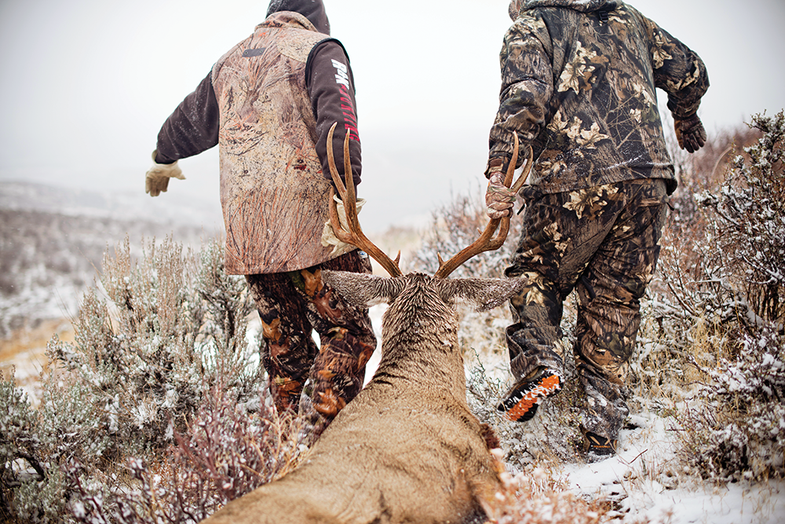 The sun is a hint below the horizon, but already the wind is howling. In December on the plains, the wind always blows, but rarely at this clip this early in the morning. And by the looks of the dark clouds pushing in from the West, a snowstorm is coming. I’ve got an hour, maybe two, to punch my tag before the blizzard makes conditions too tough.

Here in Nebraska, muzzleloader season lasts all of December, and it’s my favorite time to stalk big mule deer. I’ll get out every day I can until my buffalo bullet intersects with a good buck. The first few days of the season see some pressure, but after that I have the breaks above the river all to myself.

I’m hunting two particular bucks this year—one is a wide 4-pointer with distinctive brown tines, and the other has a tall and deep rack. Either would make a fine trophy. I last saw them the day before rifle season, and now, two weeks into December, they’re still absent. I’ve been on a few smaller bucks, but 4×4 and Tall Boy are no-shows. I start to wonder if they’re already in other hunters’ freezers. Still, I’m hopeful. I keep hunting.

Vast and Blast
Spot-and-stalk hunting is an even bigger challenge in this wide open country. Almost always, the deer spot you before you see them. So I focus on figuring out their patterns until I can put together the puzzle of knowing where they’ll be and when. Then it’s a matter of getting within 100 yards.

A scoped in-line muzzleloader would stretch that distance to 150 yards, or even 200. Although Nebraska allows the modern guns, I still prefer to carry a traditional blackpowder rifle. With the crowds gone, I don’t feel disadvantaged, but the Hawken’s limited range, coupled with open sights (and my aging eyes), makes tagging December’s deer more challenging and rewarding.

Each day I’ve been out, the hunting has improved now that the deer are back on the feed. They filter out of the canyons to the few winter wheatfields that line the edge of the tableland. Typically, the muleys retreat to their hides well before light and return just as the shortest days of the year come to an early end. A winter storm can alter that pattern, driving the deer to forage longer, even during the middle of the day.

Over the last two weeks, I’ve developed a routine, hiking a wide arc along the high ground south of the only ag field for miles. This gives me a good vantage point to glass the green wheat from downwind before circling to the deep and narrow canyon where the deer have been staging.

Since I’m on the move for most of the hunt, I forgo a spotting scope. Instead, a pair of light 12×42 binoculars hang from my lanyard, providing enough zoom to pick antlers from the buckbrush. I also ditch a heavy pack and instead fill my vest pockets with just the essentials: a knife, matches, a few spare bullets, and a powder flask. The powder measure and capper are knotted to a shoelace around my neck. A single nod to modern technology—a small rangefinder—hangs like a quick-draw holster at my hip. The open landscape plays tricks on the eye, making big-bodied bucks look closer. More than once I’ve sent a heavy-lead buffalo bullet into the frozen dirt well short of its target.

Stop Cold
The wheatfields are already empty at dawn, but I catch sight of a lone doe as she drops off the horizon into a deep canyon where I’ve found deer before. I hustle over there and am sweating by the time I reach the ridgeline, but the shivers start as soon I drop down and start my belly-crawl to the edge. The first wet snowflakes paste against my face. Visibility is dropping fast.

I slide a cap onto the nipple and check the sights. Two weeks of hunting and this is the first time I’ve primed the Hawken. As I crawl those last few yards, snow pushes up my shirt, further tightening the predatory coil inside me. My eyes adjust their focus through the flakes and I spot 4×4 first, standing across the narrow canyon. He looks my way, then glances behind him as Tall Boy comes down the trail. I’m relieved they’re alive, as if seeing two old friends again. I swallow to push the heart in my throat down and rise to my elbows. The wind buffets me as I aim—first at 4×4, then at Tall Boy. Each buck disappears behind the iron front sight. I don’t need my rangefinder to know the shot is too long.

Just below me I hear the doe blow up with a snort, catching the attention of the bucks. They both follow her over the fence and onto the neighboring ranch. If I had a modern muzzleloader, I’d be punching my tag, but I’m not disappointed. Now I know both of the big bucks are out here. And I’ve still got two more weeks.