The Mount: Memories of a Father and His Old, Giant 9-Point

Photograph by Henrik Knudsen When I was younger, I never thought it would end this way. Not that I spent... 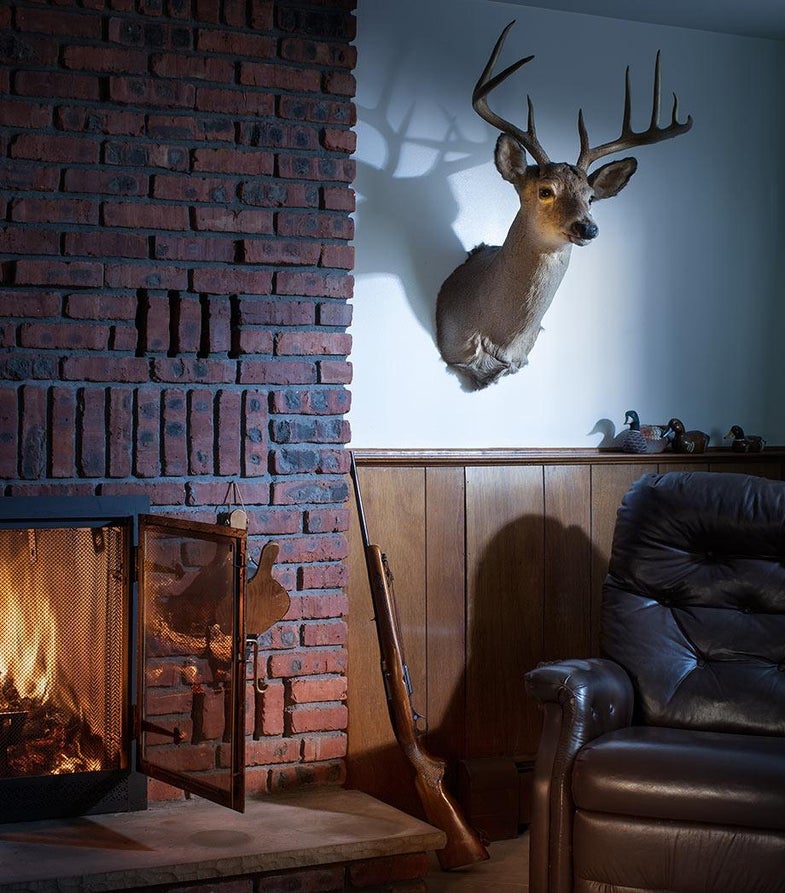 When I was younger, I never thought it would end this way. Not that I spent a lot of time pondering my father’s death when I was a teen, but for those few moments when I did, the image that came to mind was of our reminiscing about the good times: The white-antlered Pocono swamp buck that he’d shot and that I’d trailed and found a half mile away on my first ever real deer hunt. Those early Saturday morning fishing trips we’d taken in the little Starcraft cartopper, when every keeper largemouth and pickerel went on a chain stringer that I couldn’t resist pulling up and inspecting every 10 minutes. The giant, wild Fishing Creek brown trout with dime-size spots that he caught on an Abu Garcia Reflex spinner on a rainy opening day in the 1960s. And the one that I had on in the same stream in the 1970s for about three seconds, long enough to make my knees buckle in my waders as it disappeared forever into the deep, glassy green hole beneath the giant boulder that resembled a monument.

Instead, it ended with him unconscious in a hospital bed after I hadn’t seen him or spoken to him for 12 years.

Watching his chest rise and fall with each push of air from the respirator, I told him that I loved him and I was sorry that things hadn’t worked out. I told him all was forgiven and that I would take care of Mom. I put my old camo cap on his bed so he’d see it if he opened his eyes. I cried a bit. Then I drove to his house, walked into the downstairs room where his trophies were hanging, and looked, as I had thousands of times before, at the mount of the tremendous buck he’d shot five decades ago.

The insidious effects of alcoholism are well documented, but they’re often ignored by both the one suffering from the disease and those in the alcoholic’s life. For me, they were just a part of my father, because I’d never known him any other way. The abrupt mood swings—the friendly and fun-loving guy at the dinner table or the party or the deer camp who could suddenly turn hateful and vicious—well, that was Dad. The great opening-day trout excursions and weekend hunts for pheasants and rabbits were sandwiched by events such as his drunken screaming at my mother at midnight and finding him passed out at the kitchen table. If you don’t know your father any other way, it’s your normal.

As I got older I got into more fights with him. Part of it was the typical rebellion of a teenager being quelled by a parent, but there was another, darker element to it. Any difference between us, even if it was over something as insignificant as an opinion about a bass lure, could be rectified only by total surrender on my part. If I didn’t agree with him, I wasn’t just wrong, I was selfish. This, I realized later, was when the talons of the disease had started piercing deeper into his brain and begun the process of taking away the man I knew. But Mom wouldn’t leave him, I had no siblings, and I simply accepted the situation.

In my 20s, out of the house but remaining a dutiful come-over-on-the-weekends son, I began having solo “interventions” with him, although I didn’t know then that that was the term for confronting an alcoholic about his addiction. Yeah, I know I drink too much, he’d say every time, and afterward he’d drink less…when I was around. When you grow up in a household in which the predictability of a day was indicated by the amount of alcohol someone has consumed, you gain the ability, based on behavior, to decipher just how much. He never stopped. Several times I severed all ties with him, but eventually he’d reach out to me, and we’d go hunting and fishing together like we always did. But the bottle would always show up, and so would his angry demands of me to agree with all that he did and said, and his hostility toward everyone who didn’t.

Getting married and having two children proved a great distraction, at first. Whenever we’d get together, he’d put off the serious drinking until later. But that didn’t last, and I did a fine job of ignoring or deflecting the anger that he began directing toward my new family. But it had begun eating at my soul.

The terrorist attacks of Sept. 11 changed the way many Americans looked at the world and themselves, and I was no exception. In the days and weeks that followed, when all the terrible stories came out about the thousands of moms and dads who went to work that day but never came home, I thought about my wife and young children and what I was to them; what I needed to be. And I thought about the awful regrets I would’ve had if I’d been in one of those buildings instead of my own office less than 3 miles away, and had looked out the window to see death coming right for me.

I realized I’d been concentrating on walking the infinite tightrope that Dad’s drinking had stretched between him and me, keeping balance by rationalizing his behavior caused by the disease, and by accepting the anguish it caused. And I saw that I’d put my own family on that tightrope right behind me. If I fell off, they’d fall with me. In October, when I received yet another thunderous phone call from him about some perceived slight and with yet another irrational demand, I pleaded with him to stop. He didn’t, and I hung up on him for the last time.

Through it all, the mount was there. It was the first thing he carried inside the new house when my parents and I moved out of our apartment. Except for when the walls were being painted, it never moved from its spot on the right side of the fireplace. When I was a little kid I’d watch him carefully clean and polish the antlers before the holidays. He’d even use my mother’s hairspray on the hide. He had other mounts, but none with more mojo. I’d heard him tell the story about that buck so many times, often at my urging, that it became a memory of my own, something I play over in my head while sitting in the deer woods, waiting for shooting light.

A small-game hunter since he was a kid, my father had started out deer hunting as an adult without any good idea of how to go about it. He’d told me stories of walking through the woods not knowing what to do—jumping in front of boulders, marching around barren woods, looking for deer. But he joined a local hunting club, and he learned quickly. And he loved the sport, so much so that he and a friend booked a hunt in Nova Scotia—the deer hunting mecca for East Coast deer hunters back then. I was about 5 years old, and all I really remember is him wearing a solid red Woolrich coat in the little apartment, and then he was gone.

When he got up there he found that his guide was a Native—a Mí’kmaq—and an expert woodsman, one of the few men I’d ever heard my father speak about respectfully. The Nova Scotia camp had a range of hunters, from those who had booked a hunt just to get away from home to those who came to get a once-in-a-lifetime chance at a trophy northern whitetail. My father was one of the latter. But as the week wore on, and more and more deer were getting hung in the shed as he spent day after day still-hunting fruitlessly with his guide, he felt frustrated. All that money, all that vacation time, and nothing to show for it.

But the guide was unconcerned. “We walk,” the guide would say every morning, and so they would.

On the next-to-last day, they were slowly working through an immense stretch of blowdowns, my father lifting one foot and then the other, over and over, tired and dispirited, knowing the hunt was nearing its end, but still hunting hard, staying quiet, scanning the woods. And then, suddenly, the buck. “One second he wasn’t there. The next second, there he was,” Dad had said. A high and wide 9-pointer that would dress out at 195 pounds, with a rack nearly perfect in symmetry except for the missing G4 on its right side, it was the biggest deer that Dad had ever seen in his life—even in pictures.

My father quickly raised his Winchester Model 100 semiauto, aimed through the open iron sights, and put a 180-grain Silvertip from the .308 into the deer’s shoulder. The buck went down, Dad ran up for the coup de grâce, and he got his first clear look at the buck of his lifetime.

For years he kept a picture of the deer. I can’t find the photograph now, as I clean out his desk and closets and put his life away, but I close my eyes and it’s there. It’s a big vertical print stored in a cardboard folder of the type that school student portraits come in, taken when color photography had just gone mainstream. He looks a little bit like me when I was in my 20s. The whiskers on his face are thick and black from not shaving for a week. He’s wearing a checkered wool shirt and suspendered red britches, standing next to the freshly killed buck hanging in a shed. It’s impossibly huge, more moose than deer, stretching from the rafters way above his head all the way down to the ground. He’s smiling and his eyes are on fire with the exhilaration of a hunter who has just shot the biggest buck he’s ever seen, and, as it turns out, he’d ever see.

That’s the man I will remember—a young hunter who literally danced among the blowdowns deep in the Nova Scotia woods after killing that deer, so happy that he kissed the deer. And then kissed the guide on the cheek. And then kissed the deer again, laughing and not caring what the guide or anyone else would think about his doing such a thing. I open my eyes and again see that old, giant 9-point on the wall, and think about the joy it gave my old man, and me, and I smile.