Photographs by Tess Rousey Chad Yamane has a plan. The Salt Lake City firefighter and guide for Fried Feathers stashes... 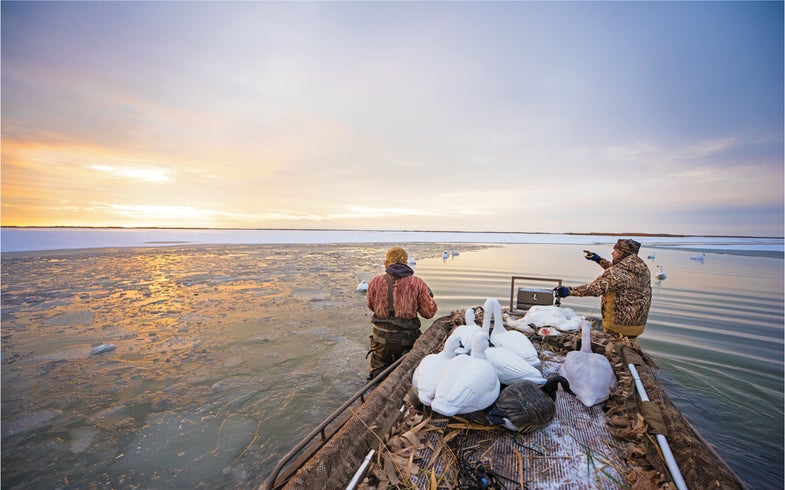 Chad Yamane has a plan. The Salt Lake City firefighter and guide for Fried Feathers stashes a pick-head ax in the bottom of his aluminum boat, and together we push the floating blind into the slush of Utah’s Great Salt Lake. Somewhere out there, Yamane hopes, is open water, where we may still have a chance to call a tundra swan into range.

Last night, the saltwater basin locked up under a sheet of ice. A brutal November storm had rolled in, stranding motorists across the Northern Rockies and scattering the 12,000-plus tundra swans resting on the nearby Bear River Migratory Refuge. Most of the birds have now flown south, winging with them my odds of filling the swan tag I waited three years to draw.

If Yamane has any doubts that we’ll make it out onto the lake, he doesn’t let on. Whenever the boat grinds to a halt in the freezing slop, he simply puts the motor in reverse, backs up a few feet, then guns the engine. As ice scrapes against the aluminum hull, I can’t help but worry we’ll soon get stuck for good.

Ice Breaker
When we eventually reach a small open hole just off a point of bulrushes—no ice-breaking ax required—Yamane and I begin to set the spread. Other than the ax, hunting swans doesn’t require much specialized gear. On the Great Salt Lake, a boat isn’t a necessity: a majority of the 2,000 waterfowlers lucky enough to draw a tag pass-shoot swans from the hundreds of miles of dikes that control the water levels of the surrounding marshes. Yamane and I are hoping to decoy our bird, so we line the slushy hole with a dozen oversize plastic swans. Replicating the swan’s distinctive sound is more important than the dekes, but even that doesn’t require a species-specific tool. Yamane, like most swan hunters, calls the birds with his mouth, whooping and hooting. I give it a try but immediately feel foolish. I decide to save my hooting and hollering for when—if—I pull the trigger.

I remember the first time I saw a swan mount, in my local taxidermist’s shop. The bird was reared back, with its wings spread, and its long neck extended, stately and royal. Though impressive, the mount was a little surreal. Aren’t tundra swans protected? As it turns out, huntable populations range across the U.S., but only six states offer tags for them. Once I discovered tundra swans were fair game, I became obsessed with hunting them.

In Utah, before you can even apply for a swan license, the state requires that you complete an online course on how to differentiate between the tundra swan and the federally protected trumpeter swan. When I first applied, in 2012, friends assured me that it would take only a year to draw a tag. In the past few years, swan hunting has become so popular in Utah, though, that getting drawn now calls for up to three preference points.

No Big Whoop
As Yamane and I wait out the afternoon, we spot few swans other than seven or eight flocks flickering over the middle of the lake. Eventually, two or three groups pass nearby, and we hear a shotgun report as a flock flies near another hunter braving the subzero temperatures. We can’t see him, but we hear his celebratory shout when a bird thuds onto the ice. I can’t help but feel a little jealous.

An hour later, we hear swan whoops just above the rushes behind us. Yamane motions me down into the blind, then answers the birds’ calls. They continue the conversation until Yamane coaxes them over the blind, nearly within range. My insides coil like a spring. But the cue to shoot never comes, and the swans fly on.

Before I can even ask, Yamane explains: “Too many juvies. Didn’t want to chance it.” Young tundra swans still wear the gray plumage of a poult, and though legal to shoot, they aren’t as prized as the white-feathered adults. I keep to myself that I’d deem any swan a trophy at this point, but I’m sure my curt “O.K.” gets the point across.

Brace for Impact
As the afternoon turns colder and darker, I replay the flyover in my head, fearing that we’ve missed our only chance at a swan. Yamane acts confident, but I can tell that he’s as surprised as I am when a call floats in overhead. Visibility has dropped to a quarter mile, maybe less. Swans are out there, but I can’t tell where. Yamane gives a whoop, and a bird responds. Now the flock is even closer. White spots appear in the gray fog. Seven adults pass overhead and circle just outside the spread, but then, like the previous group, pump their wings and retreat.

One more opportunity gone—and with so little time left in the day, I doubt there’ll be another.

Then a single bird breaks from the flock and circles back. My fingers tighten around the shotgun. The swan, bright and mature, locks its wings and glides over the open water. Though it seems impossible to whiff on such a big target, missing is all I can think of. The swan lowers its black landing gear, and as I stand, I can no longer feel the aching cold in my feet. I cover the bird’s head with my shotgun barrel and squeeze the trigger. The bird crumples and somersaults into the slush with a cannonball’s splash.

Finally, it’s my turn to whoop.