The days are short as the season comes to a close, but it's still worth going out for one more hunt 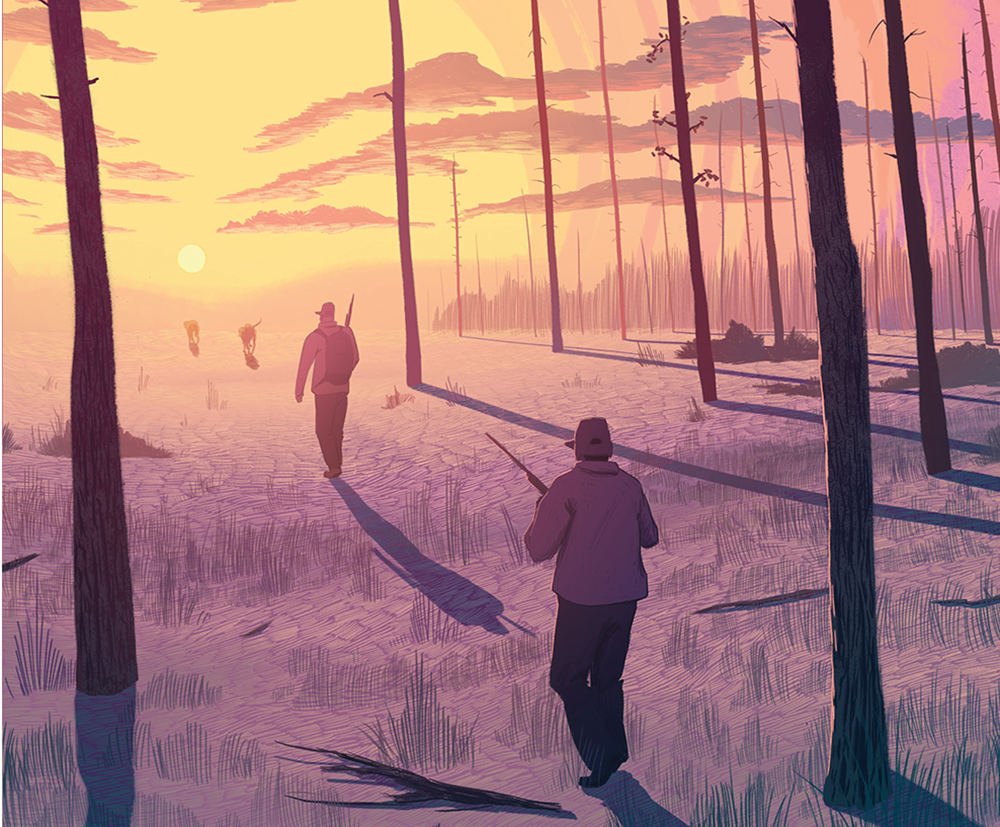 Getting in one last hunt makes the months between hunting seasons a little easier. Michael Marsicano
SHARE

It’s late-afternoon light, melancholy and gold in the tops of the shortleaf pines, but it leaves the creekbottoms in moody shadow. It’s the kind of light that lets you know the hunt is just about over. My arms are tired from carrying the gun, my face is windburned, and my legs are worn out from a million high steps through a million black­jack oak tangles. We could have quit an hour ago, but my buddy George Dixon and I know what quitting means. This deep into the season, this far into February, stopping might not mean just calling it a day. It might mean the end of it all—the last hunt of a season that reaches back nearly half a year. Back through birds and ducks and deer and geese, all the way back to September doves when it all started and never stopped.

The dogs feel the end of the day just as keenly, but theirs is a different response. While Dixon and I dawdle every chance we get, catching our breath, resting our knees, they’re ranging farther than ever, hunting harder, sensing the time tick away. We call them in, time and again, but they push the limits, knowing there’s little time to waste. The big pointer, Smokey, courses through fire-blackened pines. Boy, a setter, quarters through curtains of river cane, throwing caution to the wind. The falling sun only sharpens their senses and heightens the urgency. They pant with a cadence any hunter can interpret: Where are the birds, where are the birds, where are the birds?

That’s when the quail explode beneath my feet, whirring wings and frantic black-hooded heads flung from some subterranean wormhole. It’s a tattered late-winter bobwhite covey—seven, maybe eight birds at most—overrun by the dogs, and when they flush one is so close I feel wind from its wings brush my cheek. The first shot is wide of the moon, but I check my nerves, find a single quail streaking on the edge of the pack, and string it together: butt, belly, beak, bang. Another miss.

I shake my head in disappointment. “Now don’t get all whiny,” Dixon says. I’d been on a streak over the past two coveys. “You’ve had a pretty good run these last few hours.”

Which is the point. I don’t mind being bested by birds, but I want to go out on a high note. Today, more than most, I want to sink the last shot.

We’re gnawing the bones these days, scratching out a last few hunts in the seasons that remain open. It’s mostly a small-game gig this time of year, and nothing comes easy. Rabbits are run ragged. Squirrels are loath to risk a daytime stroll along leafless branches. Left in the woods are the quick and the crafty. Still, this is one of my favorite times to hunt. Late winter lays bare the woods’ secrets. More than a few times I’ve cut a deer hunter’s half-hidden trail while stalking a squirrel cutting nuts, and followed wisps of surveyor’s tape to oak stands I never knew existed. I’ve watched mallards bomb into overlooked pocket swamps. I don’t forget such honey holes. I’m likely to sketch a tiny map on the back of a wadded-up biscuit receipt. I’ll be back.

I hadn’t hunted quail in years when I picked it back up the season before last. I fell in with a crowd of wild-quail enthusiasts who pour heart and soul into managing their land for bobwhite quail. The hunting isn’t easy. You can pretty much forget about classic open-field points. Twenty-first-century bobwhite quail have adapted along with everything else, and they’re more likely to inhabit a nasty half-grown clear-cut than a cornfield border. Dixon and I spent much of our morning plowing through briery hedgerows and pushing through brush to get reluctant bobs to use their wings instead of their legs, and the afternoon has settled into a bit of a lull. But it ain’t over till it’s over, and there’s nothing like a bird dog to remind you of that.

We’re heading back to the truck, the sun slipping fast, when Smokey locks up. Dixon and I give each other a nod and move in, throwing elongated man-­shadows on the ground as we close the distance. For a moment I wonder if those spectral shapes might unsettle the birds, and in the next moment the covey flies.

Dixon is first on the draw. He downs a bird with his bottom barrel as I swing and fire with my own, a puffball of feathers signaling a hit. My second shot is not so lucky. The rest of the covey scatters like confetti, singles strafing above the broom sedge and bluestem.

After the retrieves, we whistle in the dogs. “No bird, no bird,” we call. “Let ’em go.” It’s too late in the season to hunt down loners. The nights are cold and long, and during the morning’s frigid hours it might take until lunchtime for a bobwhite to find a breakfast’s worth of seed. We leave the birds to roost up and gather their strength. Dixon and I turn back to the truck, a half-mile away. There’s not a ray of sun left in the treetops when we pass an old tenant house moldering in the pinewoods. Its day, like ours, is done.