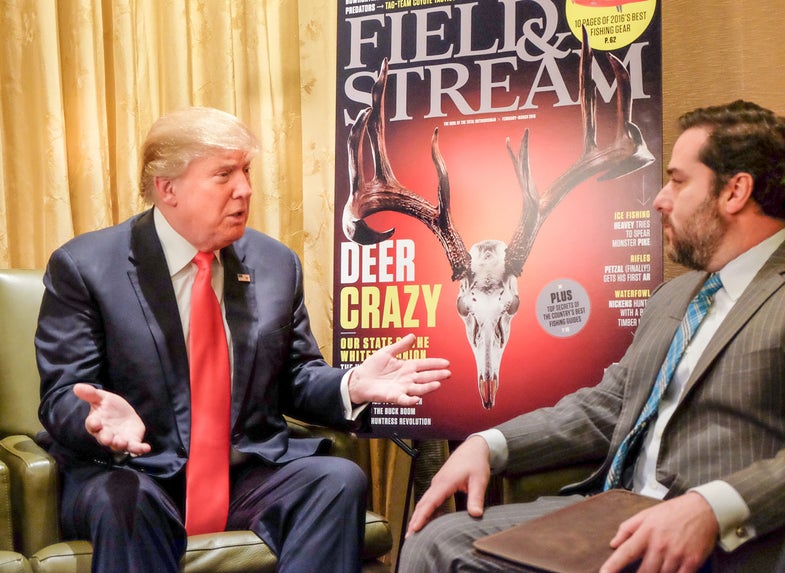 On the third evening of the Shooting, Hunting, and Outdoor Trade Show, editorial director of Field & Stream and Outdoor Life, Anthony Licata, interviewed Donald Trump on issues important to sportsmen and women. Trump came to the interview, on the 36th floor of the Venetian hotel in Las Vegas, with his son Donald Trump Jr., who is an avid hunter and shooter.

Here’s the Republican presidential candidate’s take on President Obama’s recent executive orders on firearms, the privatization of federal lands, Hillary Clinton, and hunting with his sons.

Anthony Licata: Thank you very much for agreeing to meet with Field & Stream and Outdoor Life to talk about…

AL: Thank you very much. I guess the first thing I’d like to ask is, are you a gun owner, a hunter? The two of you?

DT: I do have a gun, and I have a concealed-carry permit, actually, which is a very hard thing to get in New York. And, of course, the problem is once you get to the border line of New Jersey or anyplace else, you can’t do it, which is ridiculous, because I’m a very big Second Amendment person. But I do have a gun, and my sons are major hunters, and I’m a member of the NRA.

AL: Do you hunt with your sons? How did they get into the sports?

DT: I don’t like the idea because I want to keep the lands great, and you don’t know what the state is going to do. I mean, are they going to sell if they get into a little bit of trouble? And I don’t think it’s something that should be sold. We have to be great stewards of this land. This is magnificent land. And we have to be great stewards of this land. And the hunters do such a great job—I mean, the hunters and the fishermen and all of the different people that use that land. So I’ve been hearing more and more about that. And it’s just like the erosion of the Second Amendment. I mean, every day you hear Hillary Clinton wants to essentially wipe out the Second Amendment. We have to protect the Second Amendment, and we have to protect our lands.

AL: If you were elected President, would you reverse the executive orders that President Obama announced on guns recently?

DT: Yes, I would do it. I think it’s ridiculous. I think, number one, if you are going to do anything—and I don’t think you should do anything, because we have enough rules and balances and checks—you have to go through Congress. You can’t just write an executive order and sign it. You’re supposed to talk to the congressmen who represent a lot of your readers, and, you know, they have to sort of say “Let’s do this” or “Let’s do that.” You don’t do an executive order. But I’m for doing nothing. You know, it’s a mental-health problem, right? And the guns aren’t pulling the triggers, okay. It’s the people that are pulling the triggers. We have a big mental-health problem. And they’re closing up all of the hospitals, all of the institutions, and that’s our problem. And so I would absolutely reverse many of his executive orders beyond this, many of his executive orders.

AL: Let me ask you this—back to conservation and access for hunters’ rights to get on public land. One of the things that we’ve found is so much of this campaign—not your campaign, but this election cycle—has talked about cutting budgets and reducing the federal government. And what the budget is for managing public lands right now is at one percent. In 1970, it was two percent. Would you continue to push that number down for wildlife conservation or would you look to invest more?

DT: I don’t think there’s any reason to. And I will say—and I’ve heard this from many of my friends who are really avid hunters and I’ve heard it from my sons who are avid hunters—that the lands are not maintained the way they were by any stretch of the imagination. And we’re going to get that changed; we’re going to reverse that. And the good thing is, I’m in a family where I have—I mean, I’m a member of the NRA, but I have two longtime members of the NRA. They’ve been hunting from the time they were five years old and probably maybe even less than that. And they really understand it. And I like the fact that, you know, I can sort of use them in terms of—they know so much about every single element about every question that you’re asking. And one of the things they’ve complained about for years is how badly the federal lands are maintained, so we’ll get that changed.

Donald Trump Jr.: It’s really all about access. I mean, I feel like the side that’s the anti-hunting crowd, they’re trying to eliminate that access—make it that much more difficult for people to get the next generation in. For me, hunting and fishing kept me out of so much other trouble I would’ve gotten into throughout my life. It’s just so important to be able to maintain that, so that next generation gets into it. And it’s the typical liberal death by a thousand cuts: “We’ll make it a little harder here. Make it a little harder here. We won’t spend the money there.” And it’s not just about hunting—it’s about fishing; it’s about hiking; it’s about access; it’s about being able to get in there and enjoy the outdoors and enjoy those great traditions that are so, you know, so much the foundation of America. And we’d be against anything like that. And frankly, it’d be about refunding those—making sure those lands are maintained properly; making sure they’re not going into private hands to be effectively walled off to the general public. And that’s something really important to us.

DT: Well, I’m very much into energy, and I’m very much into fracking and drilling, and we never want to be hostage again to OPEC and go back to where we were. And right now, we’re at a very interesting point because right now there’s so much energy. And I’ve always said it—there’s so much energy. And new technology has found that. And maybe that’s an advantage and maybe—actually, it’s more of an advantage in terms of your question, because we don’t have to do the kind of drilling that we did. But I am for energy exploration, as long as we don’t do anything to damage the land. And right now we don’t need too much; there’s a lot of energy.

AL: Time for one more?

AL: If you’re elected, will you go hunting as President with your son?

DT: I would do that. With my both sons, I would do that. And I feel very good with them. And, you know, I’m in New York City, so I have a concealed-carry permit, and I meant to tell you—I just wanted to point that out because it’s so hard to get, and it’s one of the hardest things you can get. And very hard. And as far as going hunting with my boys, that would be something that I’d love to do. I’ve done it before, but I’d love to do it.

AL [to Donald Trump Jr.]: Where would you take him?

DTJ: I would come up with something good. I mean, I think we’d keep it to the upland-type birds. You know, that’s how I’ve introduced anyone that I’ve ever introduced to hunting. And I’ve taken some of these people that are city people, and just take them on a walk-up—go shoot some clays, and then take them on a walk-up. And not one of those people has ever turned to me and [not] said, “You know, that was one the greatest weekends I’ve ever had in my life.” You just need to get people into it. You need to be a mentor. And that’s what we need more of in this industry: mentors. To get rid of, you know, some of the difficulties, the barriers of entry, which are a little bit intimidating at times. So being able to create that, open up those doors, create some new hunters, and bring the next generation of hunters into the game.

DT: You see what I mean.

DT: Thank you very much.

AL: Thank you very much.