Ultrarealistic decoys and new tactics are helping bowhunters bag more toms than ever. Here’s how to get in on the action. 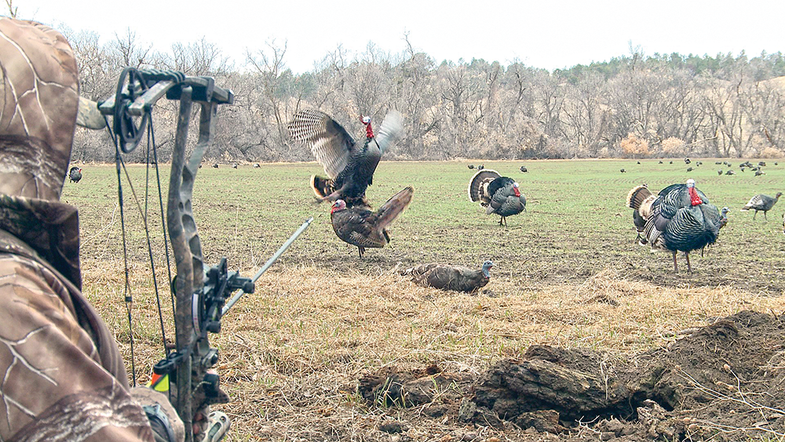 The early season is the best time to bowhunt turkeys. Winter flocks are breaking up, and individuals are establishing spring pecking orders. Groups of three to six gobblers often run together for a week or two immediately following the winter breakup, and they spend their days fighting or violating whatever other turkeys they may encounter—including the fake ones in your spread. These are the birds that’ll sprint across 300 yards of pasture to attack your strutter decoy. That’s exactly the attitude a run-and-gun bowhunter needs.

Though gobbler groups may range wide in their daily quest for violence, they’re vocal and usually easy to find. It’s easiest to locate them on the roost, but you can expect a garbled mess of shock gobbles at about any time of day, so stay on the move until you strike them.

After getting them to gobble, a shotgun hunter would look for a way to get closer and set up. But a bowhunter’s approach is more reserved. Cally Morris, who owns Hazel Creek, has more than 50 bow-killed turkeys to his credit and has guided and filmed countless more. If he’s within 200 yards of a gobbling gang, he’ll often back up 75 yards.

“Gobbler gangs can come in too fast if you’re bowhunting,” he says. “It takes some time to set up for a bow shot, and the woods are really open in early spring. It’s best to leave yourself plenty of room, set up perfectly, and then depend on aggressive calling to get them where you need them. If they’re in the mood, they’ll come in.”

As for the setup, first choose a good piece of cover, like a root wad, brush­pile, or even the trunk of a large tree, and position yourself so it’s between you and the turkeys. Sit flat on your rear with your bow-arm shoulder against that cover. The decoys should be no more than 15 yards in front of you. Leave at least 3 feet of space between each decoy, to give the gobblers room to strut between them. You need a clear shot to all of them—but the cupcake should be at the strutter, since that’s where 75 percent of incoming gobblers will head first.

You need to figure all this out quickly, of course. And then start calling. “You can power-call the hell out of a gobbler flock in the early season,” Morris says. “Loud, long yelps, cutts, and fighting purrs…so long as they’re responding, stay on them.”

Chances are a gobbler group will walk in and immediately start circling your strutter. Give them a minute or two to settle in and even flog the decoy—while you are picking out the bird you want to shoot. Ignore the others. As soon as your bird turns his fan to you, draw your bow. On the off chance his companions putt, it’ll take your bird a few seconds to drop strut and catch up. You have plenty of time to settle your pin and take the shot.

A $20 foam decoy might stall a tom long enough to shoot him with a gun, but it probably won’t cut it for bowhunting. In order to draw, you need a gobbler to become mesmerized by your decoys. The best I’ve used are custom taxidermied decoys from Hazel Creek ­(hazel​creek​inc.com). They’re an investment, starting at $795 for a hen. I can’t afford a spread of them, so I use Avian-X decoys ($80 for a hen; ­avian-x.​com) most of the time. Molded-­plastic Dave Smith Decoys ­(starting at $120 for a hen; dave​smith​­decoys.com), are also popular with
serious bowhunters.