The top new pots, diaphragms, and push-buttons for this season. 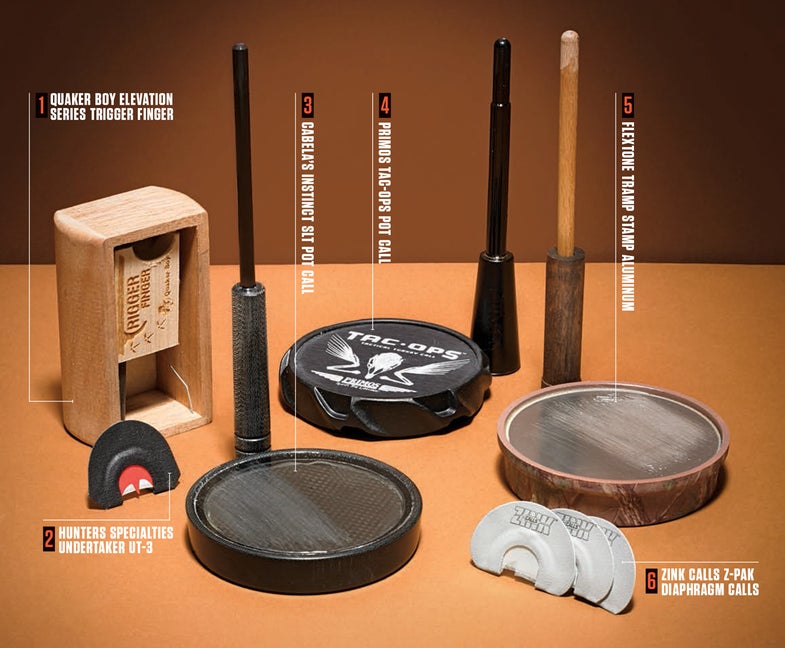 As has been the case since I killed my first longbeard in 1990, March sees my United Parcel and FedEx drivers delivering little brown boxes filled with the latest and (sometimes) greatest turkey calls of the year to the front door. These six are the best new calls for 2016.

1. Quaker Boy has given me incentive to pack a push-button in my vest this year with the Trigger Finger, which eliminates the push rod outside the call frame. That means there’s almost no chance of emitting unintentional yelps and squawks while you’re walking. It’s made of mahogany, so sounds are soft, smooth, and natural, with just a hint of high-end for volume. Clucks, purrs, and yelps come easy. Today’s hard-hunted gobblers don’t hear a push-button often, and that distinctive sound can sometimes make all the difference in a longbeard’s tiny brain. $40; quakerboy.com

2. Gobblers seem to go gaga over the midrange raspy nastiness of a batwing-style diaphragm call, and you don’t need to be a competition-caliber caller to run one. The Undertaker Series UT-3—black tape, flexible aluminum frame, and three thin hand-stretched latex reeds—didn’t disappoint. If you like raucous calls, you’ll like the UT-3. $13; ­hunter​spec.com

3. New to the Cabela’s SLT (Second Language Turkey) line, the Instinct Pot Call is an all-black friction rig with an unusual Micarta (high-pressure formed laminate) pot. This ultrahard pot is mated to a crystal surface and carbon soundboard. Played with the solid carbon striker, it is flat shrill—great for high winds or long distance. Condition it well, though, and perhaps experiment with a softer rosewood or hickory stick. $150; cabelas.com

4. I’m always curious to see what interesting names Primos will assign its new turkey calls (Bamboozled, Purple Haze, and Lil’ Hot Box are favorites), and 2016 brings us the Tac-Ops Pot Call. The anodized-aluminum calling surface is set in a black-and-white marbled, grooved synthetic pot that’s comfortable to hold, and the shape helps you position the call correctly. A synthetic all-weather stick means rain is not a problem. Scratch it up hard with something tough, such as a conditioning stone, and the Tac-Ops delivers great turkey sounds. $25; primos.com

5. The folks at Flextone have a winner here with the Tramp Stamp pot, the name notwithstanding. No skulls or neon colors—just an aircraft-aluminum calling surface in a synthetic Realtree Xtra-Green pot. Though it’s a little thick for my tastes, the hickory striker does feel good in the hand and sounds super on the call. As with all metal calls, the Tramp Stamp requires a bit of roughing up with a hard stone prior to use. $22; flextonegamecalls.com

6. Calling legend Fred Zink made his reputation crafting some of the finest goose calls on the planet. For several years now, he’s been trying his hand—quite successfully—at turkey calls, and he’s hit a home run with the new Z-Pak. This trio of reeds includes a split double, a cutting-style triple, and my favorite, a nasty-raspy combo-cut double. Zink’s calls have always been no-nonsense, and his turkey line is no exception. $20; zinkcalls.com