At only 18 years old, Hunter Wallis is well on his way to becoming the best turkey caller in the world with a mouth diaphragm. Check out his tips for improving your own game this spring 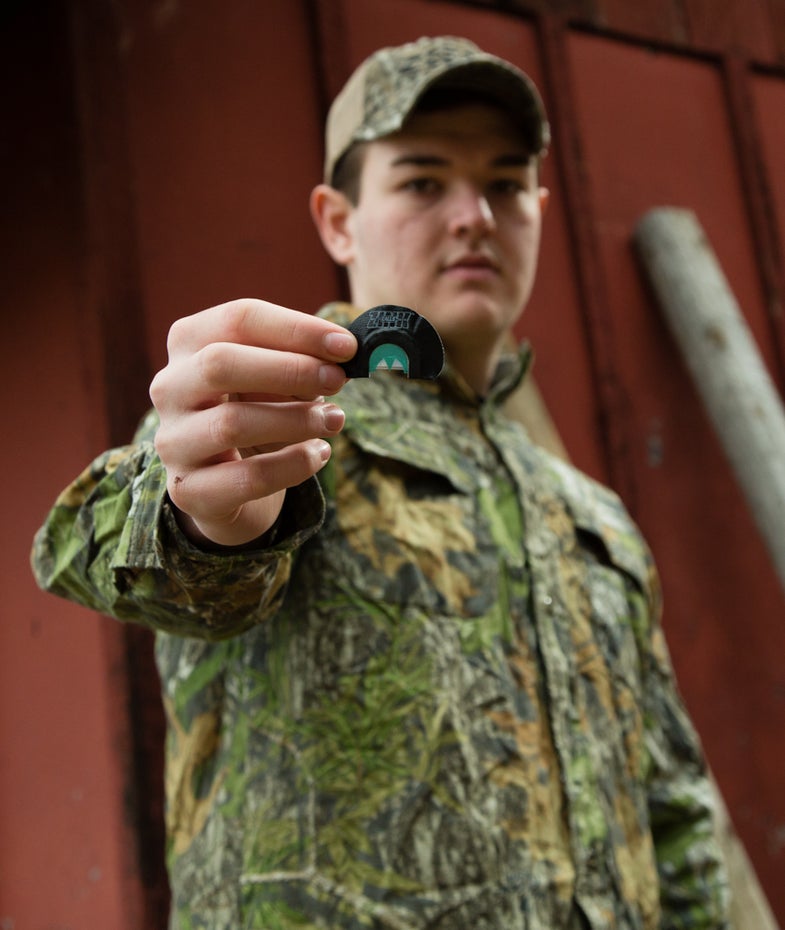 Hunter Wallis knows a little something about turkey calling. At only 18 years old, he’s a six-time National Wild Turkey Federation Grand National champion, the highest honor in competitive turkey calling. For the last 10 years, he’s been cleaning up on the circuit and in the turkey woods.

Every inch of wall space at his family turkey camp in northeast Pennsylvania is plastered with an award plaque, a newspaper clipping, a magazine cover, or a photograph. Every shelf holds a trophy. On top of an old piano: a chain of turkey spurs long enough to hang a tree swing.

Jeff Wallis, Hunter’s dad, remembers the exact moment he knew Hunter was on to something special.

“When Hunter was very small, 5 years old, the Cabela’s in Hamburg first opened. The trip was two-hour drive, and I found a small-frame diaphragm call,” Jeff said. “He put it in his mouth, I told him not to swallow it, and in the course of that trip home, he mastered that mouth call. By the end of that trip he made almost perfect yelps. It takes a lot more practice now, on his level, but that was the basis of the calls he does today.” 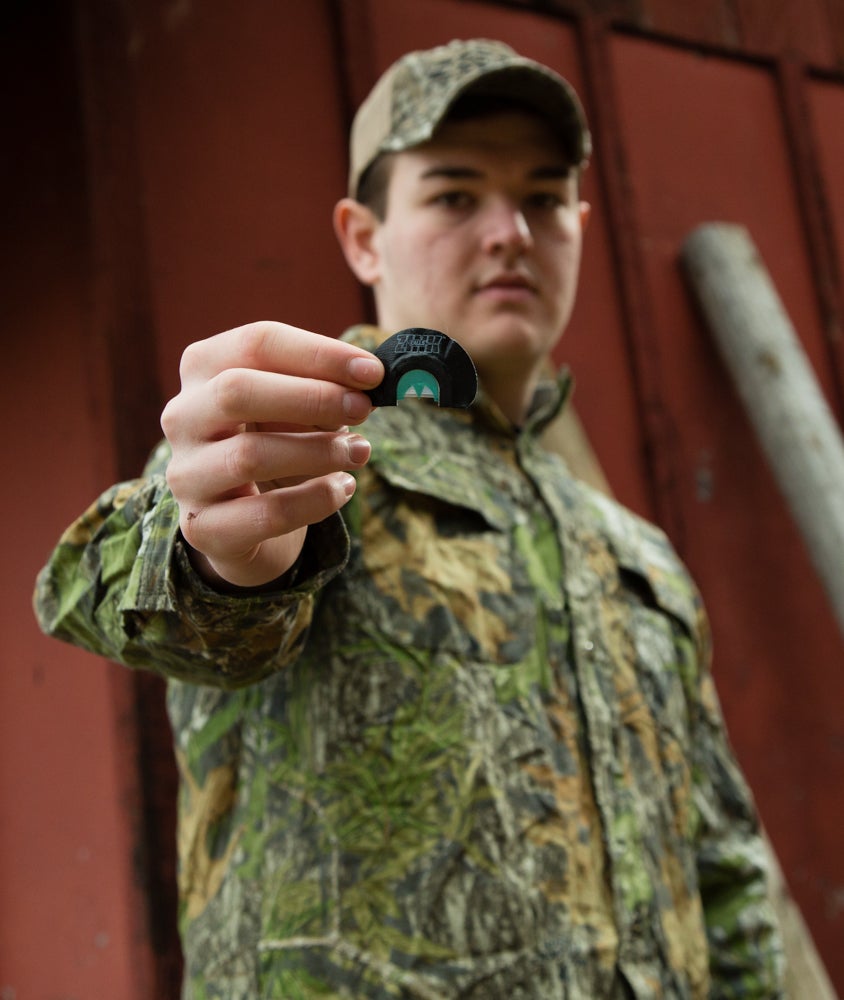 Hunter Wallis with his signature series call. Check out Hunter’s video tips on:

How to Purr with a Mouth Call

How to Cutt on a Mouth Call

“Understanding Hunter’s success is very simple,” said Chris Piltz, Special Events Coordinator with the NWTF. “He mastered the mouth call at such an early age, long before anyone else in his age division. He’s had a run of recent dominance that cannot be touched.”

Dakota Clouser, also of Pennsylvania, stacked seven consecutive Grand National wins in his youth and intermediate career. Hunter could tie that next year, and then have one more year take the all-time wins crown. Does he feel the pressure?

“It’s like a football game for an NFL player. I’m ready to go, but I’m nervous at the same time,” he said. “I can use that energy on stage.”

The real anxiety doesn’t come before a contest, or in thinking about the future, but in those final minutes after he’s on stage, before the winners are announced. That’s when he’s standing before the crowd, looking at his sneakers, fiddling with his hat, and waiting to hear his name. And usually he has to wait the longest, until the biggest trophy is handed out.

Running a mouth call at Hunter’s level is a lot like singing. Some people have the raw ability, and others just don’t. Shape of the face plays a part in it. But talent alone won’t bring home a Grammy. It takes air control, mastering volume and pitch and tone. It takes studying live birds and past great callers. Above all, it takes practice. “One thing you learn in turkey calling is you can never be too good,” Hunter said.

Josh Grossenbacher, the 2015 World Turkey Calling Champion and call builder for Zink Calls, met Hunter six years ago at the Grand Nationals. “Hunter just took to him, and followed him all over the show,” Jeff said. Josh was invited to hunt with the Wallis crew that spring in Pennsylvania and New York, and they’ve hunted together ever since. Josh has since become something of a mentor.

“Hunter has the talent, but more importantly, he has the drive,” Josh said. “He’s never complacent. He’s always listening to older callers, trying new things. He’s constantly working, and that shows up there on the stage.”

Is Josh worried about Hunter in two years time, when he’s competing in the senior division, and against his mentor?

“He will be one of the guys filling a top-12 spot, consistently, that’s a given. But I’m not real nervous about him, because I build his calls,” he laughed.

Being a great caller and a great hunter are two different things. But if you master the mouth call, no turkey sound is off limits, from basic yelps and purrs to fly-down cackles and kee-kee runs. To master it, you must find a call that fits your palate and pipes.

One summer, Hunter was at Zink’s factory in Ohio, and Josh helped him tinker with different styles of calls. “We landed on a heavier latex call, triple reed, batwing, that requires more air pressure than a lot of other calls,” Josh said. “We sat around and messed with a lot of different latex and cuts before finding this combination.” 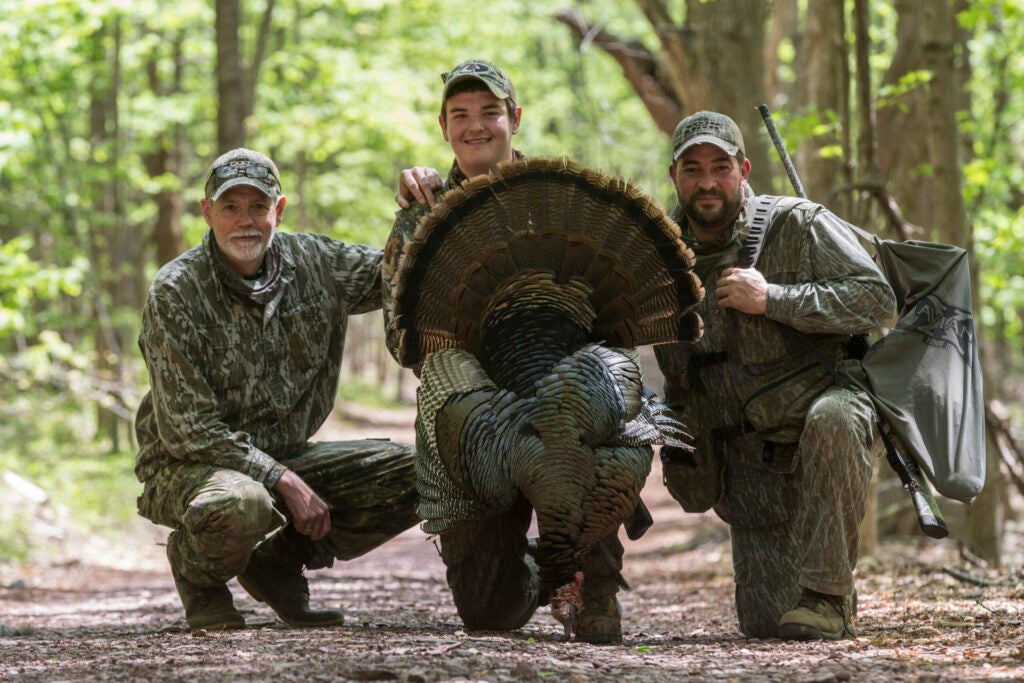 Hunter with his dad, Jeff Wallis (left), world-champion caller Josh Grossenbacher (right), and a big old gobbler (there in the center).

This spring Hunter will chase birds in Alabama, Indiana, Pennsylvania, New York, and maybe Ontario. “When it comes to strategy, woodsmanship, he’s like a seasoned vet,” Josh said. “I’ve hunted with hundreds of people over the years, and he knows more about what’s going on that 95 percent of the guys I’ve been in the woods with.”

Between calling contests, the turkey woods, high-school baseball—a team with regional championship potential this year—and all the other demands of 18-year-old life, Hunter is also one busy dude. “Summer break is nice,” he said. “I usually sleep for about two weeks, but then I like to go down to Zink’s and work on some new calls.”