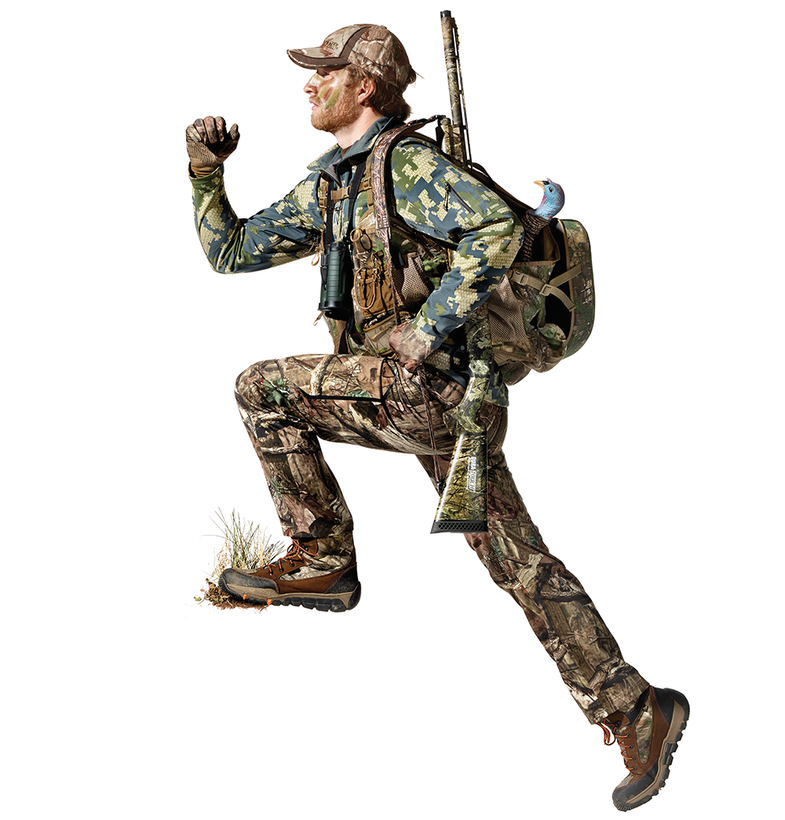 Eric Brock has spent a lifetime hunting gobblers in the Appalachian Mountains of Kentucky, Tennessee, Virginia, and West Virginia. “Mountain gobblers are all I know,” he says. “And our motto is, if he gobbles, he dies.”

The terrain here is notoriously steep and rugged, with hollows, secondary ridges, and abandoned strip mines scattered throughout. There are plenty of turkeys to hunt—if you’re man enough to get to them.

“Normally we park in a valley, so if a bird gobbles on the left mountain or the right mountain, we can go to him,” Brock says. “Plus, it’s nice to have a downhill walk back to the truck. But that means you always have a steep climb ahead of you first thing in the morning.”

If a bird gobbles, Brock goes to him. It doesn’t matter if that bird is atop the next mountain over. Being in top physical shape is an absolute requirement. “You’ve got to work off that deer-stand fat before spring,” he says. “Lots of things can go wrong and keep you from killing a turkey, but you never want physical limitations to be one of them.”

Henned-up toms frequently roost at lower elevations and pitch down into the hollows. But Brock says subordinate birds—or lone, late-season birds just looking for love—usually roost higher and gobble more often. Either way, the trick to killing one is to get on his level or above him. The faster you can do that without spooking the bird, the better your odds.

“A good setup is the key to killing a mountain turkey,” he says. “Often as not, you just spook turkeys trying to set decoys in this country. Instead, we use breaks in the terrain—and there are plenty of them—so that when your tom appears, he’s in gun range. But you can’t sit too close to a break, or he’ll slip in on you and spook at 5 yards before you can ever get a shot.

“The ideal setup is to position yourself on the edge of a little flat or logging road and call him out onto that. But you have to take what you’re given. There’ve been times when I’ve had to dig my heels in to keep from sliding down the side of a mountain while I was working a turkey, ­because that was the only place I could sit and have a reasonable chance of killing him.”

Photograph by The Voorhes