Use a brushpile to hide you from a gobbler’s view until the final seconds. 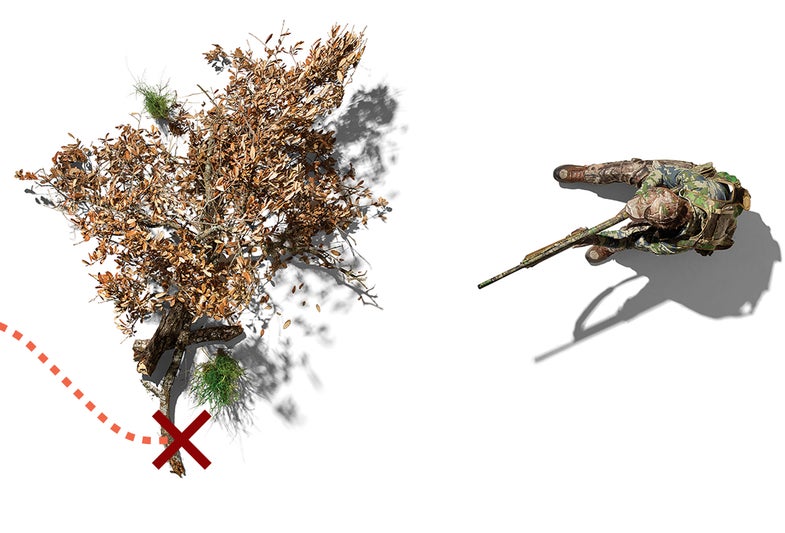 With unfilled tags on the line, the best turkey hunters break out their most aggressive tactics.

Back when George Mayfield was a turkey guide, hunting was all about 2-year-old gobblers and high success rates. Mayfield is retired now, and for fun, he likes to duel with older turkeys. “If there’s a bird bad enough to earn a nickname,” he says, “I’m all over him.”

The key to killing a bad old bird like this is to learn everything you can about his strut zone—and then don’t crowd it, says Mayfield. “An old gobbler isn’t coming to a call so much as he’s coming to a spot where a hen can see him putting on a show. Many hunters mess up by finding a strut zone and then setting up right in it.”

Mayfield likes to get a gobbler going from the strut zone, but then he changes his point of attack once he believes the tom is on its way. Rather than sitting right there, he backs off, preferably to the uphill side, and sits just within gun range. And instead of a decoy, he keeps some sort of obstacle, like a blowdown or brushpile, between himself and the strut zone. When the bird walks past that obstacle and into view, Mayfield kills him.

“I shoot 80 percent of my gobblers in the side or back of the head,” he says. “That’s because I’ve set up to shoot at the spot a turkey wants to be, rather than trying to call him into my lap.”

Photograph by The Voorhes