The Magic of Cooking in a Dutch Oven

When you cook wild game inside a Dutch oven, it’s seasoned with the memories of past hunts. 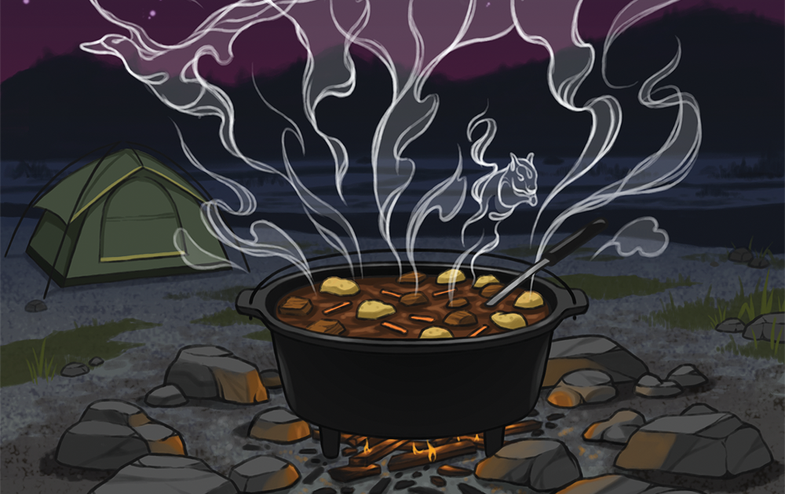 The kid was 8 years old, a Cajun boy from the Louisiana big woods, and he was killing me at blackjack. It was past 10 p.m., and we had been hard at it since well before dawn, chasing squirrels so far back in the swamps that we had to be on the ATVs an hour before sunrise. I was deep into my cash and ready to fold for good, but my concerns did not amount to a puddle of tears. An hour earlier my hosts had capped a 12-quart black pot with its battered iron lid and slid a half dozen squirrels into the oven.

“This is what we call puttin’ it on drink, Mr. Eddie,” they said. Beer tabs popped like somebody was two-stepping on Bubble Wrap. “Ain’t no hurry. Now we jus’ enjoy ourselves.”

In other words, supper would be ready when it was ready. You can’t rush black magic. My freckle-faced adversary grinned across the table and shuffled the deck. I pulled out my thinning wallet. For the time being, the Dutch oven held all the cards.

That raucous, late Louisiana night was hardly my first brush with a Dutch oven, but it was the one that kicked off an obsession. When those squirrels came out of that black pot—seared in bacon grease, simmered in their own rendered fat, and braised alongside the Cajun holy trinity of onion, green pepper, and celery—everyone in camp dropped what they were doing and vanished to the kitchen, as if they’d been raptured to the dinner table. The scene, not to mention a belly full of bayou squirrels, sparked in me an intense love of filling a Dutch oven with wild game and then marveling at the result.

Layers of Flavor
It’s easy to get worked up over the magic and alchemy of a Dutch oven, and I’m as guilty as anyone. It’s really not all that mysterious: Cast iron is slightly porous, so preventing the metal from rusting and keeping food from sticking to that grainy surface requires slicking it with a tough, nonstick covering—what cast-iron aficionados refer to simply as the seasoning or patina. It’s nothing more than oil smeared on the metal and baked in temperatures hot enough to polymerize the fat. The molecules rearrange themselves in the high heat to form a hard, lacquerlike layer.

Once that base layer is down, something truly marvelous happens over time. A Dutch oven’s seasoning improves the more you use the pot. It blackens and slickens and thickens with near microscopic layers—bacon fried for an ­opening-​day breakfast, doves seared in butter, cubes of venison shoulder browned for stew, fish fried with potatoes and onion. Each meal takes from every previous meal a bit of its character and flavor. And it passes on its own DNA to infuse the dishes to come. As long as the pot is cared for and fussed over just a little bit, tonight’s fried rabbit could sizzle on a surface whose foundation was laid in your grandmother’s kitchen.

It’s happening right now, in fact. A half hour ago, I seared three plucked Nebraska mallards in a stovetop beast as squat as a toadstool. Stirring the grease in the bottom of that black pot was like looking into a reflection of the past. Maybe it’s only in my mind, but I can taste a little bit of green-chili chicken from a favorite Florida Keys campsite each time I fry ham in the oven. There’s a hint of northern pike fried on spruce twigs when I bake French toast in the fire. Venison on the stove in a Cape Lookout fish camp. Fresh-picked blackberry cobbler baking under a halo of oak coals. Jack’s Mountain Man breakfast on a Virginia river sandbar—he cooked it all by himself and wasn’t yet 10 years old.

After my black-pot epiphany on the bayou, I laid in a pretty good store of Dutch ovens: a couple on spider legs so I could set them on coals; others good for oven and stovetop use; even a pair of lightweight aluminum Dutch ovens that some consider blasphemous, but then they’re not the ones who portaged them across a mile of Ontario granite. But I still play favorites. This banged-up old soldier with the bent bail handle was my first Dutch oven. It lives on top of the freezer, close at hand and ready for rapid deployment.

I slide the oven off the burner and add cut-up onions, green peppers, summer sausage, garlic, and Cajun spices. Then comes an oddball pair of secret ingredients: half a can of Coke and a one-​­second squeeze of pancake syrup on top of each bird. Over the next three hours, at 300 degrees, something beyond my understanding takes place inside that black cauldron. The duck fat, cheap syrup, seasoning, and cola mingle into an amber broth that tastes as though you’d liquefied marsh grass, whistling wings, and gas-station honey buns and poured a duck-blind sunrise over rice.

But not for a while. The lid goes on with the same soft clank that’s meant the same thing over the centuries, in fur trapper’s cabins and cattle driver’s camps and deer woods across the country: Dinner’s coming, but in its own sweet time. I slide the Dutch oven into the heat, and put it on drink.

TIP OF THE MONTH: Dutch-Oven Math