Make a hen move to get a wary gobbler into gun range. 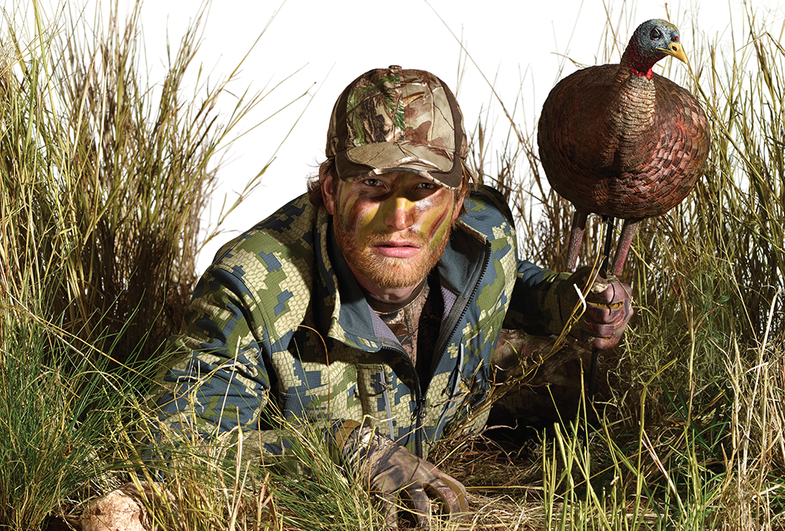 Creeping toward a gobbler behind a strutter decoy or a dried fan is all the rage these days. It can work wonders, but it can also scare the daylights out of a subordinate or pressured tom. Yet, the classic, subtle tactic of staking a hen decoy out in a field where a tom can see it from a distance frequently results in a hung-up bird that stands and struts at 80 yards. A motionless hen decoy simply looks fake, and without tripping that dominance trigger, not many gobblers will rush in to investigate. The simple solution is to make that hen move. Like adding a jerk string to a spread of duck decoys, it can make all the difference in getting a wary gobbler to fully commit to coming into easy gun range.

As with fanning, it’s ill-advised to crawl around with a hen decoy—or any decoy—in the woods, purely for safety reasons. Save this tactic for field birds, like the one my buddy killed a few years ago.

He’d missed the gobbler the day before and was shaking his head in defeat. We returned the next day, and he briefly spotted the tom through binoculars before it disappeared. Frustrated, he said, “Must’ve spooked him again.”

I took another look and saw a splash of red with black below it in a grown-up fencerow. The gobbler was standing in the cover. “That’s a fence post,” my buddy said. I grinned and disagreed, and told him to give me his hen decoy.

He set up in nearby edge cover while I crawled through high field grass with the decoy above me, moving it as if she were bugging. Although the gobbler was a football field’s length away, I kept the decoy high enough​—​and moving enough​—​that he could see it. Suddenly the “fence post” broke cover and sprinted toward us. Boom. Game over.

The trick is to hunt with a buddy and designate one of you as the shooter. Unlike fanning, in which you can actually crouch and hide behind the fan, the guy moving the decoy must stay flat on his belly, hidden in the grass, and remain mostly stationary. His only job is to move the decoy just enough to make it look alive. Don’t overdo it. Move the decoy along as if the hen were catching grasshoppers: head up, head down, ­turning occasionally, and sliding slowly through the grass. Add just enough calling to get the gobbler’s attention. Once he starts moving toward your position, simply stake the decoy into the ground and crawl back to your buddy so he can take the shot.

Photographs by The Voorhes