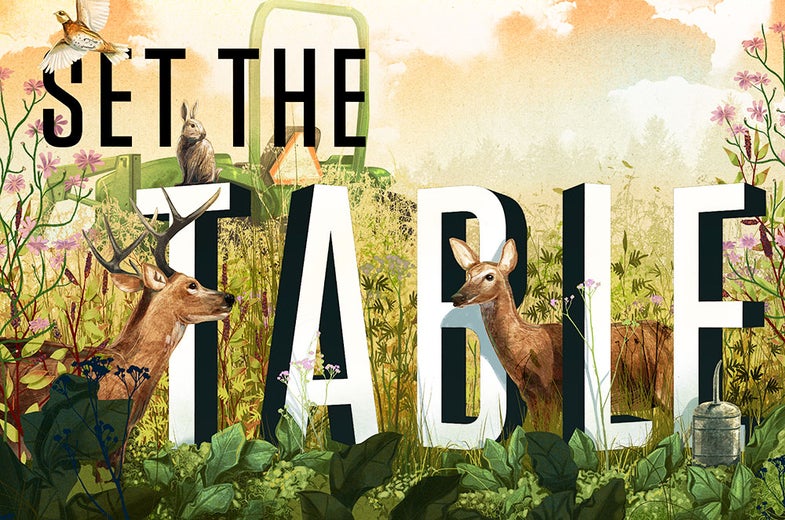 Dreams and reality are two words used often in habitat management. Your dream was a lush field where you’d see 20 deer a night and get a shot at a good buck. Your reality is a scratched-up hillside full of weeds and a cellphone photo of the giant nontypical that your neighbor shot while sitting atop a 5-gallon bucket, smoking a Pall Mall.

If holding big antlers is your only goal, food plotting isn’t the game for you because it’s fraught with expense and frustration. Save on the heartache by just paying an outfitter.

But if you don’t want to be at the mercy of others for consistent hunting—and you’re prepared for the setbacks—turning your ground into the place where area whitetails want to live is pretty danged satisfying. And it works. I’ve been playing on tractors and planting food plots in the name of better deer hunting since before I could legally drive. I’m a certified Level II Deer Steward by the Quality Deer Management Association. But there’s still plenty I don’t know. That’s why I’ve blended my advice with tips from two of the country’s top deer managers, all with the goal of helping you prep your property for the best hunting you’ve ever had—for this season and seasons to come.

1. For a Field of Fat Bulbs: Be a Brassica Miser

For broadcast planting of food plots, most hunters are aware of two recommended rates. One is the rate on the back of the bag, denoted in pounds per acre. The other is Pawpaw’s rate, denoted as “thicker’n hair on a dog’s back.”

When it comes to clover, chicory, and cereal grains, more seed doesn’t hurt. But oversowing is one of the most common reasons for brassica plot failure. “A healthy turnip will have a giant bulb and a leaf the size of your face,” says Erich Long. A plant of that size is going to suck up some nutrients. “When you plant too many brassica seeds, you get too many plants competing for limited nutrients. Instead of a field full of big turnips, you end up with a bunch of stunted, unpalatable plants. When you’re planting brassicas, you’ll get more forage from fewer seeds.”

It’s easy to oversow turnips because, like clover, the seeds aren’t much bigger than the period at the end of this sentence. If you’re sowing an acre of them at the recommended 5-pounds-per-acre rate, it won’t look like you’ve planted much of anything by the time you finish. But an empty seed hopper doesn’t lie. “When I’m sowing brassicas, I like to finish with a little seed even left over in the hopper,” Long says. “That way I know I didn’t overdo it.”

Table Manners: Use a Rangefinder

Like most hunters, I’m no good at estimating the acreage of my plots. But it’s crucial knowledge for properly applying seed, lime, and fertilizer. When in doubt, use a rangefinder to shoot the edges. A perfectly square 1-acre plot is about 70 yards by 70 yards (43,560 square feet)—bigger than many hunters realize.

2. For Long-Term Success: Burn it Down

The most critical year-round food source for deer is not acorns or food plots—it’s the browse growing in edge cover and in old fields. Old fields provide massive amounts of forage during their first few years of succession. That’s when they’re full of high-protein wild plants like blackberry, ragweed, pokeweed, old-field aster, and countless others—not to mention ample fawning cover. After a few years, saplings will overtake a field, and eventually, it’ll revert to a young forest.

One of the best things a deer manager can do for long-term herd health is maintain the early phase of that natural plant-life succession. Prescribed fire is an excellent tool for this. Burning in late summer and early fall usually produces a cool, slow fire with heavy smoke, as opposed to a winter or early-spring burn, which is typically hot and fast. Late summer seems to be the best time to kill woody vegetation with fire, likely because those plants are actively growing at that time.

Using fire as a management tool isn’t difficult, but it has obvious inherent risks. The burning laws vary from one state to the next. Good firebreaks and favorable burning conditions are the keys to a safe fire. “A mowed lane is not a firebreak,” Harper says. “I want to see bare dirt. In general, a 2- to 5-mph wind meets most objectives, and the relative humidity needs to be in the 30s. If it’s in the 40s, igniting the fire can be difficult. If it’s in the 20s, it’s too dry; that fire can get away from you quickly.”

“It’s better to plant strips of food and leave blocks of cover,” Harper says, “rather than leave strips of cover and plant blocks of food. That’s why disked firebreaks make excellent food plots.”

3. For the Sweetest Soil: Sample the Dirt

“Not testing your soil is lazy,” Harper says. “It’s why your food plots suck and mine don’t. For $6 or $10, you can know for sure exactly what nutrients your plots are lacking and adjust accordingly.”

Taking a soil test is as simple as getting a few shovels full of dirt from various areas of the plot, mixing it together in a zip-seal bag, and taking it to the nearest university ag extension office. Tell them what you’re trying to grow, pay a few bucks, and then wait a week for the results. These will look like a chemistry test, but don’t be intimidated. You need to know the soil pH and the recommendations for lime and fertilizer, which will be broken down by three key nutrients: nitrogen, phosphorus, and potassium (see sidebar at right).

Many soil tests recommend against adding nitrogen to legumes like clover and chicory, which are among the most popu-lar plot plants. “Legumes manufacture their own nitrogen if the seeds are inoculated,” Harper says. “But that inoculation can fail, and even if it doesn’t, those plots can benefit from a nitrogen topdressing. If at any time your plants look pale green, give them a shot of 30 pounds of nitrogen per acre. Think of it as fast food to provide as needed, while potassium and phosphorus are longer lasting.”

“Soil grows deer,” Long adds. “The better the soil, the healthier the plant, the better the palatability. Get the pH and the nutrient levels in your soil as close to the test recommendations as your budget allows. Test every few years, and you should see a big improvement over time.”

“Serious deer managers should be talking to farmers,” Long says. “Talk to the hay farmers about clover and alfalfa and the row-crop farmers about corn and beans. It’s priceless information that the average food-plotter doesn’t know. And most of the time, farmers will talk for free.”

Let’s say the soil-test results for your clover plot call for no nitrogen, 80 pounds of phosphorus (P2O5), 180 pounds of potassium (K2O), and 1 ton of lime per acre. Your plot is 1⁄2 acre, so you need 1,000 pounds of pelletized lime. But what about the fertilizer? The three numbers on the bag (which vary by blend) indicate the proportions, which tell you what you need. For example, per 100 pounds*:

Though nitrogen isn’t recommended for your legume plot, it won’t hurt anything. You’ll get 3 pounds per bag.

You need about three and a half bags of this mixture (as you get 12 pounds per bag) to get near the recommended application.

Those three and a half bags will give you 42 pounds of potash. Another bag and a half of potash (0-0-60) will top off the recommended potassium amount.

Some bottomland fields are too wet to sustain a food plot—so stop trying. You can mow those areas, but you’re not gaining much of anything by doing that. Provided the goal is more food, rather than cover (in which case you’d just allow the field to revert to young forest), disking is a good plan with near immediate results.

The finished product needn’t be a perfectly broken field, ready for a crop. Instead, you’re trying to disturb the soil enough to set back the existing vegetation, and give some new stuff in the seed bank a chance to germinate. Disking a hilltop field may not do much for you at such a dry time of year; but disking a bottomland field, where there’s sufficient moisture already in the ground, can spur the fast growth of tender new greens just in time for the bow opener.

“One of the best things you can do in fall is kill perennial, cool-season grasses like fescue, timothy, and orchard grass,” Harper says. “Wait until after a couple of good frosts, so they’re the only things growing. Then spray them with 2 quarts per acre of glyphosate. If you get rid of them, on average, you’ve increased the nutritional value of that field by at least 10 times.”

5. For Early-Season Success: Have Caution in the Rye

Some food-plot seed companies turn a good profit by selling weed seeds with a no-till label on the bag. The primary ingredient of these blends is almost universally ryegrass. Ryegrass is an invasive plant that will overtake a field in short order. Once it matures, deer basically ignore it.

Yet, the plant does have some specialized uses. It’s cheap, and it’ll green up in places where not much else will grow, like those shaded roadbeds and deep-woods openings inaccessible to equipment. Deer will hammer it during its first few weeks of life, too. If your objective is simply to sweeten a spot near your stand and maybe fill an early-season tag, planting ryegrass at just the right time and place can work. Just keep it out of your primary food plots—and know that you can save a bunch of money by skipping the no-till blends and buying a bag of ryegrass seed from the co-op.

“Many hunters get ryegrass and annual cereal rye confused,” Harper says. “They are two different plants. There is no situation in which I would personally plant ryegrass, but annual cereal rye is a cool-season grain that has actually been shown to be more attractive to deer than winter wheat.”