How to Use Early Scrapes to Ambush a Trophy Buck

They’re not about the rut—but find one and you’re on your way to a wall-hanger. 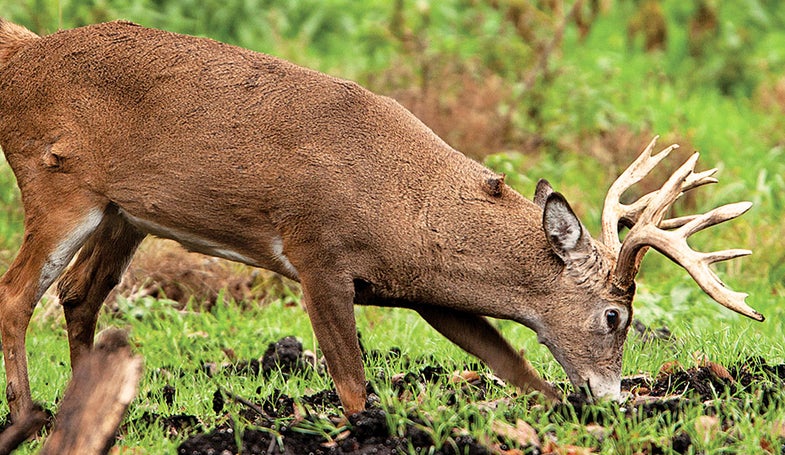 A Midwest buck makes one of the first scrapes of the season.. Lance Krueger
SHARE

Scrapes can be hotspots during the rut. Bucks are pumped with testosterone and use them to alert does to their status and virility. But bucks also make scrapes way before the rut. Those early signposts can be terrific spots to ambush a mature animal in August and September, when breeding is still weeks away.

The key to capitalizing on these early scrapes is knowing how they differ from later rut scrapes. In October and November, scraping is all about breeding and communicating with does. But in August and September, it’s a guy thing.

Bucks make these signpost markings in late summer to assert their status among males in the herd. Biologist John Ozoga calls early scrapes “an aggressive expression of dominance directed at other males” (whitetail intrigue!). They are a vital part of buck positioning in the hierarchy. And best of all: Only mature bucks make them.

Because early scrapes are directed at other bucks, they’re created in core late-summer buck areas, where bucks will be posturing, feinting, and occasionally scuffling to establish dominance. Later, bucks will expand their scraping activities—eventually, into doe living areas. That’s when the second function of scrapes takes over: letting the females know they are dominant animals and ready to breed.

But for now, scrapes serve as signals to other bucks. Find one and you’re on your way to an early-season trophy.

You’ll find early scrapes in thick, isolated bachelor hangouts, which you can pinpoint by examining topo maps and satellite photos. Look for isolated, steep, or swampy terrain with thick cover. In low country, look for overgrown marshy areas with cattails and thick reeds. In hilly or mountainous areas, focus on rugged topography with sharply defined hollows, benches, and side ridges that offer thicket-forming vegetation such as greenbrier, blackberry, plum, and grapes.

Next, concentrate on two locations: the areas surrounding these buck bedding sites, and the travel corridors they use as they make their way toward evening feed fields.

As you search for satellite scrapes around the bedding ­areas, be careful not to venture too close to bucks’ daytime hangouts. And watch the wind so your scent doesn’t blow toward them.

Along travel corridors, keep in mind that the oldest bucks often won’t reach those destinations until full dark. The closer you can locate scrapes to bedding cover, the more likely they’ll produce daylight shooting opportunities.

To be worth watching, scrapes should be 2 to 4 feet across and freshly tended. A series of several large scrapes is best of all, but often in early season you’ll find only one. That’s enough.

Look for the Lick

Often the licking branch—which is virtually always what entices the buck to create a scrape beneath it—will alert you to the site before you actually see the scrape.

It was just such a small, suitable tree that clued me in on a scrape site two years ago during a scouting trip on my farm. A small rise hid the scrape itself, but the maple sapling’s first branch looked perfectly positioned to draw a buck’s interest.

When I crested the hill I found the branch was bent and chewed. I also found a huge fresh scrape—that later yielded a heavy, mature 8-point.