Reconnect With an Old Friend, Win a Book

“There aren’t any deer here,” claimed the youngster on his first hunt. “Quiet and don’t move,” replied the old man... 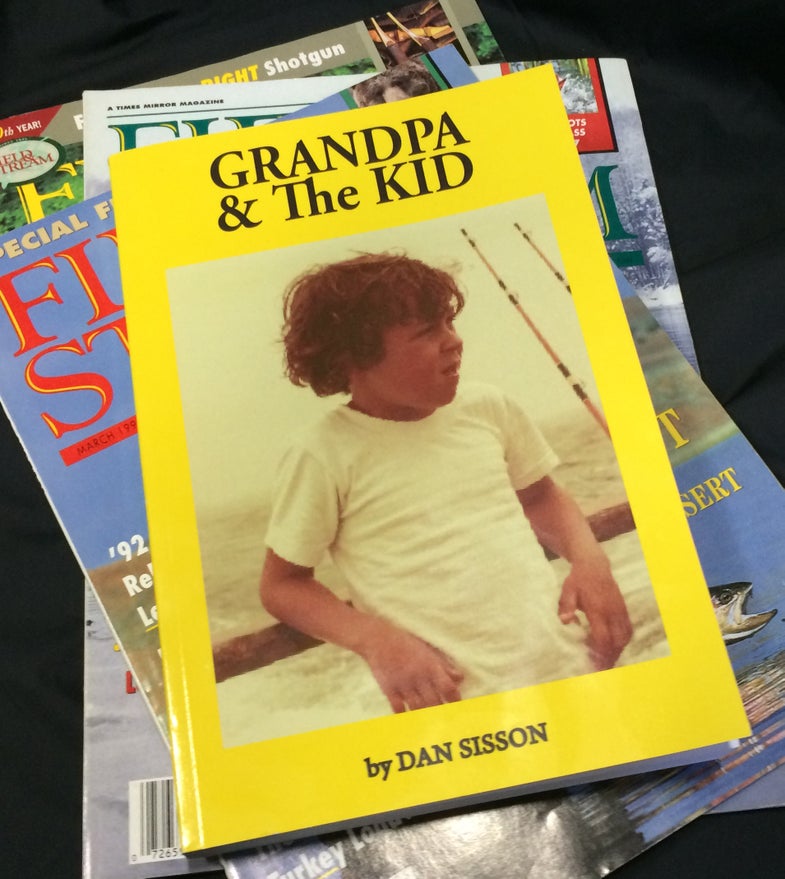 Author Dan Sisson has collected his favorite columns in a new book.
SHARE

“There aren’t any deer here,” claimed the youngster on his first hunt.

“Quiet and don’t move,” replied the old man on his fortieth deer hunt.

If you’re lucky, you had a mentor like the “old man” above—someone to take you afield in search of deer, ducks, trout, and more. Field & Stream has always celebrated the bonds that form in the outdoors, and back in 1983, the magazine started publishing columns by Dan Sisson under the rubric Grandpa & the Kid. His stories examined the strong relationship between a boy and his grandfather as they hunted, fished, and explored the woods and waters of Oregon. But beyond detailing their activities, the columns focused on the importance of sportsmanship, fair chase, patience, and determination. For these reasons, it remains a reader favorite, despite the series’ end in 1995.

Now, for the first time, the author has gathered 25 of the best columns into book form. If you’d like to win one of three signed copies, tell us a little about your hunting or fishing mentor, or someone you mentored, in the comments section below by August 12. And if you’d rather not wait, buy a copy directly from the author by emailing him at danjsisson@gmail.com.

Below is an excerpt from the book. This story was originally published in November 1994, and it will take you back to a simpler time—before teenagers (and their parents) spent more than seven hours a day on social media. —The Editors

Grandpa was in the kitchen sipping coffee when I asked where we were going deer hunting this year.

“The usual place,” he drawled. “Less’n you got someplace better. Why?”

“I was at the North Fork store today and a bunch of men were saying this’ll be the worst deer hunting year on record.”

“Because of the drought,” I continued. “They said the creeks are drying up and even the North Fork is down to a trickle, and the grasses and berries are gone. There’s no water anywhere and—”

“Hold on!” Grandpa interrupted, the look on his face changing from curiosity to impatience. “I’ve told you a hundred times not to listen to idle talk. Half those character never see a deer all season, much less fill a tag. Don’t waste time worrying ’bout claptrap.”

“But, Grandpa,” I protested, “I saw the North Fork today and it’s way down. And I went by those creeks and there’s no water in ’em. Just go up there yourself and see. And Mr. Morris said the leaves were so dry you couldn’t walk through the woods without telling every buck for miles around that you were coming his way.”

“Hmmm…,” Grandpa murmured, looking concerned. “Maybe this needs looking into. Ol’ Earl’s right sharp about what goes on in the woods.” He paused, drumming his fingers on the kitchen table while he made up his mind. “Tell you what, kid. We’ve got three weeks before opening day and we need to do some scouting. ’Cause if Earl’s right, we just might have to find a new place to hunt. We’ll know after we’ve seen for ourselves. Right?”

I gave him a skeptical look and replied, “Grandpa, I already saw those streambeds today. It’s just like everyone said; they’re empty. We’re having a drought, aren’t we?”

“Yep!” the old man replied, grinning. “Just like the rest of the country.”

I could see that nothing I’d say would impress him, so I let the conversation drop and decided to wait until the weekend to prove my case.

For the next few nights, Grandpa was absent from the dinner table. When I asked Grandma where he was, she responded mysteriously, “Oh, I imagine he’s doing something with his cronies.” When I suggested he might be scouting for deer, I got the same vague answer, which seemed strange. Grandma was the kind of woman who, at a glance, would notice the smallest utensil out of place in her kitchen. She was a stickler for detail in everything else, too.

After school on Friday, I rushed home, determined to get the truth out of Grandma. But as I neared the driveway I saw the pickup sitting in its usual place and the old man outside waiting for me. He greeted me with a big smile. “Where’ve you been all week, kid? Your Grandma tells me you’ve been actin’ like a faithful dog—worried sick when his master is out of sight.”

“Well, I haven’t seen much of you for the last few days, and Grandma wouldn’t tell me where you were.”

The old man had a triumphant look on his face, but I had no idea what was behind it. “You been fishing?” I probed.

“Nope,” he replied, not about to reveal anything.

“Well, what’ve you been doing for four days?”

Without batting an eye the old man said, “There’s nothing more obnoxious than a nosy, pestering kid. All I’ll say now is you’ll find out tomorrow.”

The next morning Grandpa suggested we go for a ride and we headed up the Smith River Road. Grandpa didn’t talk much except to remark how the blackberry bushes had already turned brown and what that meant for the quail.

When we turned off at the North Fork 20 minutes later, I pointed out how low it was. And whenever we passed a creek I mentioned that there was no water in it. Grandpa just slowed down each time and mumbled, “Looks pretty grim, doesn’t it?”

When we got to the old Holmes place, where Georgia Creek cuts under the road, the old man pulled onto the shoulder and said, “Let’s take a closer look at one of these creeks, kid. Maybe we can find some deer sign in a streambed.”

We struggled through blackberry brambles and other kinds of vines on the bank, but in a minute we were standing on a clean white sandy bottom about 15 feet wide.

I looked at Grandpa. “See? What did I tell you? No water. So there won’t be any deer.” I was proving my case and feeling better by the minute.

Then Grandpa got a devilish look on his face and suggested we go a bit farther. “There’s springs up here that feed Georgia Creek,” he said, “and I can’t believe they’ve gone dry.”

We trudged along, with sand crunching under our feet and the sun beating down on us. The creekbed twisted and turned. We fought spider webs and branches that had gown across the steam, especially where it narrowed. After swatting my 10th blackfly, I asked, “How much longer do we have to walk?”

Grandpa responded by pointing to a fresh scar on a tree, about 18 inches from the ground. “What’s that,” he asked.

The old man didn’t answer. He motioned for me to go forward and whispered, “Just a bit more and we’ll stop. But be real quiet now, kid. If there’s any deer in here we don’t want to spook ’em.”

I had my doubts but I walked on quietly. Then I noticed a small channel of water cut into the middle of the creekbed. We made a turn and all at once I stopped in my tracks. Right in front of us was a 4-foot-high dam holding back a huge pool of shallow water that stretched back into the woods as far as I could see.

Grandpa immediately put his fingers to his lips to keep me quiet. I heard a sharp craackk! and saw a brown body dive into the water. Then several more bodies made splashing noises and other crraackk! sounded in the distance—a beaver making a warning dive. We were standing next to a beaver colony.

Right in front of me was the dam: a tangled mass of sticks with mud smoothed on top. It extended 100 feet or more in both directions and curved out of sight. I couldn’t believe my eyes. I hadn’t seen this much water in one place in months.

We stayed perfectly quiet. After about 10 minutes a grizzled old beaver came from out of nowhere to check us out. He swam around in a circle 20 yards away from us and then disappeared again.

Grandpa motioned for me to follow him around the edge of the dam. We walked through dense brush for about 100 yards before he stopped and whispered, “Look at what those little devils have done. They’ve dammed up Georgia Creek and made a freshwater lake back here that’s useful to ducks and muskrats and all kinds of creatures. And just look at these canals. I’ll bet if we walk along one we can find out what kind of animals are using this area for their water.”

We walked beside a ditch that was 3 feet wide and 2 feet deep. Along its edges were dozens of animal tracks. Obviously this was a nighttime thoroughfare for dozens of animals. Grandpa stopped at a point where the canal ended on a muddy bar. “Look at those deer tracks,” he said. “There must have been a dozen blacktails here last night or early this morning. Right here, kid.”

I looked down and then at Grandpa. He didn’t have to say another word. I had gotten the message and he knew it.

As we were walking back I asked him, still in a hushed voice, “Why didn’t you tell me this was where the deer were, Grandpa. I had no idea.”

“But I wouldn’t have questioned you if you had told me there were beavers up here on the North Fork.”

“That wasn’t the point, Alan. You kept telling me how you’d driven past all these creeks that had no water and how there wouldn’t be any deer here because of that. Well, you did the one thing a real hunter should never do.”

“Go along with the road huntin’ crowd. They never get out of their pickups to actually go into the woods and see for themselves what the conditions are. You accepted their judgment about the deer being gone and the creeks being dry. But what you see here is that there’s plenty of water for the animals in this area—just behind that one dam. And there are others I can show you, too.

“So that’s what you’ve been doing for the past four days—scouting?”

Grandpa smiled. “Yep! I got out here and walked these streams and found out for myself. I didn’t take anybody’s word for it.”

“Well, you sure showed me.”

“Remember that scar I pointed to on that tree? That wasn’t a deer rub. It was a beaver scar. Some beaver took a bit of that sapling to see if it was tasty enough to store for the winter. He must have figured he’d let it grow some more to get a better flavor. So maybe you learned something about beavers today, kid?”