We spent four days testing the year’s top new vertical bows and crossbows—more than 20 models in total. Here are the ones you’ll want to hunt with this fall. 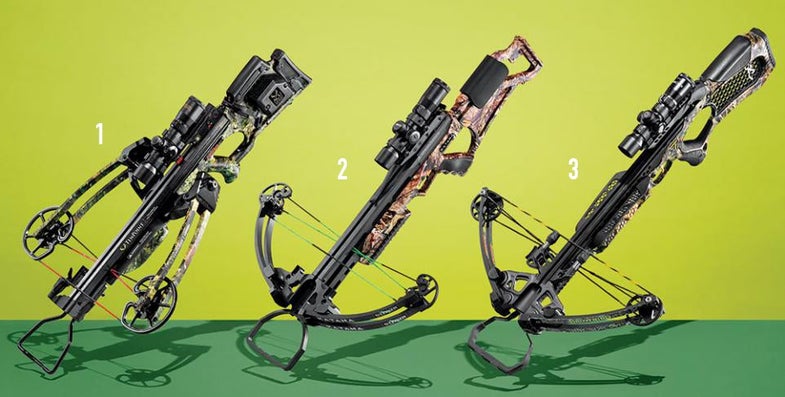 In March, F&S deputy editor Dave Hurteau and I met hunting editor Will Brantley in his hometown of Murray, Ky., for the annual F&S bow and crossbow test. After four full days of shooting, crunching numbers, and arguing, we still didn’t know which new flagship models would claim our top spots until we’d added up the last decimal points. It was that close. Out of a potential total score of 100, only a single point separated the top three compounds, and only 3 points separated the top three crossbows. The good news for you: There are lots of great new models on the shelves this year. Here are the very best of the bunch, plus the full scoop on one barn burner of a bow test.—S.B.

We tested power by measuring speed and calculating energy via a chronograph, using factory-provided bolts. We gauged noise with a decibel meter and trigger weight with a Lyman trigger scale. Next, we measured accuracy by taking the average of three groups of three shots from a benchrest at 30 yards. Several bows were equipped with mechanical cocking aids, but we tested effort with standard rope-cocking devices. Finally, we evaluated handling, fit and finish, and safety. We scored each category on a 1 to 10 scale, and doubled the key ones of accuracy and power. New for this year, we also doubled handling because manufacturers have made such strides here lately. This made for a total possible score of 110 points. We began with 15 new crossbows and narrowed it down to the best 10. Prices shown are with factory-provided accessories.—W.B.

BEST OF THE TEST

TenPoint got it right with this, its first reverse-draw compound. It wasn’t the lightest bow in the test, but it was certainly the handiest when cocked, at just 10 inches axle to axle. The RDX tied with the Stryker Katana for the top spot in accuracy, with .75-inch average groups. Combine that with plenty of power, a crisp 2-pound 4-ounce trigger pull, and impeccable fit and finish (not to mention very good looks), and the numbers added up to Best of the Test honors. The sticker shock may be a little tough for some to swallow, but this is a contest for the top new crossbow of 2016, regardless of price—and you’re looking at it.

The Katana is proof that a standard compound crossbow design can still hold its own—provided it’s a really good one. Although the Katana did not excel in every category, it did well in all. The trigger was quite good, but not great, breaking at almost 4 pounds. The bow itself is light and handy, though a few others are more so. It’s fast, but energy is sacrificed somewhat due to the lightweight bolts. It did excel in a key category, however: accuracy. Like the TenPoint, the -Katana averaged .75-inch average groups. It also tied for the quietest bow of the test, and it was among the easiest to cock, too. Put it all together, and you’ve got a killer hunting bow.

Browning makes its debut in the crossbow market this year with a pair of new models that are built by Barnett but have very much their own style and performance. We tested the One-Six-Two model, and like the Stryker Katana, it’s a standard-design compound crossbow with a light draw weight that did well in just about every category. This bow is exceptionally easy to cock (and a crank-cocking device comes standard), yet it provides plenty of power. It wasn’t the quietest bow in our test—but it was darn close. The TriggerTech trigger is exceptional, and it helped us shoot groups of just over an inch. As if all that weren’t enough, it’s a cool-looking bow, too.

This Cabela’s-branded bow is built by TenPoint, and has the quality you’d expect with that pedigree. The lightest compound model of the test, the Instinct Order averaged 1.25-inch groups. The short powerstroke makes it a cinch to cock, despite the relatively heavy draw weight—but it did cost the bow serious points in the power category.

If speed and energy are your things, look no further. Although the model name hasn’t changed since last year, this is a significantly updated version for 2016, and the winner of our power category. The trade-off is that despite the reverse-draw limbs, this bow is quite bulky. Still, it was a tackdriver with sub-1-inch average groups.

The Furious is a handier version of the KI Machine—our 2015 winner. It averaged 1.125-inch groups, and the crisp TriggerTech trigger broke at 1 pound 14 ounces on our scale. Bestul and I loved it, but Hurteau felt it was a touch too light. The bow took the hardest knocks in the fit-and-finish category, but at this price, it’s easily the best value of the flagship test.

The Revenant was second only to the Scorpyd in brute power. Its average group size was 1.75 inches—near the bottom of the field but fine for hunting. Where the bow fell short was in handling and cocking effort. Though not heavy, it is bulky—and with such a long barrel combined with the heavy draw weight, it was the most difficult bow of the test to cock.

Darton’s bullpup design puts a lot of power into a nimble package. Our test bow averaged groups of 1.44 inches and tied with the Stryker for the quietest. Our biggest complaint was about the safety, which doesn’t engage auto-matically upon being cocked; engaging it puts your thumb dangerously close to the loaded string.

A recurve design gave this bow some inherent disadvantages in our test. It was the loudest of the bunch and a bear to cock for such anemic power. We averaged groups of just over 2 inches—worst in the test. Yet its excellent handling characteristics, trigger, and accessories made it a favorite in our crowd of Eastern whitetail and turkey hunters.

The flagship of Bear’s new line of crossbows is a -reverse- draw model that has an excellent AR-style adjustable stock, Picatinny rails, and an outstanding scope. Our test model was an average shooter with 1.6-inch average groups. The trigger was fairly light but creepy. The Fisix was one of the test’s louder bows, and we found it heavy and bulky.

You don’t have to spend four figures to get a killer crossbow. Here’s proof

Though not fast, the Advantex is easy to draw and carry—ideal for youth hunters or anyone on a budget looking for a nimble whitetail bow.

The Warrior G3 is an excellent shooter with a quality scope and fine trigger. It may be a tad bulky given the power, but it’s still a great value.