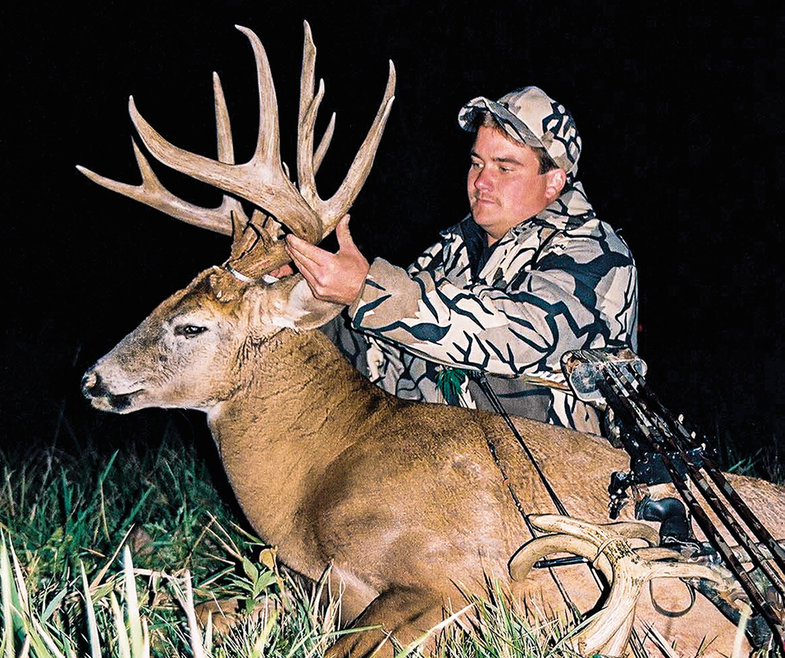 Tagging a 200-inch buck is whitetail hunting’s holy grail—something that most mortals can only dream about attaining. Yet Adam Hays has done it three times, making him part of a very exclusive group. Who better to tell you how to bag the biggest buck in your woods?

Biography: Hays has arrowed nine Boone and Crockett–class bucks including the 200-inchers above. The Ohio native says he didn’t start consistently killing big deer until he began following the Deer Hunters’ Moon Guide, a chart developed by the late outdoor writer Jeff Murray. Hays believes so much in the Moon Guide (moonguide.com) that he purchased the system after Murray’s death.

“I’m no better a hunter than the guy in North Carolina who kills a 150-inch buck every year or two,” Hays says. “All that separates the animals I hunt from those in other areas is their score. If you are consistently killing the best buck in your neighborhood, you’ve got all the tools you need to kill a 200-inch deer. If that score is important to you, you just have to put yourself in the right territory. I know it’s a cliché, but in order to kill a world-class buck you need to be where they live.”

What He Does Differently

“A lot of guys manage a specific property and do all they can to grow a big, old deer on it. I kind of flip-flop that. I go out and find my bucks first, and then I get permission to hunt the property. One of the absolute best times to find a really big deer is during summer, when they’re in bachelor groups and feeding on beans and alfalfa. They’re as relaxed and visible as they’ll be all year. That’s my time to drive the back roads, glassing for the buck I want to hunt.”

“My success went up 200-fold when I quit hunting winds that were perfect for me but dead wrong for the buck. Big whitetails never move in daylight under those conditions. What I look for now is a wind that’s nearly perfect for the buck to move and feel safe. Then I find a twist or turn on his route where, even if just for a short ways, he won’t have the wind in his face. That’s where I’ll be waiting in a stand. My other turning point was when I started following the moon position. All nine of the B&C-class bucks I’ve killed have been under a red moon, according to the Moon Guide.”

“I probably scout five or six days for every day I hunt. The old saying ‘The first time you sit a stand is the best’ is absolutely true. So I put in my scouting time to make sure that when I do go in to hunt, I’m in the right spot to kill the deer on the first sit. The second 200-inch buck I killed, I’d sat 40 nights in an observation stand that summer, glassing the field he was hitting from 300 yards away. When he came out during daylight, I noted two things: the wind direction, and which trail he used to enter the field. That kind of information allowed me to set up right and kill him the first time.”

“The toughest part about chasing a really big deer is not hunting him. You only get one crack in his wheelhouse, maybe two if you’re really lucky. It’s so tempting to go after a buck when the conditions are close but not quite perfect, but the risk is too great. I have my A spots, right in where the buck lives and where I think I can kill him if the conditions are right. Then there are my B spots, which are in the general area but backed well off and more like observation setups. If the situation isn’t perfect, I’ll sit a B spot every time. I might not kill the buck, but at least I haven’t bumped him out. If I’m patient, my chance will come.”

“Advance scouting is critical, but sometimes things change when fall rolls around, and you have to be ready to make quick adjustments. After I’d hunted my third 200-inch buck through September and three weeks into October, he just seemed to disappear. So I went for a drive and found him on the back side of the farm, chasing does in a field. I went in the next day with a Lone Wolf stand and sticks on my back, found the right tree, and killed him that afternoon.”

Adam Hays: “Focusing on huge deer forces you to take a hard look at the chinks in your armor. Otherwise, they’re sure to cost you. I consider myself a very mediocre archer. Shooting a bow comes easy for some guys, but I’m not one of them. My hands just shake. I have to practice and practice and never let up.”