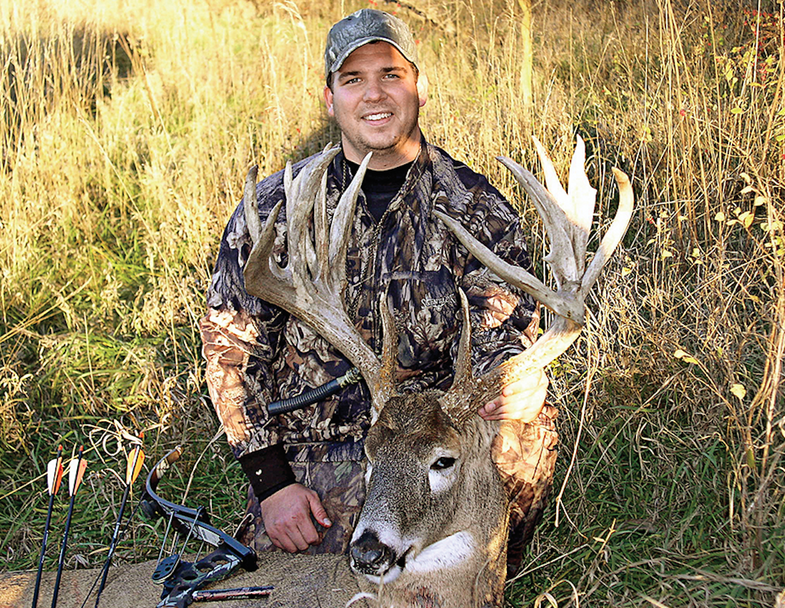 Tagging a 200-inch buck is whitetail hunting’s holy grail—something that most mortals can only dream about attaining. Yet Kris Seymour has done it twice, making him part of a very exclusive group. Who better to tell you how to bag the biggest buck in your woods?

Biography: It’s a wonder Seymour finds the time to tag any buck, let alone two 200-inchers. A full-time middle school teacher, Seymour also operates a part-time guide service ­(seymour​bucks.com) and a real estate agency specializing in recreational properties ­(be​­outdoors.com). Married and the father of three budding hunters, Seymour fits whitetail hunting into this very busy life. Which may be why he is such an aggressive hunter. In the relatively open terrain of his Kansas haunts, Seymour brings a Western approach to tagging giant whitetails.

“I think people give big whitetails too much credit for intelligence and even survival skill,” Seymour says. “Mostly I think they’re just really lazy. They find a little spot of really thick cover, and they don’t stray far from it. Where I live, an old buck can find everything he needs in a 50-acre radius for most of the year. The trick is finding that tiny chunk of real estate so you can get on him.”

“Late winter and early spring is my favorite time to scout. I love to get on a new farm and just walk anywhere I want with no fear of spooking a buck I want to hunt. That’s the time to find a kill tree—where you can hang a set and know that when the rut is on you can shoot a giant. Finding a spot like that is a matter of looking at buck sign and how it relates to terrain. When you see rubs and scrapes in any type of funnel, you know it’s a spot bucks will use every year.”

“I’m a really aggressive hunter. Both of my 200-inch bucks were deer I stalked. I spotted the first one bedded with a doe as I drove down a road. I grabbed my bow, took mental note of the tree he was bedded near, and just started slipping in. I shot him when he rose from his bed at 5 yards. The second buck I watched, from my stand, get out of his bed about 100 yards away. He was staging up—rubbing trees and waiting for dark before he fed. It was windy, and I knew I couldn’t make a good shot from the stand, even with the muzzleloader I had. So I just climbed down and walked right at him. With the wind blowing, he never had a clue I was there until I was at 20 yards. He looked at me like, How did that get there? and I shot him. A lot of guys wouldn’t try that. But sometimes big deer won’t come to you, and you have to go to them. You can’t be afraid to make things happen.”

“Baiting is legal here in Kansas, and I see most hunters rely on that, or food plots, way too much. Look, big bucks are going to use those spots, but they’re not going to be stupid about it. If you’re barging in there on a regular basis, the only way you’re killing an old buck is if a doe drags him in, and even then it’s going to take luck. Instead, scout around the spot to find rub lines or scrapes that tell you how the buck is working the area, and hunt that sign.”

How He Fakes It

“I love to hunt the rut with a decoy. Our bucks have a ton of competition to breed, so when they see another ‘buck,’ they’re going to come. I stake the deke 10 to 15 yards out, and I like to have some kind of obstacle downwind, like a steep ridge or fence, so they can’t circle and smell me. But most of the time they come straight to the deke. There’s nothing more exciting.”

Kris Seymour: “If you want to shoot a really, really big buck, you’re going to have to let some absolutely great bucks walk, and that can be very tough to do, especially when you’ve got a 160- or 170-class buck standing right there, giving you a perfect opportunity—and odds are, you’ll never see him again.”