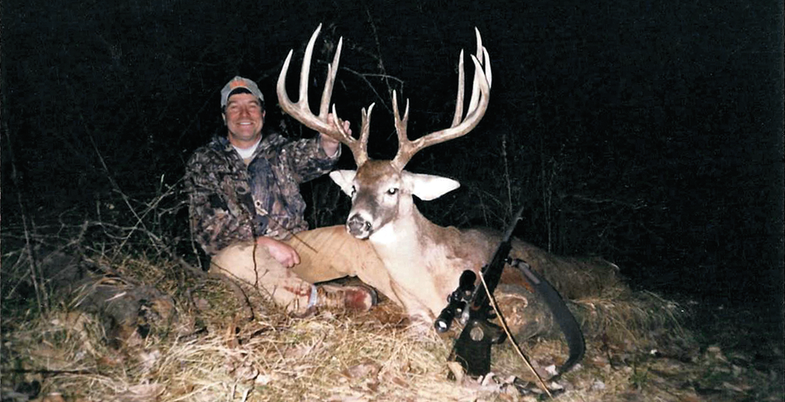 Tagging a 200-inch buck is whitetail hunting’s holy grail—something that most mortals can only dream about attaining. Yet Sam Collora has done it three times, making him part of a very exclusive group. Who better to tell you how to bag the biggest buck in your woods?

Biography: Collora and his wife, Judi, own Mrs. Doe Pee Buck Lures (mrsdoepee.com), and he also runs a successful archery shop, American Outdoors. Most of Collora’s hunting is on relatively small tracts of land that he either owns or has permission to hunt.

“They’re just genetic freaks,” Collora says. “You can manage for older bucks, but only a precious few will reach that magic mark. There are bucks that hit 140 and will never get any bigger no matter how long they live. I’ve just been blessed to be in the timber with three truly amazing deer.”

“I’m a damn antique. I hardly know how to run a trail camera. I just read sign, try to spot a big deer from a distance, and then rely on my knowledge of how deer move through my properties. One mistake I think a lot of guys make is walking all over their properties during the season. I’m convinced deer are way better at patterning us than we are at patterning them, and older deer are very intolerant of pressure. They find little places where they feel safe, and if you start messing with those, they just move.”

“Raising deer has made me a better hunter. You’d be amazed, for example, how much deer talk to each other. For that reason, I’m never afraid to grunt or bleat. I’ve also learned to read a deer’s mood, which can tell you a lot about how aggressively to call or rattle, when to draw, or whether to aim low so he won’t duck the arrow. Ears that are moving around, for example, mean a relaxed deer. If a buck’s glands—both the tarsal and preorbital [near the eye]—are flowered [flared], the buck is agitated. If they are slicked down, he’s relaxed.”

“My captive deer tip me off to good movement. If they’re all up on their feet, it’s time to get in the woods. And it’s the same with livestock. If you’re driving by a farm in the middle of the day and every cow you see is lying on its belly, you don’t have to hurry to your stand.”

“Some spots you just know are right. The year I killed Shipwreck­ ­[Collora’s 2011 buck], for example, I’d done some hinge-­cutting on a ridge where he lived. When I finished, I hung a stand in what I knew was the right spot and walked away. I didn’t visit it again until the day I arrowed Shipwreck.

“With a climber, I like to move from the outside in. My first setup might be in what looks like the right spot, but I sit it and realize I need to move 50 yards closer.”

On Keeping It Together

“There’s so much that can go wrong when a big buck comes in, so I try to control what I can. As soon as I crawl into the stand, I go over everything on my bow to make sure nothing has been moved or bumped. Then I look for the one spot where it’s going to be toughest for me to kill a buck. I figure out how I’ll kill him there—and you’d be amazed how often that’s where he’ll appear.”

Sam Collora: “When you are lucky enough to tag a true giant, you find out in a hurry who your friends aren’t. It’s disappointing, because you’re out there for all the right reasons, and people make up all kinds of crap about you and how you shot your deer. You can’t let it get to you. Be proud and thankful.”