How to Arrow a Huge Early-Season Bachelor Buck 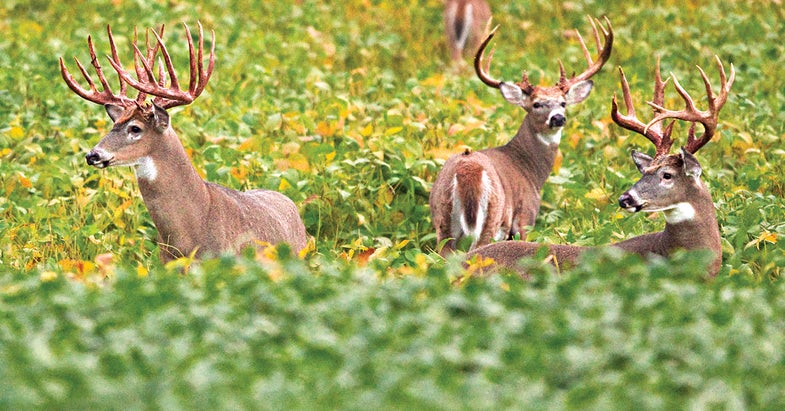 These bachelors don’t care about cologne or online dating. They carry antlers and pot guts swollen with soybeans. A big bachelor buck on his predictable summer pattern is the easiest big buck you’ll hunt all year, but he’s still no pushover. Use these tips to take one this September.

If you don’t have a beanfield to hunt in September, try to find one. They’re the surest early-season food source out there. “Shedding the summer coat and growing the winter one requires even more protein and energy than developing antlers,” says Dr. James Kroll. “When you start seeing deer’s coats go from red to gray, you know they’re seeking out protein. Soybeans are about 34 percent digestible protein, and that’s why deer swarm to them early in the season.” If you don’t have soybeans in your area, look for other green, high-protein chow. Alfalfa fields and clover plots are a reliable second and third option. But if soy grows in your area, find a field now.

Bachelor groups will often do the same thing two, occasionally three, evenings in a row—but seldom four. When you see that 10-pointer step into a cropfield with his homeboys on the opening afternoon of bow season, don’t dally. Move in to kill him the next afternoon. If the wind won’t allow a treestand setup, hunt from the ground.

Young bucks in bachelor groups are “toadies” that mature bucks love to use as sentries. That’s why the young bucks are usually the first to appear in a field. Study your trail-camera photos carefully and learn exactly what the toadies running with your shooter look like. When you see them, clip your release to the string.

Mature bucks move best in the evening during the early season. But if you can find a good rub line in September, you’ve found a great spot for a morning stand.