Tagging a 200-inch buck is whitetail hunting’s holy grail—something that most mortals can only dream about attaining. Yet each of these four men has done it at least twice, making them part of a very exclusive group. Who better to tell you how to bag the biggest buck in your woods? 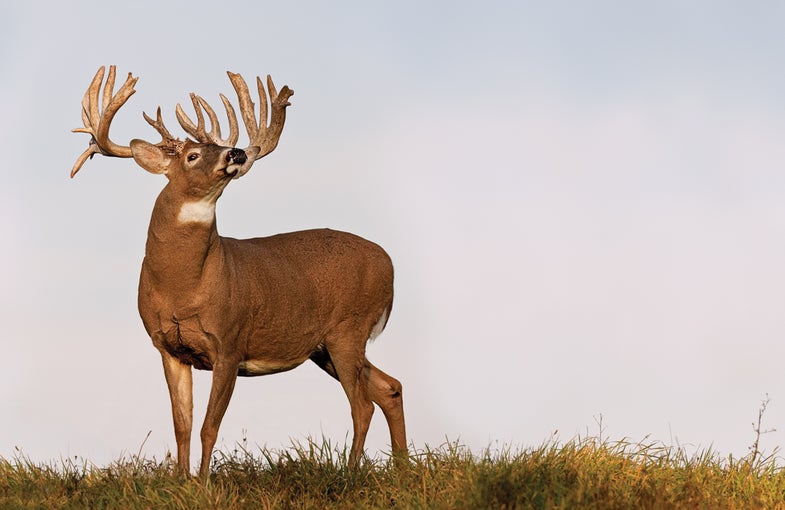 Killing a whitetail buck whose rack grosses 200 inches or more requires a trio of unlikelihoods. First, the buck has to be an absolute genetic freak—the equivalent of a superstar athlete, but with just the right stew of DNA to produce a titanic mass of bone on its head.

Second, the buck has to run a gauntlet of cars, predators, hunters, winters, disease, and accidents to survive at least 4½ years.

The third thing is probably the most unlikely: That almost mythical buck then has to appear in front of a hunter who has the right stuff to overcome an off-the-charts adrenaline dump and put a bullet or arrow in the right spot. Most of us struggle with buck fever to some degree, but imagine trying to keep it together while a whitetail that appears to have a porcelain chandelier between its ears is walking your way.

Each of the men featured has pulled off this stupendous feat more than once, which makes them part of whitetail hunting’s rarest group, the 200-Inch Club. It took us a while to even find four members for this story—hunters who live in the handful of places that can produce such an animal; who possess the skills to find, pattern, and kill a world-class deer; and who want to share their secrets for getting on the biggest buck around and putting him on the wall.

Biography: Owen is a construction contractor when he’s not installing food plots and doing habitat work on the 10 farms he manages. The longtime Drury pro staffer has tagged 40 Pope and Young–class bucks. Missouri has flown under the radar of a lot of whitetail nuts, but Owen has proved the state’s potential.

Biography: It’s a wonder Seymour finds the time to tag any buck, let alone two 200-inchers. A full-time middle school teacher, Seymour also operates a part-time guide service and a real estate agency specializing in recreational properties. Married and the father of three budding hunters, Seymour fits whitetail hunting into this very busy life. Which may be why he is such an aggressive hunter. In the relatively open terrain of his Kansas haunts, Seymour brings a Western approach to tagging giant whitetails.

Biography: Hays has arrowed nine Boone and Crockett–class bucks including the 200-inchers above. The Ohio native says he didn’t start consistently killing big deer until he began following the Deer Hunters’ Moon Guide, a chart developed by the late outdoor writer Jeff Murray. Hays believes so much in the Moon Guide that he purchased the system after Murray’s death.

Biography: Collora and his wife, Judi, own Mrs. Doe Pee Buck Lures (mrsdoepee.com), and he also runs a successful archery shop, American Outdoors. Most of Collora’s hunting is on relatively small tracts of land that he either owns or has permission to hunt.

How to Join the Club