Three Ways to Tag a Buck in Dense Farm Cover

Farm-country whitetails are drawn to standing corn for the food and cover it provides. But corn poses problems for hunters,... 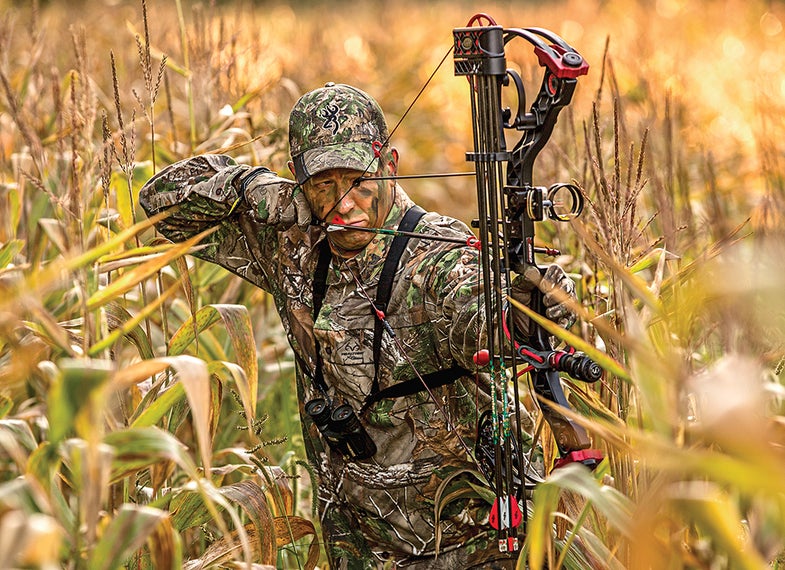 Farm-country whitetails are drawn to standing corn for the food and cover it provides. But corn poses problems for hunters, because seeing—much less actually killing—a buck when he’s living in rows planted just 30 inches apart is no small feat. Nevertheless, it’s still possible to pluck a buck from a cornfield. Here are three proven methods for pulling it off.

Whitetails are creatures of the edge, and that holds true for a cornfield. The vast majority of deer using a cornfield will bed and feed within the first 20 rows, wandering between the security of the corn and the adjacent cover. Even better, the hard edge formed by the cornfield is a perfect travel corridor. This makes hunting from a well-placed stand or blind near the edge a top tactic.

For stand hunting, focus on trees in two key locations: cornfield corners that abut a woodlot, and brushy or wooded fencelines that bisect a field. Deer will have a well-defined trail at every woodlot corner; a stand placed downwind will definitely overlook action. A fenceline that separates the cornfield from another field or cover type is also a killer spot, especially during the rut. If no trees grow on the fenceline, just tuck a stool a few rows back from the edge, and clip enough leaves from stalks to create a shooting lane. You’ll have to be on your toes with this setup, as you won’t see a buck until he’s right on top of you.

One of the most exciting ways to hunt a cornfield is simply to stalk across the rows, searching for bedded and/or feeding deer. This tactic works best on a windy day, for two reasons. First, deer will often seek shelter from the wind by tucking themselves into the cornfield. Second, the background noise of a steady wind rustling the stalks will cover any sounds you’ll make as you slip between them.

The drill is simple but tedious. Starting on the farthest downwind end of the field, stick your noggin into the first row of corn. Scan left, then right (or vice versa), and search for a bedded or feeding whitetail. Assuming you don’t see a buck in the first row, you step into that row, then repeat the process until you emerge on the other end. Move down about 30 yards, and repeat the process, crossing the rows in the other direction. Repeat until you’ve covered the field.

Flushing deer from standing corn is never easy, but a handful of drivers can accomplish the task with a staggered drive. Four drivers can handle a small field; use more for larger ones. Drivers should line up several rows apart, with the wind blowing their scent into the corn ahead. To start the drive, the first and third drivers walk 20 to 30 steps into their respective rows, then stop. Then drivers two and four start, walking until they catch up to one and three. Repeat this staggered movement to the field edge. The stop-and-go progress, combined with human scent blowing toward deer, unnerves bucks and nudges them out.

Poster placement is critical. Because the wind is blowing into the drive, bucks will try to run into the breeze (or at least crosswind) as they escape. They’ll want to squirt out the sides of the drive, or even double back into the drive. So place at least one poster on each side of the corn, plus another to cover the back door. Drivers should only shoot at a deer if it’s in the row they’re walking, and posters should never shoot toward the corn itself.