Why Sage Grouse Are a Real Western Trophy

On opening day of sage grouse season, the birds did not come easy, but the long-awaited hunt was the real trophy. 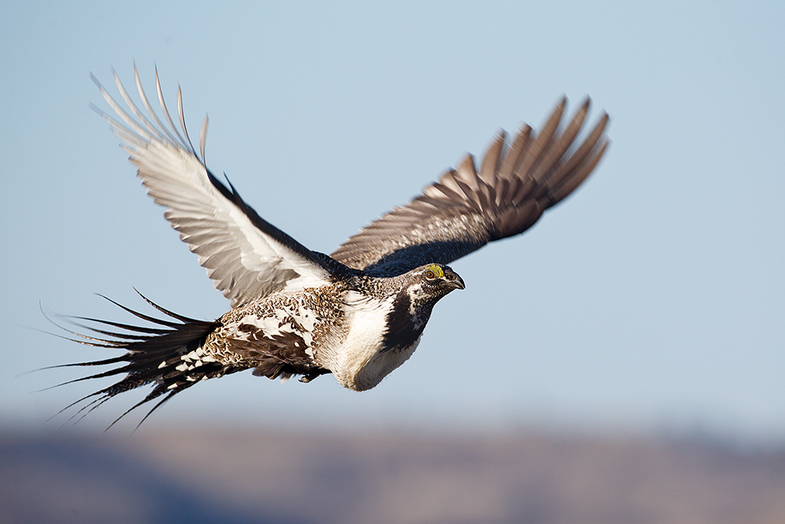 The news we’d been waiting for was finally delivered—along with a hearty platter of bacon and eggs. Over breakfast, the ranch manager announced that U.S. Secretary of the Interior Sally Jewell had just decreed the greater sage grouse would not be listed as an endangered species. Our group had traveled hundreds of miles to this camp near Saratoga, Wyo., hoping for the chance to hunt the West’s most iconic upland bird. The announcement was all the motivation we needed to wolf down breakfast, lace up our boots, and hit the field.

We started above a valley leading toward the northern edge of Wyoming’s Sierra Madre range. The wide draw had just enough moisture to cut a green line through the sage-covered hills, now gray-brown in the late-summer heat. A cottonwood marked the beginning of our walk, the end a blur in the distance. We practically jogged through the grass as the dogs bounded ahead.

Two hours later, our enthusiasm had withered under the oppressive, inescapable sun. Water bottles were empty, and the dogs were worn out, tongues hanging long and low. A few voices argued for pressing on, but the rest of us revolted. We turned around, complaining about the long walk back to the trucks.

Our straggling group had dispersed into a wide arc. George Thompson and I made a beeline for the vehicles and a promise of water. To our right, Ethan Pippitt and Brian Lasley followed Vex and Mandi, a pair of German shorthairs. Farther past them, the dainty setter Annie led Andrew Howard and Brad Fitzgerald along a fenceline. The trucks’ windshields had just begun to shimmer over the next hill when the first gunshot boomed.

Two sage grouse, big as bowling balls, fled untouched from Pippitt and Lasley. Pippitt fired again, but the birds set their wings and sailed away, lighting over a weedy terrace a short way past the trucks. We were too beat and thirsty to feel invigorated by the sight of the birds. Still, none of us gave a second thought to walking them up. Vex locked on the scent, and Lasley dropped the first bird. I skirted the brush where the other bird had landed. Even though I was ready for the flush, it surprised me and I whiffed. My second shot connected, bringing down the sage grouse in a puff of feathers.

We’d covered 7 miles that morning—with just two sage grouse to show for it. At that moment, had I been asked to vote on listing the bird as endangered, I might have raised my hand.

Though sage grouse numbers have declined in the face of habitat destruction and overdevelopment, the species is far from endangered status. Exact numbers are hard to come by, but the Western Association of Fish and Wildlife Agencies approximates the breeding population at 424,645. Our hunt, like many others, was saved thanks to the efforts of an unlikely group of allies: Sportsmen-led conservation organizations, federal and state agencies, landowners, ranchers, and environmental groups worked together to find a solution that would protect the bird and its habitat—some 173 million acres scattered across 11 states. Listing the sage grouse as endangered would have hampered the very efforts meant to save it, limited sportsmen’s access to public and private lands, and locked out ranchers from historic grazing areas. Instead, the Sage Grouse Initiative brought together disparate groups to protect habitat used by sage grouse, mule deer, antelope, elk, and other species through conservation-minded ranching practices and sustainable land use.

As our group learned, just because sage grouse are fair game doesn’t make them easy to hunt. We had access to thousands of acres of the Silver Spur Ranch and BLM land, and a solid game plan, yet finding grouse in all of that arid country was still a challenge.

Sage grouse are large—up to 6 pounds and nearly 2 feet tall—but they can disappear in the sage. Careful scouting is crucial. We gathered as much intel as we could, asking cowboys and locals where they’d seen grouse, penciling our maps with Xs at likely locations, and drawing wide circles around water holes that we hoped hadn’t disappeared in the heat.

Without that local knowledge, plan on plenty of windshield time, driving roads and trails. Treat sage grouse like big game: Find a high point and glass as much country as you can. With its head peering above the grass, a sage grouse that’s not being hunted can be easy to spot. Once you find grouse, hunt them as you would pheasants, walking them up with a stealthy approach from the downwind side to give your dogs the advantage.

On day two, we spotted a flock of five or six birds along the shores of a small lake and planned a sweeping sneak attack. By the time we skirted around them, however, the birds had vanished, and two more hours of hiking the corrugated landscape failed to turn up so much as a feather.

As it turns out, the flock we were after had flown across the lake, flushing ahead of our not-so-secret approach. Only after more miles walked did we find them. Again, the flush came as a surprise, but Fitzgerald, Pippitt, and Lasley all managed to drop birds.

At hunt’s end, we each had something to show for our efforts—sunburns, blisters, cactus spines, for sure, but also the dark, red flesh of sage grouse breasts for the pot and a few mature males, with their distinctive, spiked tails, headed to the taxidermist. The real trophy, though, thanks to hunters, ranchers, and conservationists, belongs to everyone: the chance to experience a hunt for this Western icon.

GEAR TIP: E, as in Essential

Sage grouse habitat is big country, and a wide-ranging dog is a must. The R.A.P.T. 1450 Upland Beeper e-collar ($270; dtsystems.com) keeps you in touch with a 3⁄4-mile range and 16 levels of corrections. The beeper is extra-loud too—something you’ll really appreciate when Rex locks up on a flock deep in the sage. —D.D.