The latest top models to convince ducks and geese to come your way. 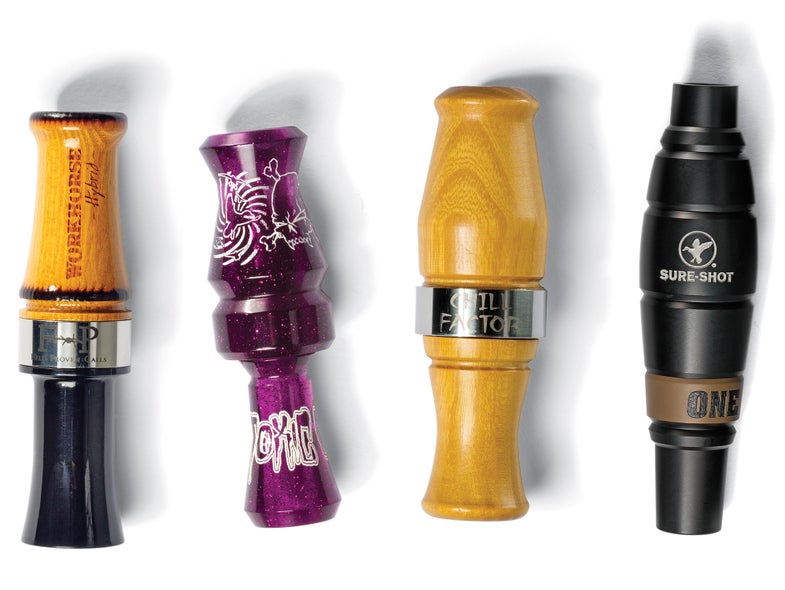 Louis, our new FedEx driver, had been making daily stops at the house for two weeks earlier this year to drop off small but bulky padded envelopes. “Duck and goose calls,” I told him when we weren’t talking fishing. A fellow water­fowler, he smiled. “It’s getting close.”

The season is indeed drawing near, and with it comes a wealth of new duck and goose calls designed to take you nearer to aural avian perfection than you’ve ever been. Here’s my pick of the best of what’s out there this year.

Designed and tested by competitive calling champion Richie McKnight, the Chill Factor hit the street late in 2015. It’s an entry-level call at an entry-level price, and with a little tweaking and some practice, it will conjure up plenty of goose sounds. A good deep low end can create excellent clucks and moans, but bring your A game and a healthy set of lungs.

Field Hudnall’s Matrix short reed hangs on my work lanyard and gets called into service daily. The young Kentuckian just makes great stuff. His new shorty, the Workhorse, is surprisingly less user-friendly than his Matrix or Raptor, with a heavier air requirement. Still, for those experienced or willing to commit to practice, the Workhorse lives up to its name.

I’ve always found Saunders’s short reeds a bit challenging for my experience level—until I got ahold of his new Dark Side. The Evergreen State calling legend hits a round-tripper with this one. Tuned midrange, or so it seems, the DS should appeal to smaller dark geese everywhere.

Workingman’s duck calls at a workingman’s price that sound exactly like a mallard duck: You can’t ask for more, and Gardner keeps coming up with hit after hit. The champion’s new Buck Brush Short features an updated tone board and a shorter barrel. This means less air pressure, better control, and an incredibly user-friendly instrument. No questions on this one. Dig out $25 and hang one on your lanyard.

The Professor of Pigeon Hunting, Neal Hunt, breaks into the waterfowl arena this year with his Exodus mallard call. Available in single- and double-reed format, this all-acrylic call hits the rack at just under a C-note. It has an unusual appearance, without today’s glut of graphics. The flared mouthpiece is extremely comfortable. Overall, the call is very well balanced. Breathy chuckles and gabbles come easy.

I can’t say I’m into the skull-and-dagger artwork so prevalent in today’s waterfowling. If you are, fine. If not, look past the graphics because Toxic’s Super Short is a hit. It’s got a nasty guttural sound and plenty of volume for those wide open spaces. But the SS isn’t for beginners; there’s definitely a learning curve involved.

Owner David Jackson’s background rests in 27 years with the former P.S. Olt Co., makers of the legendary D-2. The Cutdown Hedge again proves Jackson crafts simple calls that sound great. The DJA-20W has range, volume, ease of use, and realism. And it’s easy on the wallet.

I can’t decide if Charlie Holder’s Yentzen One double-reed looks traditional or space-age. I’m leaning toward the latter, but as you know, pretty (or homely) doesn’t kill ducks. This new One is a revival, with roots going back to the 1950s but with modern updates. The Screw-Lock design prevents lost inserts. And the CNC body is virtually indestructible. As for sound, it’s an acquired taste—­different, but nonetheless ducky.

Son of the legendary call maker Eli Haydel, Rod Haydel makes calls year after year that ducks show up for. That’s all that’s expected out of a duck call, but Haydel has stepped things up a notch with his new Waterfowl H2O series and the double-reed Cajun Cutter in particular. This one’s truly all duck: easy to blow, sounds great with a little effort, and definitely a generational hand-me-down.