Where to Find Big Early-Season Bucks

Those mini furrows are favorite hiding places for mature whitetails. 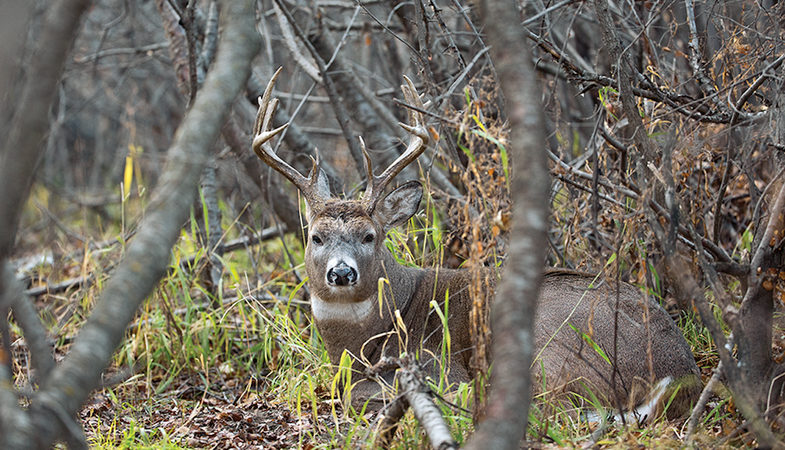 In the Groove: A Montana buck bedded in a small dip in terrain.. Donald M. Jones
SHARE

But partly because they’re so popular with both deer and hunters, deep hollows and canyons often aren’t the best spots to find a mature early-season buck. Sometimes subtler habitat features—less pressured by hunters and less used by other deer—are what these reclusive loner bucks prefer.

One favorite is a small fold in the topography that often furrows off of a major ridge, knoll, or plateau between the larger, more obvious hollows and coulees. Folds are easy to overlook. And that’s partly why mature bucks like them.

I first discovered these neglected hotspots on my way to a larger, more sharply defined hollow. I had worked up one steep draw, and after catching my breath, headed for the next one a quarter mile away.

I didn’t make it. Not 75 yards from the top of the first hollow, a vague intuition made me slow down. Antler tips jutted out from a raspberry patch in a small fold in the terrain 30 yards away. Unfortunately for me, my arrow flew high.

But since then, folds have become a feature I always look for in a hunting area. I’ve found enough loner bucks in them to make me a believer. (And I haven’t always missed.) Search for these somewhat innocuous-looking topography features on topos and satellite photos before heading out. Many of them are so slight, of course, that they may not show up on imagery. Boot work is vital.

Go to good early-season buck territory and walk ridge spines, knolls, and the edges of plateaus. There will often be major trails on the top, but you’re looking for a few light tracks heading down where small furrows finger off the higher terrain.

The best ones will have some vegetation for cover such as greenbrier, blackberry, raspberry, grapes, plum, and honeysuckle. Sumac and maple saplings add to the appeal. These mean the buck has seclusion and some available snack food.

Often a single mature buck will bed in this cover, near the top but down slightly in the fold. If the fold has a large deadfall or stump, he may bed snugged up beside that structure. He can look down below for approaching danger while using wind currents to monitor scent behind him.

Several tactics can work for folds. One technique is to try to bump the buck toward a friend or two positioned at the routes the deer likely uses when he bails out. Cover and wind direction will dictate where they should set up. Look for escape trails, strips of dense vegetation, or low ditches downwind or crosswind.

Another tactic is to pinpoint a fold with a buck and stake out the travel corridor he likely uses in late afternoon. Typically he’ll work down the fold toward major evening feed ­areas. If the wind is wrong, though, he may slip up on top of the knoll or ridge and take a different route.

Wait until the breeze is perfect for him to work down from the fold without scenting you and set up. If you can get to the fold quietly before daylight (usually a tough proposition), a morning ambush may also be possible.
Finally, if you’re a good stalker and can shoot 40 to 50 yards, try working across the tops of folds into or across the wind. Ease up cautiously and glass each fold to see whether a buck is at home.

As the weather turns bitter later in the season, folds offer deer some protection from cold winds. As the rut approaches and hunting pressure builds in their normal gentler habitat, does often head to these neglected terrain features, too. That adds another element of attraction. Finally, after breeding is complete, mature bucks want nothing more than a secluded spot to hole up in and nurse their battle wounds. Folds fit the bill—and often help fill the tag.