Why You Should Head North to Hunt Sandhill Cranes 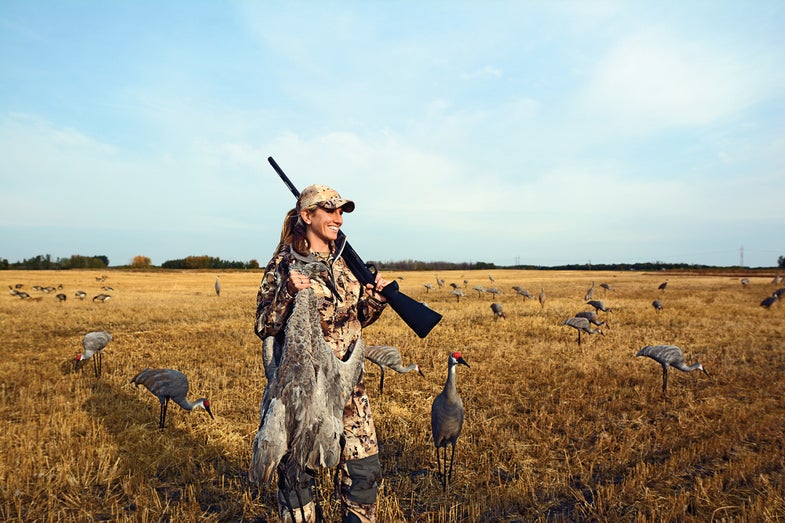 Crane Wreck: Among the decoy spread, a hunter shows off a ­sandhill crane.. Jim Saubier
SHARE

Across the field, Max Coch­ran spots a flock of sandhill cranes curving toward the blind and waves us down frantically, as if the whole hunt hinges on this pass. He begins to call—a patient, rolling purr. The flock flickers past overhead, cants, circles once more, then descends all at once. Eight cranes dive straight toward the decoys. The birds are deceptively agile, given their size, and I quickly realize that dropping one won’t be simple. The cranes are just 15 feet above the ground, but we wait for our signal. At last, when the birds are right over the decoys, a guide screams: “Make a pile!”

We spring up from the blind, and shotgun blasts jolt the flock backward. Two cranes crumple fast in a mess of feathers, and the rest scramble toward open sky, squalling. Instead of rushing a shot, as I tend to, I pause a beat and take stock of what’s unfolding: A bird in front has managed to evade the initial shots, so I shoulder my 12-gauge. The crane is high now and gaining speed; I lift the barrel far above it and fire. The bird hits the ground with a thud. My first sandhill.

Once the last crane slips out of range, Cochran’s Lab, Cam, runs from the blind to collect the downed birds. Sometimes on hunts, high fives and cheers can feel obligatory after a good pass, but our victory whoops come straight from the gut.

It’s mid September in Saskatchewan, and the sandhills have abandoned their northern breeding grounds to migrate south—which is why I traveled north. For the next three days, our group of seven shooters will hunt one of waterfowling’s most prized trophies in this fabled hunting destination.

We seem to have timed the migration just right, because less than 20 minutes after that first flock, another group materializes across the field. Two dozen decoys are scattered before our A-frame blind, and the cranes are fixed to the setup. “All right,” Cochran says, “ready?” He doesn’t wait for a response. “Go!” I rise and fold a crane so neatly that I surprise myself; the other hunters down three birds in the same fashion. No sooner does Cam collect the cranes than it’s time to go again. The hunting continues like this until we’ve all filled our five-bird limits by late morning. Each crane is about 4 feet long and weighs more than a Christmas ham. When we gather all of the birds for a photo, it is most definitely a pile.

Back at the lodge for lunch, Paul Wait, another hunter in our group, drops a few crane breasts into a slow cooker with a can of cream of onion soup. The lodge cook scoffs at him jokingly, saying that cranes make for dreadful eating, but Wait knows better. “Just wait until dinner,” he says. “Then we’ll see which dish goes first.”

Even to those who live in Saskatchewan, like the lodge crew, crane hunting remains a relatively new pursuit. By the early 20th century, poor management practices and agricultural demands had rendered sandhills nearly extinct, and hunting them was banned in 1918. Following extensive conservation efforts, however, their population began to rebound by the early 1960s, and over the next decade or so, Midwestern states and Canadian provinces began reinstating sandhill seasons. Saskatchewan reintroduced crane hunting in 1964, and since then, an increasing number of hunters have traveled to target the birds in this prime locale.

In the afternoon, we hunt ducks. I’ve killed my share of ducks before and was looking forward to a familiar hunt—but the mallards are supercharged compared with the cranes. They whip over the blind like stray bottle rockets. It takes us all a while to adjust, but even on what proves to be a slow afternoon, we still kill plenty. As we near our limits, “make a pile” starts to become our battle cry of sorts. Each time a flock appears, at least one of us chants it as we go for cover. Make a pile, boys! Unlike most camp jokes, this one never gets old—no matter how many times we say it. Because in Saskatchewan, we’re learning, there’s always a very real chance that we’ll do just that.

The smell of the crane bubbling in the pot greets us back at the lodge. Neither Wait nor I bother rinsing off the day’s grime before gathering around the slow cooker. He offers me a spoonful. The crane is some of the most tender and delicious wild game I’ve ever eaten, and Wait can tell right away. “I told you,” he says. “That rib-eye-of-the-sky thing is no exaggeration.” I’m not sure why I ever doubted him. He was right about the crane being the first dish to be gone.

In the morning, the action is even more consistent than it was yesterday. The cranes are upon us as soon as dawn spills over the horizon. Several flocks spook and peel away, but the sheer volume of birds keeps us in an almost constant state of readiness. Pile by pile, nearly everyone kills a limit—not to mention a limit of ducks later in the day.

On our last morning, I am sore and exhausted. I could go home completely satisfied, yet, sitting in the darkened blind, listening for cranes to call, I’m anxious for the action to begin again. I’m determined to kill a few final cranes. By the time the sun crawls above the distant trees, a flock is already circling the spread. The birds wheel above us, easing within range, until they commit and swoop toward the decoys. We stay crouched in the blind, holding out for the simple, three-word order: Make a pile.

Sandhills are notoriously distrustful and have exceptionally good eyesight, so they’ll seldom allow you a close shot. I used a Benelli Super Black Eagle II, which fires big 31⁄2-inch shells, to ensure I could cleanly dispatch the birds at a distance. It’s easy to cripple the big birds, so stay away from light loads. —J.R.S.

This article appears in the October 2016 issue with the headline “Pile Drivers.”