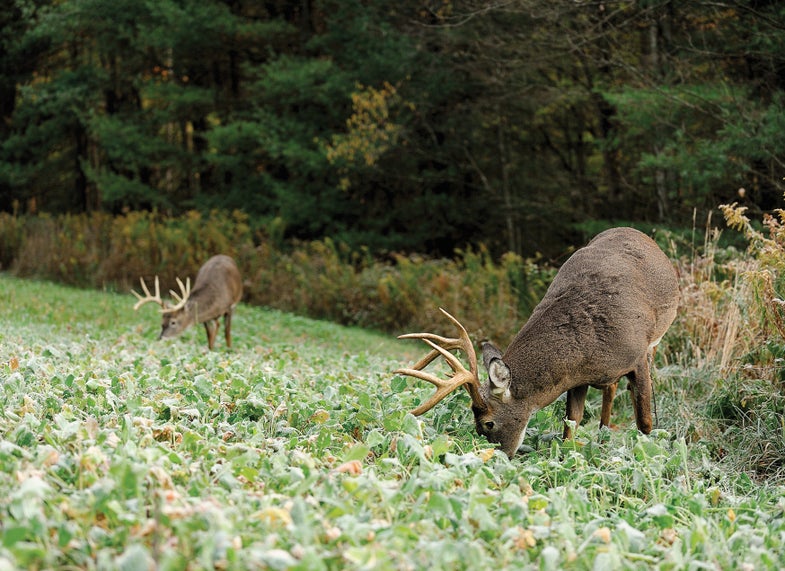 Both whitetails and hunters face drastic changes with the first frosts of autumn. Foods that drew deer consistently in September suddenly lack appeal; others that were ignored become magnets for big bucks. The hunter who stays in sync with these changes and adapts his strategy for this frost effect will be ahead of the game and will not be watching yesterday’s food source.

The changes may not coincide exactly with the first frost. But they’ll be close enough that this is a practical demarking line for when to switch your strategy and get on the hottest current food that’s drawing in deer. Here are seven food-source changes that occur as frosts arrive:

Soybean fields make great ambush sites during September. But when dwindling daylight and chilling temperatures turn their leaves yellow, deer will vanish. These will be hot locations again about a month later, when the fat-rich beans ripen. But for now, they’re scorned for more appealing fare, such as…

When I left for a two-day hunt recently, a plot of Winter-Greens near my house was 2 feet tall but barely touched by deer. When I returned following a cold snap, the brassica plot was nearly obliterated. It looked as if a tornado had struck. Luckily, a few stragglers were still feeding in it, including a nice 10-point that I punched my tag on. The change? A sharp frost while I was gone.

Deer managers were perplexed by these food-plot offerings when they first came out—until they learned how they became magic after a hard frost. On some properties, deer will eat brassicas all summer. But they’re most attractive when low temperatures convert the plant’s starches into sugars, enhancing their taste appeal and energy value. Look for the hottest action on kale, rape, turnip, and radish immediately after the first frosts strike.

Sneaking through an unpicked cornfield, peering down one row and then the next, is fun and productive in September. Corn holds maximum levels of nutrients, carbohydrates, and moisture then, and the stalks make perfect, well, stalking cover. But once corn is cut, often around the first frosts, in many areas only does and young bucks will venture into open stubble fields to scavenge leftovers. These spots will be hot again later as winter looms and bucks become more desperate. But you may want to avoid them if you’re after a mature animal now, because some older bucks are reluctant to show themselves here.

Falling acorns will draw bucks away from the best food plots and ag fields. Late September is a particularly hot time for hunting acorn-littered flats, but deer can quickly devour the nuts.
Don’t give up entirely on hunting oak mast, though. While the majority of acorns may be gone, a few species drop later, often following sharp frosts. These include scarlet, cherrybark, Nuttall, overcup, and Shumard oaks. Draw a map and mark where these late-dropping trees are so you can hunt them when ­early-​­maturing acorns are cleaned out.

Plums and peaches typically drop their fruit too early for hunting. But late-maturing species of apples and pears offer a high-energy food source for bucks facing the rigors of the rut. Home in on late-maturing varieties of apples (Honeycrisp, Gold Rush, York, Black Twig, Arkansas Black) and pears (Trophy, Galloway, Big Mamma).

When tree leaves fall in autumn, they provide a plentiful food supply for deer that was previously out of reach. Hunt over them quickly, though. Fallen leaves will soon dry out and become unappealing. Whitetails seem particularly fond of black gum, ash, redbud, and maple leaves, and a fresh fall might turn a cold stand hot.

Both of these perennials thrive in cool, frosty weather. Deer that ignored the dry, struggling plants in hot weather will flock to them now, especially a week or two after the year’s last cutting, when tender new leaves emerge.