What's it like to turn your back on civilization? One man bet his life to find out. 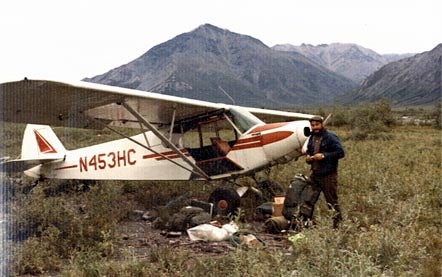 Adapted from The Final Frontiersman, Copyright 2004 by James Campbell, out this month from Atria Books/Simon & Schuster

Imagine it: New York City to Philadelphia; Chicago to Milwaukee; Los Angeles to San Diego-and not a soul in between. The nearest road is the Steese Highway, 250 miles away, on the south side of the White Mountains. The nearest hospital is in Fairbanks, 300 miles away.

Though people have traveled this land for perhaps as long as 10,000 years, few have done more than pass through. Prior to Heimo, there were maybe two or three other trappers who called this country home, and they lived lightly on the land. Before the trappers, small roving bands of Athabascan Indian subsistence hunters-members of the Gwich’in Nation, the “people of the caribou”-and coastal Inupiat Eskimos followed the movement of game through this wilderness.

They lived in caribou tents and pulled snow sleds loaded with their few possessions. Forced by weather and erratic game patterns to be perpetually on the move, they never lingered here for long. For the ancient Arctic hunters, life was both a joy and a struggle, plagued by the twin dangers of hunger and bitter cold.

John Peterson, the bush pilot who flew 20-year-old Heimo Korth out to his first cabin nearly three decades ago, shakes his head in disbelief and laughs now about Heimo’s determination. “He was in Alaska, and he was beside himself. I have a picture of him stepping off the plane. He was grinning from ear to ear. He had his Wisconsin beer weight on and he was pudgy, but, God, was he eager. He told me that he’d spent two miserable years being a factory guy, and he’d hated it. He told me he’d been drinking a lot. I offered him a radio, and he turned me down. He said, ¿¿¿No, I won’t have time for distractions.’ Then he said-get this-he said, ¿¿¿I’m gonna be a mountain man.’ I thought, This guy’s gotta be kidding. But then I could see that he was serious. Most guys that green don’t stand a chance. You know they’re going to die. But there was something about Heimo.”

**An Unfond Farewell **
It was in early August 1975 that Heimo Korth left Appleton, Wisconsin, for Alaska to seek what he’d come to believe was his destiny. He and his father, Erich, had had a ferocious argument one morning. Though Heimo can’t recall what the argument was about, he does remember how mad his father was. “The old man was pissed. God, was he pissed. But that wasn’t unusual. He was always ticked off about something. I was so happy to be getting away. I knew I wasn’t coming back.”

Irene Korth kissed and hugged her son, wished him luck, told him that she loved him and was proud of him, and dabbed at her tears with a tissue. She’d bought Heimo a round-trip ticket just in case something went wrong. Secretly she hoped that he’d have a change of heart. But Erich Korth wouldn’t budge. He sat on the couch, reading the paper, stewing in his anger, and didn’t so much as say good-bye. When Heimo left, his father wouldn’t even look at him. To hell with him, Heimo thought. I’m outta here.

**Cheechako **
By the end of September 1975, Heimo was set up in a cabin on Beaver Creek, 40 miles southwest of the village of Birch Creek and 70 miles south of Fort Yukon. Already his 6-foot 1-inch body had transformed to fit the country. In two short months he had dropped nearly 50 pounds from his Wisconsin high of 240.

But on Beaver Creek Heimo worried. Despite Peterson’s implicit vote of confidence, it didn’t take long for the reality of his situation to sink in-Heimo was alone, and Alaska was just so big.

“Can you imagine being dropped off in the middle of nowhere? I was a real cheechako,” Heimo admits, using the Alaskan euphemism for an unskilled, wet-behind-the-ears greenhorn. “I knew about being in the woods in Wisconsin, but this was Alaska. There wasn’t even a stovve in the cabin. There was supposed to be someone coming downriver with a stove, but because of freeze-up, he never made it as far as the cabin, and here I was looking at winter with temperatures of 50 below. I was real scared.”

Heimo was so frightened that he wrote an ill-advised letter to his parents, expressing his doubts about living in the bush. A few days later when a pilot brought in what meager food supplies Heimo was able to buy in Fort Yukon-mostly beans, macaroni, and white flour to augment the spruce and ruffed grouse and ducks he’d been eating-Heimo sent the letter out with him. “I wasn’t thinking,” Heimo says. “You can write a letter when you’re in that state of mind, but you should never send it. Later I learned that Mom called the state troopers. The troopers had no way of reaching me, so they contacted the pilot, who assured them that I was okay. Okay?” Heimo scoffs. “I wasn’t okay; I didn’t have a damn stove. I had to sleep outside and build bonfires to keep warm.”

Heimo had no luck shooting a bear or a moose either, and he had grown discouraged. The ducks had migrated through, leaving only grouse and rabbits, which he knew would never sustain him through the long, cold winter. So Heimo resolved to walk. He would hunt for 16 hours a day and keep warm at the same time.

Soon enough, however, Heimo’s worst fears were realized. By late September, a foot of snow had already fallen, and it kept coming, meaning that he was almost always breaking trail. And the temperature was tumbling. First 5 below, then 10 below. On October 1, Heimo woke up early, shivering in his sleeping bag, covered in a thin layer of frost. The sky was slate blue, and wind was barreling out of the north. Reluctantly, Heimo crawled out of his bag and walked over to the cabin where he had nailed a thermometer to a large white spruce. It read 15 below, and now Heimo knew for certain that he was in trouble. Resisting the temptation to panic required all the fortitude Heimo had. He slipped on his parka, canvas mukluks, wool gloves, hat, pants, and a backpack, in which he’d packed macaroni and bread enough to last him three days, and then set off upriver, determined not to return until he’d killed a black bear or a moose.

He was in the woods in back of the cabin, bound for a willow- and alder-choked gravel bar where he had seen moose tracks the previous week, when he discovered a collapsed cache that he hadn’t noticed before. Lying on the ground were a few rusted traps, a torn plastic tarp, a fur stretcher, and a lynx skull. Among the mess of rotting wood, he found a sheet metal woodstove and 15 feet of stovepipe. Twenty-seven years later, still astounded by his discovery, Heimo says, “I thought I was dreaming. I rubbed my eyes to make sure I wasn’t seeing things.”

Heimo carried the stove and the pipe back to the cabin and searched for wire to seal the stovepipe shut. Then he remembered that he had brought No. 2 picture wire to set rabbit snares. He wrapped it around the pipe, cut the wire, and twisted the ends tightly. Shoving the pipe up through the old stovepipe hole in the roof, he attached it to the sheet metal stove. He tore the pages out of a novel, crumpled them up, and threw them into the belly of the stove, and then he lit the paper and waited to see if the stove would draw. Running outside the cabin, he stood and watched, and his heart leapt when he saw smoke coming from the pipe. He had heat.