Five rivers where you can use a canoe to sneak up on a bruiser. 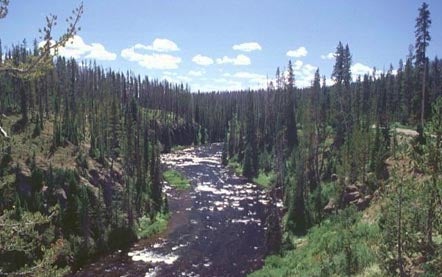 It was almost dark when Jim Henry stumbled into our tent camp all plastered with snow and his hat on crooked, but there was blood on his hands and he reeked of deer.

“Ten-pointer!” he crowed, with a big grin. “He’s in the canoe.” Jim had paddled a mile downstream from our tent camp on the Vermillion River in northeastern Minnesota and hunted in ankle-deep snow in a set of hardwood hills that lay beyond the river.

“It’s Deer City in there,” he said. “Trails are pounded into the snow like ruts. They’re pawing for acorns on the oak ridges, then bedding in spruce thickets in the swamps. I just slipped around in the shadows and watched.” Jim shot the buck once behind the shoulder at about 40 yards.

Once again, canoeing into the backcountry and hunting from a tent camp had paid off. Jim’s buck was another trophy added to a growing list of huge deer my friends and I have taken on canoe-camping trips in remote country from Maine to Montana. There are many easier and more comfortable ways to hunt deer, but the experience reaches its highest level of reward when you push yourself into deer country one paddle stroke at a time and depend on your own woodsmanship and hunting savvy. Sure it’s hard, but when you camp out for deer, everything you do-from loading up the boats to pitching camp to making Dutch oven biscuits-becomes part of the hunt. It’s total immersion hunting, and the outcome is sweeter because of the self-reliance, physical effort, and mental concentration required to successfully pull off such an adventure.

Here’s the inside information on three rivers where I’ve had memorable canoeing expeditions. The big-buck ratio is extra high in these places and hunting pressure is at a minimum.

**1 Allagash Waterway [BRACKET “Maine”] **
The Allagash Waterway, an 85-mile wilderness route connecting 11 large lakes and river sections surrounded by a mile-wide belt of protected forest, is classic North Woods country. With the first snows of autumn, thousands of deer leave their summer ranges in the outlying forests and head to the Allagash to seek shelter in the protected area’s mature spruce and fir. More than 100 deer per square mile congregate there, and the buck-to-doe ratio is nearly 1 to 1.

Look for the does feeding around the edges of swamps or pawing for beechnuts on higher ground; dominant bucks will be tending them by early November, and the waterway usually remains open for canoeing until the middle of the month. Archery season runs for most of October; firearm season, most of November. Contact: Maine Department of Inland Fisheries and Wildlife, 207-287-8000; www.state.me.us/ifw

[NEXT “Namekagon River”] **2 Namekagon River [BRACKET “Wisconsin”] **
Badger State hunters kill more than 300,000 deer a year during a nine-day firearm season at the end of November. Such heavy hunting pressure pushes the big bucks into the remotest areas of their range, where they are least accessible from roads but can often be reached by canoe. The Namekagon River (a northern tributary of the St. Croix National Scenic Riverway) in northwest Wisconsin is a great place to hunt those animals. It rises from headwaters in the Chequamegon National Forest and winds slowly through a wilderness of tall conifers, mixed hardwoods, and big swamps where the deer hide when all the shooting starts.

The National Park Service maintains public campsites all along the length of the Namekagon’s 98 miles, and hunting is permitted on most of the public land on the river. Pack in a portable tree stand and set up overlooking expanses of tall-grass swamp where the monster bucks seek daytime refuge. Archery season runs mid-September to mid-November; firearm season is usually the last nine days in November; muzzleloader is in early December.

3 Upper Missouri River [BRACKET “Montana”]
Lewis and Clark reported seeing more deer than they had ever seen before along the wide bends of the Upper Missouri Breaks, and this remote area is almost as rich in game today as it was when those explorers first laid eyes on it. On one trip there, my party launched at Robinson Bridge, north of Lewistown, and paddled upstream for 10 miles against a slow but steady current. We set up camp in the Missouri Breaks National Monument, where soaring, sculpted buttes overlook sandstone canyons, grassy flats, and brush-choked river bends. We glassed the canyons to look for muley bucks, and we found enormous whitetails in the brush beside the river.

Archery season begins in early September. Firearm season runs from late October through November, and canoe-camping weather usually extends through at least the first half of the season. Water conditions here are mostly serene, with no major rapids. Nevertheless, we paddled upstream to find a campsite so that we knew what lay downstream and could make a fast exit if the weather turned against us.

Go to fieldandstream.com for more great river deer hunts. [NEXT “Vermillion River”] 4. Vermillion River, Minnesota
This is where my hunting partner Jim Henry shot his 228-pound 10-pointer mentioned above. It’s a tough wilderness with a low deer density and more timber wolves than humans, but it’s where some of the state’s biggest bucks thrive. The Vermillion River runs north for 42 miles from Lake Vermillion to Crane Lake, passing from Superior National Forest to Kabetogama State Forest at the edge of Voyageurs National Park, and it’s part of an old canoe route that goes north all the way to Hudson Bay.

Jim Henry and I launched north of the town of Buyck, ran a series of rapids, and then pitched our tents in a river-bend campsite so trampled with deer tracks that it looked like a sheep pasture. But we almost got frozen in and had to end our trip early when a snowstorm and cold snap combined to choke the river-one of the perils of late-season canoe camping, to be sure, but also one of the main reasons there are so few hunters in these areas. Archery season usually opens in mid-September; firearm, the last three weeks of November; and muzzleloader, late November through early December.

5. Big Horn River, Wyoming
The boys with four-wheel-drives and horse trailers will tell you that all the trophy Wyoming bucks are up in the high country, but nobody told the deer that. The Big Horn River, in north-central Wyoming, meanders through vast grazing land where thousands of acres of alfalfa edge up to a wide floodplain filled with high grass, thick brush, and cottonwoods. An exceptionally dense population of muley does raise their fawns in this rich mix of cover and feed, and the dominant bucks are drawn down to the low country during the rut, where you can easily reach them from a canoe.

Private land along the Big Horn is interspersed with public sections where hunting and camping are permitted. Get one of the BLM maps of the area to pick your spot, and then launch at rights-of-way beside bridges to float into deer country. Once, when a group of us in four canoes navigated a 6-mile section near Greybull, we killed a half dozen nice bucks in just two days, and we never saw nor heard another hunter.