The War on Ticks

Battling one of nature's most nefarious critters. 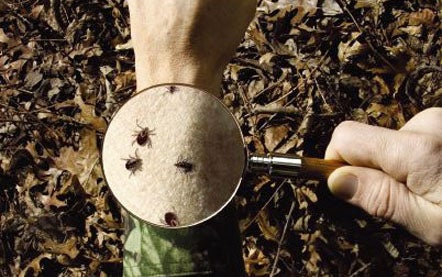 The Dutchess county, New york, whitetail looked magnificent in the distance, decidedly less so up close. As the hunter who killed it prepared to field dress the carcass, he noticed what appeared to be hundreds of black olives attached to its ears, head, neck, and shoulders. For each one of these things, he saw at least two smaller versions embedded in the deer’s hide.

“My friend gave up counting the black-legged ticks after he reached 1,000,” recalls David Weld, director of the American Lyme Disease Foundation. Not that this deer was particularly unusual: Throughout the late summer and fall, says Weld, the average deer in the Northeast hosts a revolving assortment of at least 350 to 500 Ixodes scapularis, a species notorious for its ability to transmit Lyme disease and other tick-borne illnesses. In the Midwest and South, other tick species target deer in even greater profusion. The lone star tick, for instance, can infest animals in the tens of thousands.

For those whose compassion is limited to human health concerns, know that the deer’s plight is increasingly tied to our own. Up to 60 percent of adult black-legged ticks carry B. burgdorferi bacteria, the type of spirochete that causes Lyme disease in humans and dogs alike. Though Lyme has garnered much of the media’s attention, it is by no means the only tick-borne ailment we are vulnerable to.

Worldwide, researchers have identified at least 30 serious tick maladies; in the United States alone, researchers at the Centers for Disease Control and Prevention currently keep surveillance on dozens of different tick species and a rogue’s gallery of illnesses they can carry. These include ehrlichiosis, babesiosis, Rocky Mountain spotted fever, tularemia, Masters disease, relapsing fever, southern tick-associated rash illness (STARI), and several others so newly discovered that they don’t yet have common names.

Given the far-ranging public health repercussions, researchers have tried attacking the tick problem in numerous ways. One of the most promising approaches has been vaccination, but this recently suffered a major setback. LYMErix, an FDA-approved vaccine for Lyme disease (but not for any of the numerous other tick-borne infections), was endorsed as safe and effective by both the CDC and the federal Advisory Committee on Immunization Practices. Unfortunately, as of 2002, the manufacturer pulled the product from the market, citing poor sales and adverse publicity by some individuals who claimed LYMErix made them sick. The incentive for future research remains uncertain. And so the best offense, it seems, is a good defense. Here are the latest guidelines.

Wear white. Light-colored clothing makes it much easier to spot ticks. Note: If you see one tick, know that many, many more are out and about.

**Use DEET. **It effectively repels ticks and other nettlesome arthropods. The American Academy of Pediatrics recently endorsed 30 percent DEET as safe for kids.

Apply permethrin to boots and pant legs. This potent insecticide will kill any ticks that attempt to attach. Permethrin lasts for several weeks, but it shouldn’t be used with DEET due to a chance of adverse chemical reactions.

Tuck your pants into your socks or boots. If a tick is going to grab hold of you, it’s likely to snag somewhere south of your waist. Do this only in conjunction with an insect repellent. Otherwise, says Weld, ticks will continue climbing until they reach the back of your neck or head, where they become very difficult to find.

Do frequent tick checks. Because ticks concealed in body hair can be especially hard to spot, lather up with soap in the shower and use your hands to feel for ticks.

**Forget the folklore. **Never attempt to burn a tick off with a match head, suffocate it with petroleum jelly or nail polish, etc. Such techniques,, while appealing to the revenge-minded, only agitate the tick, causing it to regurgitate. This is the last thing you want.

Use fine tweezers to remove attached ticks. Angle in parallel to the skin, grab the tick by its mouth parts, not its body, and gently but firmly pull it off. Disinfect the area with soap, water, and antibiotic cream.

Freeze the tick in a plastic bag labeled with the date you found it. This can help with diagnosis in the event you later come down with symptoms.

Early-stage Lyme disease can cause flulike symptoms and, in about 80 percent of the cases, a bull’s-eye rash. Other tick-borne diseases have their own identifying characteristics. Babesiosis, for example, is caused by a protozoan and can bring on symptoms similar to malaria. Check the excellent websites of the CDC (www.cdc.gov/ncidod/dvbid/lyme) and the American Lyme Disease Foundation (aldf.com) for more information on specific risks to watch for in your geographical area.

And take heart. Even if you develop late-stage Lyme disease, it remains treatable in the vast majority of cases, though this may require a lengthy course of intravenous antibiotics. “I’ve seen kids in wheelchairs who could hardly speak,” says Weld. “With proper treatment, in a year or so, they were back playing soccer.”