Are You Fit to Hunt?

If not, it's time to train like a mountain goat. 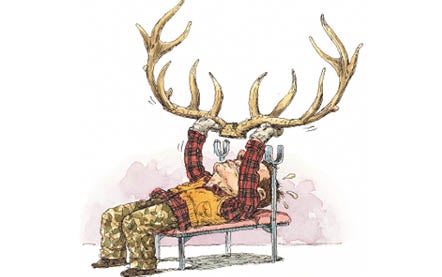 The 4O-something office worker from Arizona had been athletic in college, and he figured he still had enough of the right stuff to see him through his dream hunt-a weeklong elk adventure in Montana’s Bitterroot Mountains. During the first couple of days, he managed to keep going on adrenaline alone. But by day three, the Arizonan knew he’d had it. The altitude (6,500 feet and higher) left him gasping for oxygen. All the sustained clambering up and down steep inclines laden with hunting clothes and boots, a heavy pack, and a 7-pound rifle was exhausting. And the harsh conditions-the temperature in the Rockies can plummet from the 80s to the 20s in a few hours-wore him down. Plus, the mountainsides were mottled with snow-slick tufts of bear grass and strewn with dead timber. On the best of days, it was like mountain climbing over a wet obstacle course.

For the remainder of the trip, his guide would ride him up on horseback to a promising spot, set him there, and then climb up the canyon alone to try to push elk down into firing range. It didn’t work, and the Arizonan never got off a single shot.

The guide on that trip was Todd Earp (yes-he’s a descendant of that Earp), owner of White Mountain Outfitters in Corvallis, who’s led hunts for everything from bear to mountain lion for 13 years. Chasing elk up and down the Bitterroots, he says, requires a level of stamina and hardiness that’s hard to imagine until you’ve actually done it. For every client who signs up for one of these $4,000 to $5,000 expeditions, Earp makes an unequivocal recommendation: Get in the best shape of your life before you come.

Whether you’re planning a major expedition to track elk in the Rockies or you’re just stalking whitetails close to home, having a body hardened for the physical demands of the sport will not only add to your enjoyment-it will make you a better hunter. But besides target practice, how does a hunter train? Brian J. Sharkey, Ph.D., a former director of the University of Montana’s Human Performance Laboratory, works with the U.S. Forest Service on issues related to the health and safety of wilderness firefighters. In his bestseller Fitness & Health (Human Kinetics, $25), Sharkey provides a wealth of information on how to build the muscular endurance, strength, and balance needed by firefighters and hunters, both of whom depend on a virtually identical set of physical skills. This kind of training can be very effective, as the Arizonan proved to Earp one year later when he returned to the Bitterroots noticeably slimmed down and muscled up. On the fourth day of that hunt, they heard elk bugling on an adjacent ridge and had to scramble down a draw and then run to the top of the next canyon to catch up to the elk. “When we made it up he was soaked with sweat and his face was red,” says Earp. “But he took a couple deep breaths to steady himself and then fired off a shot.” The bull went down. “It was so cool to see all his hard work pay off in that one moment.” Here are a few recommendations from Sharkey and Earp to get you into shape:

**Ease into it **If you’re reading this in early August, and you know you’ll be hunting in late October, you’ve got less than three months to get in shape. Devote the first several weeks to general conditioning. Work up to walking a half hour at a decent clip five to six days a week. Climb stairs instead of taking the elevator, and look for any other opportunities to take the laziness out of your daily routine. Incorporate a regimen of general strength training two or three times a week, either with push-ups and sit-ups or circuit training at a gym. It’s critical to resist the urge to get too gung-ho at the outset, which is a recipe for soreness and injury. Start low and go slow, adding in approximately 10 percent more activity each week.

Get specific Peak performance in any sport requires training the specific muscles that come into play. A marathoner may be in superb shape for long-distance runs, but very little of his training makes him better at other sports like swimming. The lesson for hunters is obvious. “If you want to go out and carry a rifle and heavy pack while hiking up very steep terrain,” says Sharkey, “the only way to get ready to do that is to simulate it through your training.”

Build endurance “I tell guys to put on their hunting clothes, boots, backpack, and, if possible, to sling their rifle, too,” says Todd Earp. All this equipment is constrictive and dissipates less heat than jogging shorts and tennis shoes. Going for progressively longer hikes while fully attired will help get your body used to what the actual conditions will be like.

Solidify the core If you think you’re going to be dragging a deer or packing out an elk, you should consider weight training. This will build the basic leg and arm strength needed to prevent muscle pulls, and also train the “core” muscles like the trunk, back, and abdomen that are arguably even more critical for hunters. “In hunting,” explains Sharkey, “you’re likely to be twisting, slipping, and catching yourself.” Building core strength will allow you to better absorb these kinds of shocks and continue your hunt with less fatigue.

Refine your balance The mini-muscles that help stabilize you on rough and slippery inclines need to be trained in practice the way they’ll be used in the field. Head for some terrain where you can practice hiking diagonally up and down steep hillsides. Or you can simulate it on bleachers. The key is variation in your stride. “When you’re hiking in the wilderness,” Earp explains, “your strides are constantly changing. For instance, you may lift your left leg way up on one step, then your right leg takes a little step, then you reach another log or slippery tuft of bear grass, and everything shifts again.” As you move up and down the bleachers at different angles, constantly vary your footwork.

Shoot when you’re tired You may be a great shot when your breathing is calm and your heart is slow and steady, but this is usually not the case on a strenuous hunt. “You’ll see a bunch of elk at the top of the mountain, haul butt up there to get to them, but when you get there, they are just going over the crest,” says Earp. “You may have only one shot, and it’s likely to be an offhand shot to boot.” Add in the fact that your heart is jackhammering, your breath is gasping and ragged, and sweat is pouring down your face. To ensure that your aim is true when you need it most, go to the range, work up a sweat, and practice shooting like a hunter in the wild.