An innovative treatment for wilderness wounds. 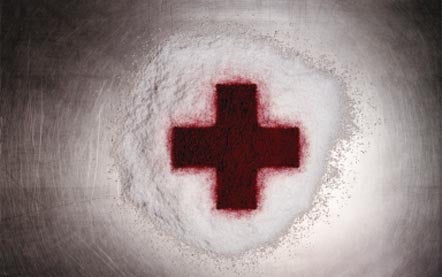 While field dressing an antelope carcass in Montana, the hunter accidentally plunged his knife into his leg, severing his femoral artery. He subsequently tried to claw his way back to camp, but the bleeding was heavy and unstoppable. By the time a park ranger found him, he lay dead on the ground, just another statistic among the estimated 100,000 Americans who die each year from blood loss.

That hunter’s tragic story is just one of many misadventures that Jessica Perkins, product manager for a new wound treatment called QuikClot, heard at this year’s SHOT Show in Las Vegas. Perkins proved a magnet for hunters who told her they wished they had known sooner about QuikClot, now being used on the battlefield by the U.S. military to treat massive hemorrhaging. She heard tales of accidental gunshot wounds and deep knife cuts, of favorite dogs that bled to death after being mauled by bears.

Although statistics indicate that hunting and fishing are actually very safe sports, with an accident profile much lower than, say, high school football, any time you place human beings with sharp objects and deadly weapons in a remote environment, the potential for tragedy exists. According to the National Safety Council, 716 hunters suffered nonfatal injuries in the field in 2001, the most recent year for which data is available, and 75 died of hunting-related injuries.

A Battle-Tested Lifesaver
With the advent of QuikClot, many such deaths may be preventable. QuikClot is not a drug, per se, but rather an FDA-approved medical “device.” It consists of a synthetically manufactured mineral known as zeolite, which occurs naturally within volcanic rock. Though chemically and biologically inert, powdered zeolite boasts amazing adsorptive properties. When correctly applied to a major arterial or venous “bleeder,” it leads to an extremely rapid separation of liquid from the blood, which, in turn, concentrates clotting and coagulation, slowing a hemorrhage with remarkable speed and effectiveness.

QuikClot’s efficacy has been proved in the crucible of the battlefield in Iraq. Lt. Jerome Taylor, a 29-year-old battalion surgeon with the U.S. Marine Corps, is one of many combat doctors that have used QuikClot to save lives. A case in point: After arriving last March in southern Iraq, Taylor encountered a 20-year-old soldier hit by a piece of shrapnel that had blown through his left shoulder, severing the axillary artery in his armpit before exiting the other side. By the time Taylor reached him, the soldier’s wound was soaking through rolls of gauze at the rate of one every three minutes. In a hospital Taylor could have surgically repaired the severed vessel in time to prevent the guy from bleeding out. That option wasn’t available. “When reinforcing the pressure dressing didn’t work,” says Taylor, “I decided to try QuikClot for the first time. I opened the package, warned him he might feel a little heat, then poured the powder into the entrance and exit wounds in a slow, wavelike fashion.”

In minutes, solid clots formed on both sides of the injury. Taylor then reapplied gauze bandages and watched to make sure no more blood started soaking through again. None did. “The QuikClot plugged the holes,” says Taylor, adding that they remained solidly in place until a surgeon removed them later and repaired the torn vessel. [NEXT “A Most Critical Skill”]

A Most Critical Skill
John Hagmann, M.D., serves as medical officer for the FBI’s Hostage Rescue Team. He recently helped evaluate QuikClot along with other novel hemostatic agents for military use. “Hemostasis, or hemorrhage control, is the most critical medical skill you can have when you’re far removed from a hospital setting,” he says. His conclusion: Though at least one other rival product, a high-tech medical bandage called HemCon, also works effectively, QuikClot’s simplicity gives it a significant advantage-it’s much easier to train field personnel in how to use it correctly.

“Don’t get me wrong-QuikClot is not pixie dust,” says Hagmann. “You do need to learn how to apply it correctly. The question about agents like this is not just whether they work, but whether responders in the field can learn to make them work.” And in the case of QuikClot, the answer appears to be a resounding yes.

Besides the U.S. military, QuikClot is being used by emergency first responders-fire departments, rescue units, and police forces-and sportsmen can now obtain the same basic trauma pack for about $50. “If the average hunter or fisherman out there becomes educated about its proper use,” says Taylor, “they should have no trouble stopping significant blood loss.”

To be sure, applying sufficient mechanical pressure to the wound can sometimes accomplish the same end. “But the problem with this approach,” says Hagmann, “is that eventually you’ve got to move the victim, and as soon as you move him, the bleeding will start again, so you’re stuck.” Victims whose blood loss is stopped by QuikClot may not be completely out of the woods, but they’ll have a better chance of getting there.