Revenge of the Carbs

Why protein diets won't fuel you through the hunt. 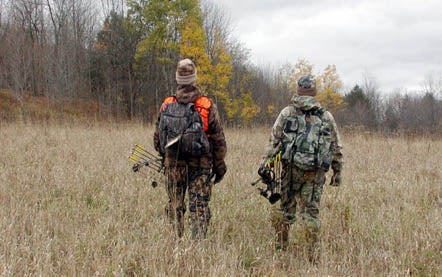 Montana hunting and fishing guide Sandy Sallee has witnessed plenty of dietary epiphanies in the wild. She has seen teenage girls who arrive as diehard vegetarians turn into ravenous meat-and-potato gluttons. She has observed guys who avoided cookies for years deciding, after several days of extreme exercise, to consume “maybe just one”-only to gobble down a dozen.

“Not only are these guys thrilled to death by the chance to eat carbohydrates again,” says Sallee, co-owner of Black Mountain Outfitters in Emigrant, Montana, “but they’re shocked to find they aren’t gaining weight. They leave here fitter and more buff than when they arrived.”

According to a 2004 ACNielsen poll, nearly one in every nine American men now follow a low-carbohydrate diet such as the Atkins or South Beach plan, hoping to shed pounds by switching from starch to steak. The jury is still out on both the effectiveness and long-term health consequences of such a shift, but one thing’s for certain: Avoiding carbs is the last thing a hunter should be doing in the field.

“If you’re working a desk job in the city, you can get away with the Atkins diet or other fad approaches that limit carbs,” says Sallee. “But when you’re out here in the mountains going hard every day, your body needs fuel, and if it runs out of carbs, you’re going to crash.”

The practical dietary lessons Sallee has seen borne out time and again in the high country of Montana have been well documented by nutritionists, who maintain that active people practicing Atkins and similar “carbs are the enemy” approaches typically see their stamina and performance plummet.

The reason is simple, says nutritionist Suzanne Girard Eberle, M.S., R.D., author of Endurance Sports Nutrition. Any time you exercise hard enough that it becomes difficult to carry on a conversation-as when you’re climbing a ridge or pushing hard through heavy cover-your body is predominantly burning carbohydrates for fuel. “If you don’t have enough carbohydrates in your system,” she says, “you’ll be forced to slow down. Eventually, you’ll ¿¿¿bonk’-what marathoners call ¿¿¿hitting the wall.’ For hunters way out in the wilds, this can definitely be dangerous. Say you’re five hours away from the car. Are your buddies going to carry you back?”

[NEXT “How Carbs Work”] **How Carbs Work **
To better understand why a low-carb approach can be so counterproductive, consider the three major food compounds: carbohydrates, fat, and protein. All three are important, but only the first two enter into the serious fueling of the muscular contractions that keep us going during strenuous activity.

Protein is the major functional and structural component of your body’s cells, and as such it plays a critical role in building and repairing everything from muscles to hormones to immune cells. Protein, however, is not a significant energy source. In fact, it typically contributes no more than 5 percent of our energy needs. The clear lesson here: Man may live on lean steak alone, but he’s not going to be able to sustain strenuous activity on such a diet.

This leaves fat and carbs as the main forms of “human gasoline.” The better shape you’re in, the more your body can use fat to fuel muscle contractions. Our muscles actually store fat expressly for this purpose-think of the marbling in beef. But unless you’re in peak condition, fat burning doesn’t kick in for at least an hour after you start exercising.

Carbohydrates-from refined sugar to more complex forms found in whole grains, brown rice, and lentils-are broken down by the digestive process into glucose and other simple sugar molecules. Some remain in circulation in the bloodstream, where they are tapped directly by the brain, nerves, and skeletal muscles for fuel. Any excess is saved for future use in a special storage form called glycogen.

Under ideal conditions, the body cantore enough glycogen to provide approximately 1,200 calories, or enough to fuel a 10-mile run or several hours of stalking elk at elevation. This assumes you’re taking in enough carbs-something some men are failing to do.

“I find myself repeatedly begging sports-active people to eat carbs if they want to enjoy optimal performance,” says Nancy Clark, M.S., R.D., author of Nancy Clark’s Sports Nutrition Guidebook. “Carbs are the only things that get stored in the muscles as glycogen.” And once muscle glycogen stores become depleted, she adds, the result is premature and unnecessary fatigue. [NEXT “Eating for Endurance”]

Eating for Endurance
If you’re planning a hunting or fishing trip that’s likely to be demanding, experts recommend you start eating for success today. “If you give this approach a fair trial,” says nutritionist Suzanne Girard Eberle, “it can make an incredible difference. I’ve had people tell me the days just flew by-they never got tired.” These 10 tips will help you eat in a way that increases your endurance so you don’t “bonk” during the hunt. -J.T.

1. Eat like an athlete. In the weeks and months leading up to hunting season, embrace the performance approach proven to work for athletes. This means about 60 percent of your calories should come from carbohydrates, 25 percent from fat, and 15 percent from protein.

2. Think complex carbs. Simple sugars are not health demons, but they lack the vitamins and nutrients found in more complex carbohydrates such as fruits, vegetables, brown rice, and beans. The latter also take longer to digest, preventing rapid fluctuations of blood sugar levels and keeping you on a more even keel.

3. Veg out. Put more fruits and vegetables into your system. Drinks count: Try swigging down a couple of glasses of orange or tomato juice. You can also add veggies to your meals-extra sauce on a pizza, for instance, along with some zucchini or green peppers instead of pepperoni.

4. Replenish carbs quickly. For about an hour after hard exercise, your body produces an enzyme that enhances the storage of glycogen in muscles, so it’s best to eat some carbs during this golden opportunity. Taking in a little protein at this time, too, has been shown to help consolidate the benefits of strength training.

5. Rest up. About four days before your hunt, stop any vigorous training and let your muscles rest and repair themselves. Elite athletes use this time to “carbo-load” as well-meaning they jam-pack excess glycogen stores into their muscles by eating a high percentage of carbohydrates.

6. Eat early. Breakfast is critical for a host of reasons, one of which is replenishing liver glycogen stores that have been tapped by your brain overnight. An ideal breakfast includes complex carbs like oatmeal, multigrain pancakes, or whole-wheat toast, plus some lean protein (eggs, Canadian bacon, yogurt) and a modest amount of fat. Protein and fat take longer to digest and will provide a steady influx of nutrients for sustained performance.

** 7. Catch a buzz.** Caffeine has been shown in numerous studies to have an ergogenic-or sports-enhancing-effect in endurance athletes, most likely by reducing “perceived exertion” during exercise. For regular users, there’s another reason to have your morning ration: If you skip this, you might suffer withdrawal symptoms that range from lethargy to headaches.

8. Nosh on the go. Take an easily accessible source of carbs with you. Sports drinks, gels, and energy bars can all help keep blood glucose levels steady and prevent “bonking,” but so do more palatable snacks like trail mix, granola bars, and peanut butter sandwiches.

** 9. Reward yourself.** Particularly if you’re venturing forth into cold weather, high altitudes, or other grueling conditions, you may find a well-timed dietary treat like a candy bar provides not only the energy your body craves but also a real psychological boost.

**10. Banish food guilt. **”Most guys can easily consume 3,000 to 4,000 calories a day on one of our hunts and not gain weight,” says outfitter Sallee. “In fact, their bodies typically get harder in the process.” She believes that the best nutritional advice of all comes not from diet books or scientific studies but instead from listening closely to what your body tells you it needs. “When you’re out in the wilderness and working hard,” she concludes, “it’s so much quieter and you can pay attention to these messages.”ll-timed dietary treat like a candy bar provides not only the energy your body craves but also a real psychological boost.

**10. Banish food guilt. **”Most guys can easily consume 3,000 to 4,000 calories a day on one of our hunts and not gain weight,” says outfitter Sallee. “In fact, their bodies typically get harder in the process.” She believes that the best nutritional advice of all comes not from diet books or scientific studies but instead from listening closely to what your body tells you it needs. “When you’re out in the wilderness and working hard,” she concludes, “it’s so much quieter and you can pay attention to these messages.”