Why sportsmen fall to heat exhaustion. 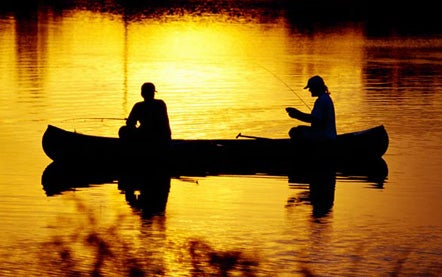 John Kirwin, a paramedic in Grand Isle, Louisiana, got the call from the U.S. Coast Guard at 10:15 on a sweltering summer morning. A boat captain was racing a sick tuna fisherman back to shore. The victim, a 42-year-old attorney from Baton Rouge, was suffering from some form of heat illness. He’d vomited twice and was slipping in and out of consciousness.

The heat index that day was already hovering near 105 degrees. By the time Kirwin and his team met the boat at the marina, the victim was conscious but was suffering such severe leg cramps that he couldn’t stand. The paramedics took him by stretcher to the air-conditioned ambulance, and Kirwin began checking his vital signs on the way to the closest emergency room. The man’s breathing was fast and shallow. He was pale, sweating profusely, and his body temperature was 99.2. With the patient lying flat on his back, his feet slightly elevated, Kirwin did an EKG, then placed bags of ice under the victim’s arms and groin and started two IV lines to pump in fluids and electrolytes.

Out trolling with his buddies since early that morning, the fisherman had neglected to drink water to replace the fluids lost by sweat. He then hooked a large tuna and exhausted himself fighting it. His symptoms began with a sudden onset of weakness and a bad headache, followed by vomiting and leg cramps.

The ER doctor would later tell Kirwin that if the patient had spent another hour or two in the heat, he could have died.

Two days later, the fully recovered attorney returned to Grand Isle to thank Kirwin. “He brought me a couple of tuna steaks,” Kirwin says. “He said, Â¿Â¿Â¿This is for saving my life.'”

Mercury Rising
The name for what ailed Kirwin’s patient is heat exhaustion. “The main symptom is that you just can’t sustain the activity you’re doing,” explains Howard Backer, M.D., past president of the Wilderness Medical Society and an expert on environmental heat illnesses. “In this regard, heat exhaustion is a healthy adaptation. It forces you to stop before you get yourself into even worse trouble.”

Worse trouble means heatstroke, which can be lethal. Even victims who receive timely treatment die in up to a third of cases, and 17 percent of survivors suffer neurologic damage.

[NEXT “Story continued here…”] “Heatstroke,” says Backer, “is on the far end of a spectrum that usually starts out as heat exhaustion. What’s a mystery, however, is the triggering event that tips a person over to the point where adaptive temperature regulation fails.” In the direst cases, body temperatures have been known to soar as high as 108 degrees in minutes. This leads to a metabolic cascade of events that can cause liver and kidney failure, simultaneously denaturing the protein in your brain like egg whites in a hot skillet.

The body is not without its defenses. When the brain detects a dramatically rising body temperature, it triggers processes that transfer heat away from the core by pumping blood to the skin where the heat can radiate away, abetted by the evaporation of sweat.

Unfortunately, many factors can impair this natural mechanism for heat dissipation. Alcohol (Kirwin found out that his patient had been drinking) and certain prescription medications impair the body’s capacity to regulate temperature. The same holds true for circulatory problems, from heart disease to high blood pressure, excess body fat, and aging.

Stay Out of Trouble
Heatstroke is virtually always avoidable if you’re smart. Here are a few tips from the experts:

See the doctor. If you have special risks, including obesity, heart problems, medical restrictions on your fluid intake, a low-salt diet, or prescription drug usage, or if you are over 65, talk with your physician before you go out.

Get in shape and acclimate. Almost all of us can improve our ability to toolerate high temperatures by acclimating to the heat. But just sitting in a sauna won’t do it. You have to actually exercise for an hour a day in the heat for five to 10 days in order to improve your tolerance.

** Take cover. **Wear a wide-brimmed hat and light-colored, loose, breathable clothing, and try to stay in the shade as much as possible. Also limit outdoor exercise on hot days to the morning and evening hours.

[NEXT “Story continued here…”] ** Stay hydrated.** Drink nonalcoholic beverages, like water and sports drinks. Beer doesn’t count because alcohol dehydrates your system and interferes with heat regulation. (Kirwin says that he frequently responds to calls involving fishermen who drink beer on a hot day and don’t understand why they end up dehydrated.) Excessive water drinking, however, can sometimes cause the body to flush out too much sodium, leading to a potentially fatal condition called hyponatremia. Your best bet is to drink enough water to stay a little ahead of your thirst and supplement it with salty snacks.

Buddy up. Heat illness can cause confusion and loss of consciousness. Keep an eye on your buddy, and have him do the same for you.

** Don’t downplay symptoms.** If you start feeling sick in the heat, stop exercising and head for the shade or air-conditioning. Drink water, eat a salty snack, and take it easy. If you see someone collapse in the heat, summon paramedics.

Watch your best friend. Dogs are more vulnerable to heatstroke than humans, due to their coats and inability to sweat. In the fall of 2003, an estimated 100 hunting dogs died in South Dakota when pheasant season coincided with an autumn heat wave. “Most guys are very conscious of their dogs’ health now,” says David Smith, a dove-hunting outfitter and owner of Texas Wild. “Many of them won’t bring a dog on a hot day. When they do, they bring a dish and plenty of water. If only they’d take as good care of themselves as they do of their dogs.”