A controversy over cloned deer erupts in Texas. 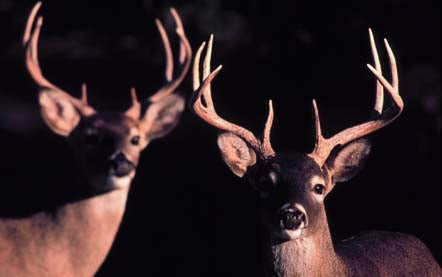 Brutus, a 6-month-old spindly-legged whitetail with two nubs already rising on his forehead, is roaming with five other fawns around several high-fenced acres protected from the outside world by black shade cloth. He and his pals are one of several herds confined to pens scattered around the grounds of Revolution Whitetails, a scientific deer-breeding ranch located 30 miles east of Dallas. Brutus has a dewy-eyed innocence that isn’t surprising considering that he’s been bottle-fed and pampered by Dr. Tim Holt, an equine veterinarian who owns the ranch. That also explains the animal’s fearlessness as he approaches Holt, whose familiar white pickup and lean frame adorned in a blue veterinarian’s scrub shirt and Wranglers usually signal feeding time.

Brutus and the other whitetails grazing around this idyllic woodland prairie are clones-living, breathing examples of a new and controversial chapter in wildlife science. Depending on which side of the philosophical fence one stands, cloned whitetail deer are either the latest innovation in breeding technology-pushing the envelope of antler sizes-or they’re Frankendeer-scary examples of the domestication of game into livestock and the ultimate insult to fair-chase ethics.

Revolution Whitetails is the first and only private enterprise licensed by the state of Texas to clone deer for commercial gain. The company holds the patent on the process, which is based on research conducted by one of Holt’s partners, Mark Westhusin, an associate professor at Texas A&M;’s College of Veterinary Medicine, where Dewey, the world’s first whitetail clone, came into being in November 2003. Brutus and about 30 other deer were conceived by replicating fibroblast cells (the basic building blocks of connective tissue) taken from skin samples of bucks with superior genes and implanting that DNA into a host doe’s ovaries. The procedure is complex and expensive-about $75,000 to $100,000 per clone. Still, Brutus looks the same, flicks his tail the same, and acts the same as his counterparts in the wild.

The idea of cloning wild animals upsets many people, but Holt doesn’t think it’s such a big deal when viewed in the context of animal husbandry. “The Texas Deer Association [BRACKET “which represents about 600 breeding-permit holders”] was totally against cloning when they first heard about us,” Holt says. “They formed an ethics committee to discuss if they were going to allow me to do it. Now they’ve changed their position. All it takes is for one of their big bucks to have an untimely death, because we can preserve those qualities through DNA and re-create the animal.”

[NEXT “Continued…”] Still, he understands some of the initial reactions, which he believes were based on a lack of knowledge about how the science of cloning works. “People were against artificial insemination when it first started,” he says. “But we’re not in the experimental phase anymore. We’ve done it. We’re in the commercial phase now, which makes people nervous because I’ve got the best genetics in the state.” And when it comes to trophy whitetails, genetics are everything.

Big Bucks
Plenty of hunters are willing to pay serious money for a chance at supersize whitetail bucks, and that excessive trophy lust fuels the economics of cloning and, for some, its rationale. Look no further than the $450,000 a syndicate paid for Dreambuck, a scientifically bred whitetail that may be the biggest deer in Texas, with antlers measuring 3013/8 inches. Sales of its semen, which will be used to breed more giant bucks, have already paid off handsomely for investors. Bigger deer mean more money for landowners, outfitters, and retailers associated with a state hunting economy that is the nation’s wealthiest, a $3.6 billion industry. So why not clone deer? It’s not illegal. Yet.

Bob Brown, Ph.D., the head of Texas A&M;’s Department of Wildlife and Fisheries Science and vice prident of the Wildlife Society, views cloning as unnatural. “I don’t think my faculty could’ve been more upset if they’d cloned a human,” Brown says. “I haven’t talked to anyone who wasn’t appalled that wildlife is being treated as livestock. They’re catching does and inseminating them with semen.” The result, he says, is “a cloned animal that has been bred and fed and conditioned to come to the feeder. That’s not wildlife.”

Gene Riser, a Texas A&M; alumnus who runs a scientific breeding operation on his ranch in the South Texas Brush Country and is a founding member of the Texas Deer Association, agrees with Brown that artificially bred deer are the same as livestock, but he argues that deer produced in such breeding operations are privately owned herds that belong to the landowner. He contends that since these animals are not the property of the people of Texas, as all wildlife in the state is designated, the landowner can do anything he wishes to do with them. Riser doesn’t mince words when it comes to the broader implications of cloning.

“I don’t give a s— about fair chase,” he says. “When I go hunting, I want to kill something. We all have different attitudes-how we go about the hunt and how complicated we make it. Some want to make it hard and use muzzleloaders or bows. As far as making rules for other people about fair chase-oh, come on.”

[NEXT “Continued…”] On the other side of the debate, the Texas Wildlife Association, which represents private landowners, is so adamant about the negative effects of cloning whitetails that it is lobbying the Texas Legislature to prohibit any cloning of wildlife except in cases involving endangered species.

“I worry that we’re moving toward buying shrink-wrapped antlers from Sammy the Superdeer at the Wal-Mart,” says the organization’s executive vice president, Kirby Brown. His predecessor, David K. Langford, who is a seventh-generation Texas rancher and deer hunter, takes a wider view: “The more that artificiality is introduced to hunting, the more the experience is diminished. It’s not much of a leap from cloning to just forgetting all about the heritage of hunting.” Both men fear that the process will generate an anti-hunting backlash.

That kind of skepticism prompted Boone and Crockett officials to put cloned deer in the same category as pen-raised deer-unfit for trophy status.

“Cloning is a step too far,” says Jack Ward Thomas, the Boone and Crockett Professor of Wildlife Conservation at the University of Montana. “A trophy is a symbol, a memory of something achieved. Here’s an animal that’s lived long enough and survived long enough to be a trophy. B&C; started the scoring system to honor the trophy. Where’s the honor when you’ve manipulated the genetics, diet, and age?” Thomas, a director emeritus of the U.S. Forest Service, understands that not everyone lives by that code. “Texas is a whole other place,” he says. “It’s an entirely different culture with a different attitude toward hunting and wildlife.” He should know: He’s also a Texas A&M; graduate.

[NEXT “Continued…”] Stacking the Gene Pool
The discovery of a sick and dying trophy buck last November on the grounds of Camp Bullis, a U.S. military reservation near San Antonio, has added an element of intrigue to the cloning saga. That monster buck had antlers measuring 2713/8 B&C; points, which is the third highest ever seen in Texas. A skin sample was obtained and forwarded to Revolution Whitetails, where its genetic material has been stored.

“I have samples of genetics of the best deer in Texas,” Holt says. “I feel like the next world-record deer is going to be taken. The sights have been lifted so high that we’re shooting for a 300-point deer. If I’m able to provide people the opportunity to shoot a big buck, then that keeps the economy going. Next year we want to raise public awareness about what to do when a large animal is harvested.”

Holt believes cloning whitetails is just another chapter in the ongoing evolution of animal domestication. “Horses, cattle, and dogs were all wild at one time,” he says. “We’re not doing anything different that hasn’t been done to other species.” Those other species, of course, are not game animals.

Perhaps the day isn’t far off when mounted heads will bear tags identifying them as wild or farm-raised, much like organic products and wild seafood are labeled in supermarkets. Whatever the implications of cloning might be, the revolution has already started in Texas. Its impact on hunters and hunting remains to be seen. e animal is harvested.”

Holt believes cloning whitetails is just another chapter in the ongoing evolution of animal domestication. “Horses, cattle, and dogs were all wild at one time,” he says. “We’re not doing anything different that hasn’t been done to other species.” Those other species, of course, are not game animals.

Perhaps the day isn’t far off when mounted heads will bear tags identifying them as wild or farm-raised, much like organic products and wild seafood are labeled in supermarkets. Whatever the implications of cloning might be, the revolution has already started in Texas. Its impact on hunters and hunting remains to be seen.