These Alaskan and Canadian waters can't be beat for giant pike. 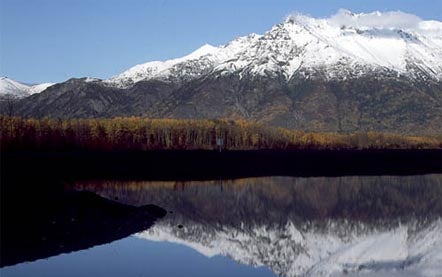 The scene was one of the most stunning sights I’ve witnessed in 50 years of fishing: several dozen giant pike on a dawn feeding binge. The huge wakes and boils 4 feet and more in diameter were easy to see in the early light of extreme northern Manitoba. Our fingers trembled as we struggled to tie on lures. We finally took some fish-43 inches was the best, but we saw much bigger-until the sun hit the water, and the monsters disappeared.

Pike, especially big ones, are like that. When a 20- or 30-pounder appears from nowhere behind your lure, the adrenaline kick is extraordinary. This might be as much in fear as anticipation. In a mythology that extends back through the Middle Ages, pike are symbolic of mystery, baleful power, and death. Even the name pike derives from a medieval killing tool, one that was commonly used for displaying a severed human head.

Small pike, the so-called hammer handles up to 26 inches or so, are common across much of the northern United States. For most of us, finding giants of 40 to 50 or more inches calls for travel. Although there are big pike in the Lower 48 (see sidebar on page 100), the overall numbers of record-class pike are incredibly small. You have much better odds of winning the state lottery than of catching a state-record pike.

The biggest pike are most common to northern areas that are remote and lightly fished, which means far northern Canada and Alaska.

** Pike Picks**
While I hear occasional rumors of monster pike from interior Labrador, right now there are two hot zones for giants: extreme northern Manitoba and Saskatchewan (including adjacent Nunavut and the Northwest Territories), and in Alaska’s Yukon River system. The Canadian region is served by a number of fly-in lodges. One of my favorites is Gangler’s on Manitoba’s North Seal River (866-515-6343; www.ganglers.com). I’ve taken numerous trophies topping 40 inches there, and I’ve seen but not caught 50-inch-class fish there as well.

A reasonable option is to use outpost camps, which are self-service minilodges offered by most area outfitters. You’ll do your own cooking and cleaning, and you won’t have a guide. On the plus side, you’re not bound to a lodge-based daily schedule, and you’ll probably be far enough away from the main lodge to have considerable water all to yourself. Such packages usually include a boat, motor, gas, cooking utensils, and bedding in a comfortably small camp, saving you at least several hundred dollars under the main lodge price.

One of the best of these deals is offered by Misaw Lake Lodge in northeastern Saskatchewan (888-756-4729; www.misawlakelodge.com). It’s small compared to others in the region, and the fishing for huge pike from late June to early September is simply extraordinary. Owner Bernie Golling’s outpost camp on nearby Patterson Lake offers four days’ unguided fishing for $1,595 per person, including groceries, a resident caretaker, and round-trip air charter from Winnipeg, Manitoba. That’s a steal.

Some remote tributaries of Alaska’s Yukon, meanwhile, are on fire. Numerous record-book pike have been taken in the last 10 years, generally meaning 50-inch-class fish pushing 30 pounds or so, and much of the potential fishing is still unexplored. The primary area outfitter is Midnight Sun Trophy Pike Adventures (800-440-7453; www.mstpa.com).

** When to Go **
Time of year is critical. Big pike are most vulnerable around spring spawning time, usually not long after ice-out, when they frequent marshy shallows typically found in the backs of bays and coves. This commonly amounts to about a three-week window, often in mid- to late June in northern Saskatchewan, for example. As the waters warm, larger pike move to the outside edges of main-lake weedbeds, where they can be caught all summer in the Far North. In lakes farther south, where a seasonal thermocline develops, the biggest pike wwill be at or below the cold-temperature zone, often so deep that they seem to disappear.

GEAR FOR GIANTS When big pike are shallow in early spring, flyfishing often outscores all other methods. The reason is simple. Already beat-up from spawning, the biggest females are also lethargic in the still-cold water. They need to be teased into striking. Unlike hard-bodied lures, big streamers can be made to suspend and flutter in front of a big pike’s nose, and that’s often what it takes. The hands-down best fly for monster pike is a black, rabbit-fur leech pattern 6 to 8 inches long. Rods of 8- or 9-weight are sufficient. In all cases, use a wire leader.

If spinning or baitcasting is your forte, try a 9-inch Slug-Go or similar soft-plastic jerkbait on an 8/0 single hook with no added weight. These, too, will suspend and can be worked slowly and teasingly. The big single hook makes it easy to handle and release fish.

Some of the best advice I’ve gotten came from a guide in northern Manitoba. “These fish have seen Johnson Silver Minnows all summer. That’s what everybody brings,” he told me. “Show ’em something else, and you’ll do a lot better.” Something else proved to be a white spinnerbait fished deep along the outside weed edges, a winning combination until my last spinnerbait was chewed to bare metal by some very large northerns.