Fifty feet of fly line is the only thing separating you from these Bahamian attack subs. 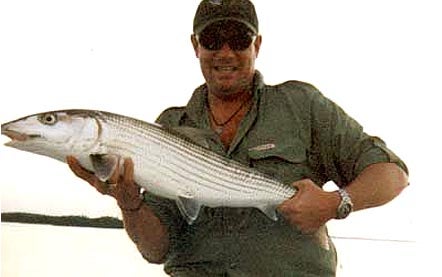 You are standing on the flat front deck of a bonefish skiff, hoping to see a fish, while a guide slowly poles over white sand shallows that stretch into forever. Enough fly line for a long cast lies at your feet. A long winter’s worth of anticipation knots the small of your back. The warm sun and soft lapping of water against the hull are hypnotic, leading your mind to wander across the intense pastels of the Bahamian landscape.

“Ten o’clock, 60 feet, cast, cast, cast!” commands the guide, startling you out of your skin. He plants the pole to stop the boat and nearly tips you off the front. You weren’t ready, not even after all the reading and the practice back home, but you struggle for balance and start false casting blindly off to the left. “Okay, drop it. Now strip. Strip,” the guide orders. “Now, long strip, long strip.”

When the guide says long strip, he usually means that he’s read the bonefish’s body language, knows the fish has taken your fly, and wants you to make a long strip to set the hook. While you don’t know any of this, at least not at first, you do know that by following his instructions you’ve hooked something that’s peeling line from your reel like a foul-hooked Ferrari, and you are grinning like a happy idiot. The long season of waiting is forgotten, wiped away by a singing reel.

**BONE CENTRAL **
One measure of any bonefishing experience is how often that kind of electricity is generated, and on Andros Island, the largest in the Bahamian chain, it happens a lot. The Bahamas are widely known as the world’s bonefishing capital, and Andros perhaps has the best of it. About 104 miles long by 40 miles wide, with a convoluted coastline bisected by several large bights, the island has hundreds of square miles of bonefish flats-more than can be fished in a lifetime. Last May, David DiBenedetto (now editor of Salt Water Sportsman) and I sampled some of the finest water when we spent three days at the Andros Island Bonefish Club, located near the North Bight on the island’s east coast. During our stay we got a taste of a variety of fishing approaches, from wading to casting from a skiff-and we caught fish in every situation.

At one point, guide Brian Leadon parked the skiff at the edge of a broad shallow bar so that we could stalk fish by wading. For nearly two hours, a constant parade of 2- to 5-pound bones moved in small groups out of the deep water and up onto the flat to feed. The hard white sand made wading easy, but so many fish were cruising by that I finally just stood in one place to cast and hook fish as they swam past.

On another day we targeted the bigger bones for which Andros is famous. Guide David Neymour ran us west to an area called Pretty Creek, which has the slightly deeper flats that larger fish seem to prefer. A stiff breeze complicated the casting, but DiBenedetto -who’s more of a spinning aficionado-managed to nail a 7-pounder amid much whooping and hollering. (You don’t have to be an expert here: The average cast is about 50 feet, although there are times when the fish are farther out.) I lost an even larger bone that took nearly 200 yards of backing before cutting the line on a coral outcropping. And we saw even larger fish than those two, including a pair we guessed to be 12 to 14 pounds that stayed tantalizingly out of casting range.

[NEXT “Story Continued…”] Big barracuda are also abundant on the flats, and I carry a spinning rod rigged with 12-pound-test line and a bright-colored tube lure just in case. During lunch, a long dark shape appeared over the white sand nearby. DiBenedetto tossed the tube lure past the interloper and then cranked furiously, knowing that ‘cudas respond to speed. After a violent strike and a some thrashing runs, DiBenedetto brought the fish in and Neymour gripped it behind the head. The fish flopped wildly, driving one of the treble hooks into Neymour’s hand, and his face turned gray.. Hooking yourself to a mouthful of razorlike teeth is not a good thing.

“It’s barbless!” I shouted, and he quickly slipped the treble free of his hand and then unhooked the fish. Bending down the barbs on both your barracuda rigs and your bonefish flies is a smart idea: It makes releasing fish easier, but it also reduces the damage if you’re snagged by a struggling fish or an errant cast. The wounds to our guide’s hand and pride were quickly mended, and we passed the afternoon catching more bonefish. At the end of the day, we repaired to the lodge’s waterfront bar where a platter of hot conch fritters and cold Kaliks (Bahamian beer) were waiting.

Trip Planner
Getting There
Andros Island is 150 miles east of Miami, Florida. Several major airlines fly direct to Nassau, the Bahamas’ capital, from which you can book Western Air (www.westernairbahamas.com) flights for the short hop to Andros.

** Lodging and Guides**
The Andros Island Bonefish Club was founded in 1984 by veteran guide Rupert Leadon, who still owns it. Its oceanfront cottages are comfortable and have private baths with showers. The daily schedule typically starts with breakfast at 7 a.m. in the central dining room. Guides have their boats ready to go at the adjacent dock by 8. The fishing day usually ends around 4 p.m., which leaves time for a shower and happy hour before dinner. A four-night, three-day fishing package is $1,541 per person, which includes lodging, meals, guide, and boat. For more information, contact Angler Adventures (800-628-1447; www.angleradventures.com).

**Fishing and Tackle **
The best months are November and March through May, but there’s some good fishing all year round. Your tackle should include a fast-action 8-weight fly rod rigged with 200 yards of backing and a floating line for bonefish, plus a 10-weight outfit for shots at barracuda and the occasional permit or tarpon. Take spinning tackle, too; it will help your odds on very windy days. The best fly patterns are Gotchas and Cowen’s Bonefish Scampis in sizes 4 and 6. On deeper flats and for larger fish, tan-over-white Clouser Minnows are a hot ticket. -J.M.