The Face of Danger

How to stand up to a cougar- or fight if you have to. 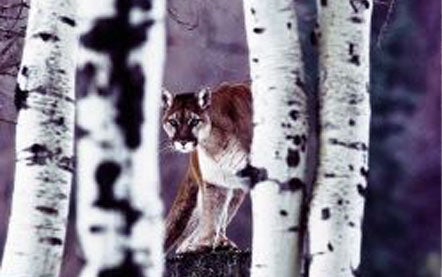 Catamount, cougar, painter, puma-humans make up many names for the predators they fear. For decades, though, the odds of a hunter or angler encountering a mountain lion were exceedingly remote. That’s no longer true.

Due to booming prey-animal populations throughout the West, the number of cougars has increased. So have confrontations with humans. Of the 20 or so people who have been killed by lions since 1870, three-fourths of the fatalities have come in the past 25 years. Mountain lions are found in the western United States and Canada (plus a small, endangered population in Florida). In Montana alone, between 20 and 40 people annually-many of them hunters-report encounters with aggressive lions. What should you do if you’re one of that number?

Avoid Confrontations
Lions look for weakness when selecting prey. Most of their attacks target children, women, and teenage males, so keep smaller members of a party between adult men. If you are hunting with a son or daughter, don’t let your child go on ahead in lion territory, especially when you are negotiating brushy areas, ridge saddles, or other natural ambush points. Also try not to assume postures that are reminiscent of prey animals, such as sitting or squatting down.

Go carefully when approaching any big-game carcasses you left in the woods overnight, or while investigating dead animals that birds or scent may have revealed to you. Cougars can be possessive of kills.

Don’t wander through lion country after dark. Radio-collar studies indicate that lions do 90 percent of their hunting at night, and this is when many encounters with hunters occur. Returning from a hunt in Montana’s Gallatin Range one Thanksgiving eve, I surprised a pair of young lions at the site of an old elk kill several hours after sunset. The cats growled at me, pacing back and forth 30 feet up the hill, leaving only after I had backed down to the Gallatin River and waded across.

Close Cat Encounters
Should you find yourself confronted by a mountain lion, follow these guidelines:

Maintain eye contact. Cougars are reluctant to attack a human that faces them head on.
** Speak to the cat in a firm, loud voice.** Do not show fear.
** Pick up children.** Try to do this without bending over. And do not crouch down or squat, which would make you resemble prey.
** Think big.** Wave your arms and open your jacket to appear larger. Show your teeth.
** Back away slowly.** Place an obstacle between you and the animal, ideally a stream or a road. Otherwise, try to get to higher ground. Being below the cat may encourage it to attack.

Give ‘Em Hell
If you are attacked, fight back. Lion attacks are predatory, not territorial like those of bears. Playing dead will just make you into a meal that much sooner. Remain upright and hit at the cat’s eyes and head using anything within reach-stones, sticks, backpack, walking staff, rod case, even your hat. Cats are not accustomed to prey that acts this way and can often be discouraged. But you don’t want to ever get into a position where all that stands between you and a lion’s canines is your hat. Carry pepper spray-it’s not just for bears anymore.