Keep on the right side of the lake this winter. 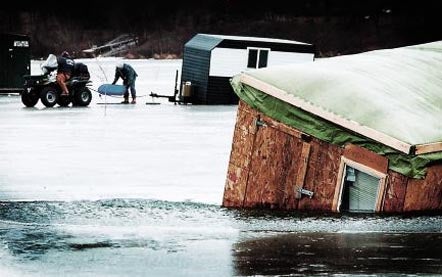 A gathering of ice fishermen looks like a church congregation: The members assume an attitude of prayer, heads bowed to holes in front of them, asking for a tug on their lines. But they would be better off praying for safe passage back to shore, for theirs is one of the most dangerous of all outdoor sports. In Minnesota alone, 130 people died in ice-related tragedies in a recent 18-year span. But that’s no reason to stay glued to your La-Z-Boy and watch NFL Sunday all winter. Here’s the knowledge and equipment you need to be safe on the ice.

Be Ice-Ready
Pick up the phone before you pack your auger. Fish and game departments, sporting-goods stores, fire departments, and sheriff’s offices can give you local ice conditions. They also can alert you to the locations of springs or inlets that may be covered by thin ice. But don’t limit your questions to thickness alone-it’s just one factor that contributes to stability. Ice that forms after a hard freeze in December will be far stronger, inch for inch, than late-winter or spring ice, which will likely have thawed and refrozen.

Whenever you’re going to be on ice, take along a walking stick and strap ice creepers to your boots for better traction and balance. It’s also a good idea to carry a pair of cut-down broom handles tipped with sharpened nails. Attach the sticks with a couple of feet of nylon cord and keep them in a jacket pocket. If you fall through, turn around to face the ice you already walked across (it will likely be stronger than that in the direction you were headed), then dig the nails into the surface to haul yourself back on top. Crawl until you reach safety.

Look and Listen
Generally, the thicker the ice, the safer (see sidebar). Cracks in clear ice reveal its thickness, but late in the season, that’s not the best way to judge stability. If snow covers the ice or you are at all unsure of its safety, use a walking stick or spud to tamp the surface in front of you as you proceed. Safe ice makes a solid, dull thump. Thin ice is resonant. Rotting spring ice will creak.

In addition, keep your eyes open for these 10 signs of weak ice:

1. A surface that is slushy or white.

2. Standing water or snow cover. Both add weight, reducing the load-bearing capacity of the ice underneath. Snow also can insulate the surface against freezing or cause the sheet underneath to deteriorate. Depressions in the snow may indicate a spring.

3. Bubbles. Porous ice is formed when the bond between ice crystals has been broken.

5. Milky, black, or gray coloring. No ice is as strong as the clear-blue or dark-green ice formed by a freeze.

6. Current. Water running underneath ice reduces its strength by 15 percent or more. Be especially careful where creeks or streams enter a lake.

**7. **Eroded shore ice. Sunlight reflecting off the bottom in shallow areas of a lake causes ice to thin.

8. Open water. No ice in the middle of a lake is a sure sign that any remaining ice is weak.

9. Debris and obstructions. Rocks, logs, pilings, and plants can weaken the adjacent ice. Decomposing vegetation does the same.

10. Waterfowl and fish. Animals circulate water, which slows ice formation. Beware of thin ice in bays where there are large schools of carp, or where rafts of geese and ducks have gathered.

Above all, use your judgment. If the ice doesn’t seem safe, don’t go out on it.