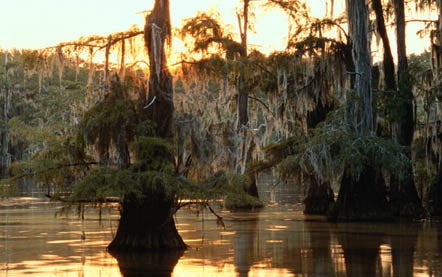 When John Davis piled decoy bags into his 141/2-foot fiberglass boat and started for Piney Island off the coast of the Florida panhandle, he knew he was heading for troubled waters. Thirty-knot winds were blowing out of the southwest, pushing a storm surge of water over the shoals and turning the tail feathers of thousands of ducks. Davis knew that those ducks would raft up in the protection of the bays and lagoons, and braving the waves was the only way to reach them. Anchoring in a channel, he put out his dekes, then drew a tarp over himself and his three dogs-Sally, a chocolate Lab; Checkers, a 6-week-old half-breed; and a fuzzy lapdog he called Little Bear.

Within minutes Davis shot a limit of greater scaup and redheads and was preparing to leave when he realized his anchor had pulled. The boat had grounded on a flat of soupy black mud. Even after Davis had moved his gear and his dogs to a spit of sand at the end of the island, he was unable to move the boat.

It was November, with temperatures falling into the teens. The wind was howling, and Davis, who had been a demolition specialist in the U.S. Army, knew that he was in as much trouble as he’d ever been in during three tours of duty in Vietnam. He had no more than a swallow of water left in his bottle, no dry matches, and no food. No one knew where he was. Nor were high tides likely to come to his rescue. He’d have to wait for another storm surge or attempt to hike 18 miles across oyster bars and sand shoals, plus swim dozens of deep water channels, to reach the safety of the mainland. To make matters worse, he’d torn one of the boots out of his waders when trying to drag the boat and knew that if he tried to walk, the sharp edges of the oyster shells would slice his foot to ribbons.

Making a crude shelter by draping his tarp over a bush, he piled up drifted seaweed for a bed and huddled with his dogs-he tucked the puppy into his coat next to his chest-to weather the storm. “Man, that was a three-dog night,” he recalls. He plucked the ducks, which the castaways ate raw for dinner. Chewy, he thought, but not bad. By dawn the storm had abated. Shaking from hypothermia, he set the puppy down between the two bigger dogs, then crawled to the edge of the lagoon, where he managed to drop a spoonbill with a longish shot. He spent the rest of the day spelling out SOS in seaweed and digging with a plank of driftwood to try to free his boat. Before high tide, Davis piled all his gear and the dogs into the boat, hoping for a flood of water that never came. He signaled with his army mirror at boats passing far offshore and once at a marine patrol helicopter searching for illegal mullet fishermen. No one responded.

For three more days and nights the pattern seldom varied. Shoot a duck in the morning, add its feathers to his bed, gnaw at the bones, itch at flea bites, signal for help. He’d dig futilely into the quicksand mud for hours, then shiver through another night of sub-20 temperatures. When the sun set on the fourth evening-four days is about all that an active man can survive without hydration-he wrapped his foot in rags, determined that in the morning he would try to hike and swim to safety. He gave himself almost no chance of survival, but at least he’d go down fighting. Anything was preferable to dying of thirst in an amphitheater of water.

Then he noticed that the spit he was camping on was narrower than before. A surge of water was pouring over the island. Summoning strength, he slogged to his boat, which was miraculously floating in the trench of mud he’d dug out with driftwood. He hurriedly piled on decoys and dogs, choked the outboard, and at 10:30 at night aimed his skiff toward the mainland and the sweetest drink of water three dogs and one lucky duck hunter would ever know.

**The Analysis **
An unabashed renegade, John Davis often prefers to hunt and fish by himself and assumes thatt the responsibility for survival rests in his hands alone. He did not file a float plan with friends or leave a note attached to his truck indicating where and when he was hunting-the first precaution all boaters should take, according to Chris Edmundson, who is director of boating safety for BoatU.S. and works with the Coast Guard to prevent boating mishaps among hunters and fishermen. Nor did Davis carry enough drinking water or a radio to call for help.

On the plus side, he wore wool clothing to combat the cold, built shelter, killed food, signaled that he was in distress, and made the correct decision to stay put. He kept his head in a situation where someone less hardy or more prone to panic might have perished from dehydration or hypothermia, or drowned while trying to swim to the mainland. When I asked him if Vietnam prepared him to survive on Piney Island, he responded, “Hell no, I hunted for food since I was a boy. Being a woodsman was the way I survived Vietnam.”

The Rules
In addition to filing a float plan, Edmundson recommends the following for boaters: ( 1 ) Carry high-energy foods, hot drinking water as an antidote for cold-water immersion, and signaling devices.** ( 2 )** Bundle up extra warm clothing into a dry bag in case you capsize. ( 3 ) Don’t overload the boat. Sportsmen-and duck hunters in particular-favor unstable craft such as johnboats, sneak boats, and canoes, and tend to overload them. When they lean over the gunwales to retrieve a decoy line or a retriever jumps into the water, the boat capsizes. ( 4 ) Always carry matches in a waterproof container and at least one other device to start a fire. ( 5 ) If you hunt saltwater, always bring emergency drinking water in addition to the water you’ll drink that day.