How to avoid the most dangerous snakes in the United States--and what to do when you bump into one anyway. 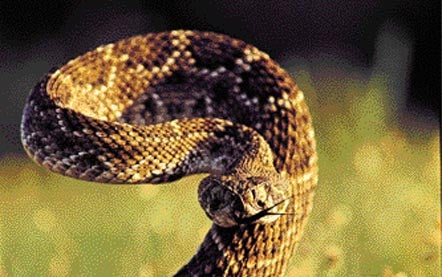 Franklin Davis liked to fish a Devil’s Horse. The surface-churning cigar-shaped lure had rewarded him with some big bass on Florida’s Lake Jackson, but something about the “fish” he’d reeled in on this hot July night wasn’t right. Not wanting to shine a light and spook fish, Davis lifted his rod to get a better look. In the instant that he realized it was a snake, the treble hook that had snagged near the rear of its twisting body slipped free, and the 2-foot serpent fell against his chest. As Davis slapped it overboard from his canoe, he felt a burning pain, like a wasp sting, in his hand.

Switching on his flashlight, he saw two puncture wounds at the base of his right thumb. Davis, of rural Wakulla County, was familiar with the venomous snakes of the Panhandle’s pine forests and swamps. Indeed, he admired snakes, including the cottonmouth moccasin, the species he was certain he’d been struck by. Remembering to keep his wounded limb lower than his heart, he trailed his hand in the water as he paddled with his left arm back to shore.

“It swelled up like a softball glove,” the 56-year-old Davis recalls now. Figuring to save himself an emergency-room fee-“in those years I had a lot of grit, but not a lot of sense”-he soaked his bloated hand in Epsom salts for two days until it gradually shrunk back to normal size.

Today, Davis counts himself lucky that his bite wasn’t worse. In fact, his reaction was typical. Approximately 7,500 cases of venomous snakebite are reported to the American Association of Poison Control Centers each year. Of those, more than a third are dry bites in which the snake has injected no venom. Davis had the most common reaction, with intense swelling and accompanying redness, moderate pain, and mild systemic signs that can include nausea, tingling of the extremities, and muscle weakness.

The only unusual aspect of Davis’ bite was the circumstance. A majority of “victims” are either drunk or screwing around with snakes, and often it’s a deadly cocktail of both. By comparison, a hunter or fisherman who sticks to his business is at very low risk. Nonetheless, accidents such as Davis’ can happen.

Keep out of Harm’s Way
Although two dozen species of venomous snakes are indigenous to the United States, sportsmen only need to recognize four varieties: copperheads, water moccasins, and rattlesnakes, which are pit vipers sporting long, hinged fangs; and coral snakes, which have short, fixed fangs and are related to Old World cobras. (See the species guide, below.)

No venomous snake in North America will deliberately attack a human. They strike in defensive situations only: when handled, trod upon, or approached so closely that they instinctively react to the danger. Considering that snakes can strike no farther than two-thirds of their body length, staying out of range is not difficult if you follow these five rules:

1) Walk heavily to announce your presence. Snakes cannot hear, but they sense ground vibrations and will often move away if they are given a chance.

**2) ** Avoid blundering about at night during hot weather, when snakes are most active.

**3) ** Watch where you place your hands when scrambling up inclines; likewise, never reach under rocks or logs where snakes hide. Camp duties such as fetching water, collecting firewood, or clearing brush are probably riskier than hunting and fishing.

4) Wear sturdy leather boots and loosely fitting pants with cuffs draped over the boot tops to reduce the chance of a direct strike.

5) Walk away as soon as you see a snake.

The last caution deserves particular emphasis. Snakebite studies reveal that more than half of the people who are bitten approached within striking range after spotting a snake from a safe distance-prodding it with a stick, attempting to catch or club it, or otherwise placcing their hands within striking range.

**What to Do if You’re Bitten **
If a venomous snake bites you, move out of its striking range, then promptly remove wristwatches, rings, or constrictive clothing near the injury. Do not use a razor blade to flush the wounds or try to suck out venom with your mouth. Do not attempt to counteract the effects of the venom with electrical shock. The safest and most effective mechanical treatment is the widely available Sawyer Extractor ($20; 800-940-4464; www.sawyerproducts.com), a pump-action suction device that, if applied within the first five minutes, can extract up to 30 percent of the venom collected at the site of the bite. Then, keeping your wounded limb at or below heart level to slow the spread of venom, walk out of the woods.

The best first-aid tool for snakebite is a set of car keys. Drive yourself to a hospital or flag down a ride. Although the bites from most pit vipers cause pain and swelling, debilitating and life-threatening reactions are slower to take effect. Stay calm. Snakes rarely inject all the venom from their glands, and healthy adults generally have several hours to seek medical help. Antivenin is usually administered within the first four hours but can be effective up to 24 hours after the bite.

If you’re with someone who is bitten, splint the wounded limb if possible. You can apply an elastic pressure bandage above the wound, but not so tightly that it prevents circulation. Don’t attempt to carry the victim if he can walk.

The general rule of wilderness first aid is: “Move the patient to treatment, and move the treatment to the patient.” Send someone ahead to call for help, so an ambulance can meet you halfway. Take vital signs at 15-minute intervals and draw succeeding ink lines around the area of swelling, but only if this doesn’t interfere with progress.

It’s important to identify the snake when safe to do so. If it’s dead, place it in a box (“dead” rattlesnakes have been known to bite!) and bring it with you. Do not make the mistake of thinking that if a bite doesn’t hurt or produce swelling, you don’t need treatment. The bites of several southwestern species, including the deadly Mojave rattlesnake, may yield little pain or swelling for up to 16 hours. Then you might stop breathing. Because the Mojave closely resembles the western diamondback, it’s best to assume the culprit was a Mojave in regions where the ranges overlap, or else a doctor may withhold intravenous antivenin treatment until the damage to your nervous system is too advanced to reverse.

The Real Threat
Through fear and ignorance, no animals in America are subject to as much persecution as snakes. Although it could be argued that venomous species should be controlled in populated areas, there is no excuse for human abominations including rattlesnake roundups and denning-site massacres. If this decimation continues, several species will undoubtedly disappear. Among the first to go will be the endangered eastern timber rattlesnake. In addition to indiscriminate killing of the species, its habitat has become so fragmented due to road building, construction, timber harvest, large-scale agriculture, and mining that it continues to exist only in widely separated island populations. Like the canary in the coal mine, its sensitivity to environmental degradation serves as a warning to all of us.

In the event that you cross paths with a venomous snake, consider yourself fortunate to be in the presence of one of Earth’s most fascinating creatures. Admire it from a safe distance, and then let it go its way. Its kind poses little threat to you. Unless, perhaps, you’re casting a Devil’s Horse in a dark southern lake.

Click here for Field Guide: Venomous Snakes of the U.S.