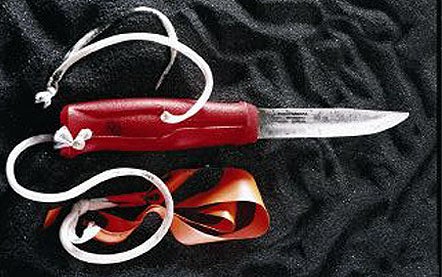 A knife is the most important tool that a man can take into the wilderness. It allows him to spark a fire, cut saplings to fashion shelter, or whittle the trigger for a figure-four deadfall trap. As master woodsman Mors Kochanski says, “The knife is the balance point for survival in the bush. Without it, you have to stay on the move. With it, you create the opportunity to rest.”

But what exactly is the ideal outdoorsman’s knife? Most survivalists cover the bases-and skirt the issue-by recommending two blades, a small knife for intricate work and a chopping blade for felling trees, limbing, and splitting wood. However, few hunters and fishermen carry axes. And in the right hands, a fixed-blade knife of modest dimensions can help a person fashion all the tools needed for living off the land. Kochanski’s concept of a bush knife won’t meet with universal agreement-there are few more hotly debated topics in survival forums-but it’s hard to dismiss the advice of a man who can topple a 7-inch-thick aspen tree in as little time as it takes to read this article, simply by pounding the point of his knife into the trunk and jerking the blade back and forth.

Points of Interest
The blade of your knife should be extremely strong, easily resharpened, and capable of holding a fine edge. If you can touch it to your throat and draw blood, whack it against a frozen deer bone without rolling the edge, and pound the tip 2 inches into a tree trunk at a right angle to the grain and stand on it without breaking it, you’ve got the prerequisites of a woodsman’s knife. In addition:

The blade should be as long as the width of your palm, with the metal extending the full length of the handle.

The back of the blade should run in a straight line with the back of the handle and be wide and flat so that it can be used with a baton (a stick used as a hammer).

The cutting edge should curve gently from tip to guard to facilitate sharpening, with the point falling in line with the center of the handle. It should also have a flat grind (hollow-ground blades bind when driven into wood). Serrations have no place on the blade of your knife-they can’t be resharpened easily and they occur on the part of a blade you need for most detail work.

A small, lower finger guard is acceptable but not necessary. An upper guard is an abomination, interfering with placing the thumb or forefinger along the top of the blade for control.

The butt should be flat and durable enough for you to pound on.

Many commercially made blades meet these requirements, but most are heavy and expensive. Kochanski, who conducts a school on bushcraft in British Columbia, recommends that his students learn basic skills with the Swedish-made Mora knife, which costs about $10 and has been the woodsman’s standard for centuries. A Mora is lightweight, so it can be carried on a cord around the neck (sheathed), where it’s least likely to be lost. In addition, several models are available with carbon rather than stainless-steel blades, which allows you to strike sparks with a flint.

Keep in mind that a knife is only as good, and as safe, as the person who wields it. Its primary functions-making traps, butchering game, rendering tinder, whittling bow drills, slicing wedges for log splitting, felling saplings to make shelter-demand skills that are best learned by studying with a master.